The Zoological Society of London: a week with Jenny Jaffe 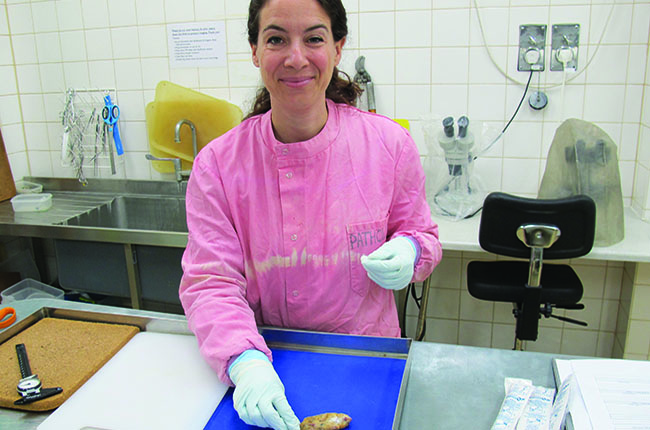 My morning commute is a 40-minute bike ride through London’s highlights – I enjoy counting the press tents near the Houses of Parliament, the protesters in Whitehall, across the road from Downing Street, and the tourist groups in Trafalgar Square and Piccadilly Circus.

It’s a miracle I have arrived alive today as I was particularly distracted by a pedestrian walking what appeared to be an elongated Chihuahua puppy. As I cycled past her, it turned out to be a ferret! Thankfully my working hours at the Institute of Zoology (ZSL) are flexible, meaning I can start around 10.30 am and avoid the extreme gridlock of Monday’s rush hour.

I start the working day by following up on some of the contacts made at the BIAZA (British and Irish Association of Zoos and Aquariums) native species conference I went to last week. The conference discussed the importance of responsible reintroduction of wild animals.

My presentation at the conference highlighted the importance of disease risk analysis during the planning phase of translocations, and of post-release health surveillance. As part of the latter, we receive red kites found dead for postmortem examination; these are descendants of birds first released in the 1990s.

The post room calls me about a package that had got lost in the mail – a red kite submitted more than a week ago that was suspected to have been shot. The box does not smell as bad as expected, and without opening it I take a quick radiograph to check for shotgun pellets or fractures. None are seen so, for now, the package goes into the freezer.

In the afternoon I meet with my boss to discuss upcoming visits to captive breeders of sand lizards. We plan the structure of the visits and what we will need to bring for the clinical examinations and sampling.

After work I cycle to a pub in north London as I’ve been invited to see a colleague’s favourite metal band perform. The audience consists mainly of other musicians, and of the girlfriends of the band members (including my colleague). Despite metal not being my usual genre, I have a thoroughly amusing evening.

Today, two captive bred corncrakes arrive for postmortem examination. As my normal pathology technician is off (she works parttime), I cajole our microbiology lab technician to help me out taking samples, weighing organs and the like. I can do it on my own, but I much prefer having both assistance and a bit of company!

At 5 pm I head to the tearoom where my colleagues have organised drinks before the annual ZSL summer barbecue – rum punch and caipirinhas create a festive atmosphere. While everyone else is queuing for the burrito food truck, I get some glittery face paint, which is normally reserved for children who visit the zoo.

My colleagues remark that I was not 100 per cent successful at removing all yesterday’s glitter from my hairline, despite my best efforts at scrubbing it off. I do have a meeting in the afternoon, but it’s relatively low key, with researchers at the Institute who are preparing a room for captive breeding of a species of rare spider.

Jenny at the Zoological Society of London

They are planning to reintroduce them in a few years’ time. We discuss the plans and inspect the room. Afterwards I e-mail them a report with recommendations from a disease risk perspective – how to create an effective quarantine barrier and other biosecurity measures to prevent indirect contact with other spider species carrying known or unknown diseases. There are some old cobwebs in the corners, which brings home the importance of ‘spider proofing’ the room.

I wangled some free tickets to see a Shakespeare play after work, through a former ZSL colleague who now works at a theatre agency. It’s good fun but the heat does mean I nod off a few times during the second half. This might have limited my understanding of the plot somewhat.

Today I make a concerted effort to address all the pending comments on a paper I’m coauthoring on poisoning in red kites. They are exposed to lead, pesticides and especially rodenticides through the mice and rats they eat.

Once I get ‘into the zone’ it is quite satisfying and I end up working on the manuscript till I get kicked out by security at 10 pm.

I continue fine-tuning the red kite manuscript, updating a dot plot to illustrate the correlation between haemorrhages and levels of rodenticides in the liver.

In the afternoon I head to the postmortem examination room to take swabs of all the red kites submitted during the avian influenza outbreak – defrosted after a stay in the freezer archive. We will send the swabs for analysis and if they are all negative we can go ahead with the full postmortem examinations later.

The delayed package I received at the beginning of the week turns out to contain a completely desiccated carcase, explaining the lack of pong!

After work I head to the zoo’s main lawn with my pathology technician. We are here for science outreach to the thousands of visitors flocking to the Zoo Nights event, and enthuse about ensuring the health of reintroduced dormice, pool frogs, wart-biter crickets and more.

As there is a ‘wildlife crime’ theme, we show them radiographs of red kites with clearly visible shotgun pellets. It is rewarding as the people we speak to appear to be genuinely interested in what we do.