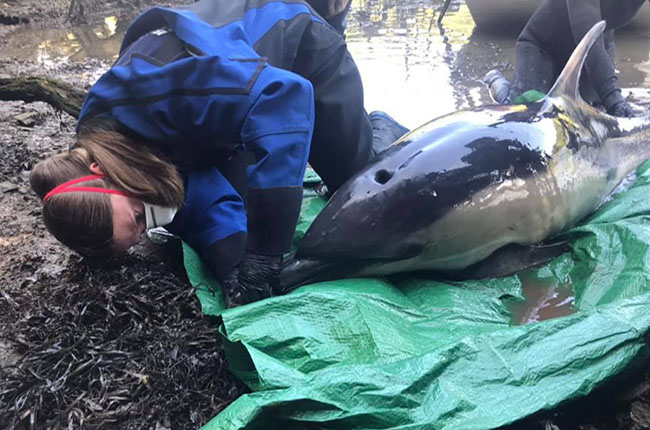 My alarm went off at 5.30 am this morning. Despite the rude awakening at an hour I rarely see, it took little motivation to get myself up and out of bed. Not long after, I was exhausted, ascending a rope leading up a slippery cliff with a three-day old, 12 kg grey seal pup wriggling around in a bag – custom-made for seal pups – on my back. These bizarre moments happen not too infrequently in my job, and they never fail to make me smile.

My official role is as its national veterinary support coordinator, which essentially means I am tasked with getting vets and vet nurses involved with our work. This might be by raising awareness of what we do, or by providing training, creating learning resources and encouraging discussion and knowledge sharing between our veterinary volunteers. 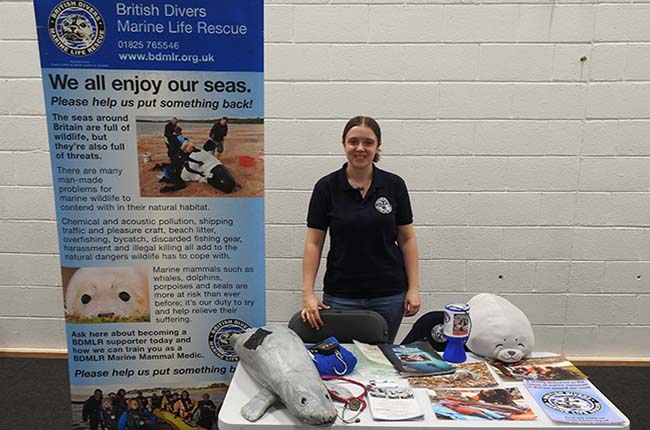 One of my tasks is raising awareness of what we do

I also keep up to date with the latest in marine mammal rescue and medicine research, and communicate with international experts to ensure our protocols offer the best chances of success for the animal, whatever it may need.

I have a clinical role too. First, as a BDMLR vet consultant, I am on-call 24/7 to assist over the telephone with incidents all over the country. This may be advising a volunteer on whether a seal pup needs to be taken in for rehabilitation or talking a vet through how to euthanase a dolphin, or deciding whether a stranded cetacean is well enough to be refloated.

Assessing complex situations over the phone can be difficult at times and certainly has helped to fine-tune my communication skills.

'I’ve always had a soft spot for anything marine-based'

Second, as well as going out on seal pup rescues, I manage and provide the veterinary care for a grey seal pup facility in Cornwall. There, we provide temporary, initial care for rescued seal pups while they wait for space to become available for them at one of the local rehabilitation centres. I work alongside a dedicated and enthusiastic team of volunteers. During the last grey seal pupping season we cared for 81 seal pups in total (although our record is 144, which was set during the 2017/18 season).

Finally, I respond in-person to cetaceans that strand around my local coastline in Cornwall. These are some of the most demanding incidents that I attend. Each one is unique and presents its own set of challenges. I might be dealing with a 1 m harbour porpoise or a 19 m fin whale. I might be in the blazing heat, the freezing cold, or thick mud. I might have a crowd watching or the media present, but it’s almost guaranteed that I’ll end up physically and mentally exhausted – hopefully either thrilled that the animal has been successfully refloated, or satisfied that I was able to prevent further suffering having performed a euthanasia. 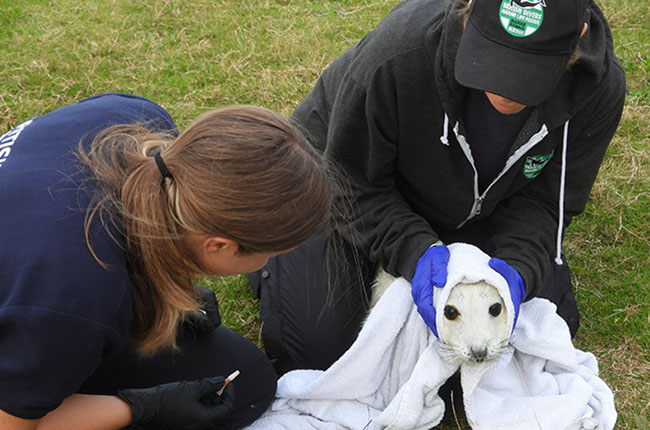 I am quite frequently asked how exactly I ended up in this field, and I must admit that sometimes I ask myself the same thing!

I had always wanted to work with zoological collections or wildlife, and spent as much time as I could – before and during university – working within zoos, always with a soft spot for anything marine-based.

I graduated from the Royal Veterinary College in 2016, still with an aim to work with wild animals in some capacity, but wanting to cement my learning in small animal general practice first. I did this for three years, during which time I joined BDMLR (www.bdmlr.org.uk) as a volunteer ‘marine mammal medic’ and spent ever-increasing amounts of time helping out at rescues and at the seal pup facility. Eventually I moved to working part time in practice so I could spend more time volunteering. I also started an online masters degree in conservation medicine with the University of Edinburgh. I am just entering my third and final year of the course, having thoroughly enjoyed it so far, and feeling much better prepared for a career in wildlife medicine and conservation.

'Working with wildlife has its highs and lows...we make the most of positive outcomes'

As I approach two years in my job, I can honestly say I have not looked back. Working with wildlife offers an opportunity to feel part of a bigger picture. We don’t just think about the animal in front of us, but the population as a whole, and how that population interacts with the other intricate components of the ecosystem it is a part of.

Wildlife presents different challenges from general practice. I think in some ways it is easier (there are no owners, for example), but in other ways it can be just as hard (particularly regarding ethics). 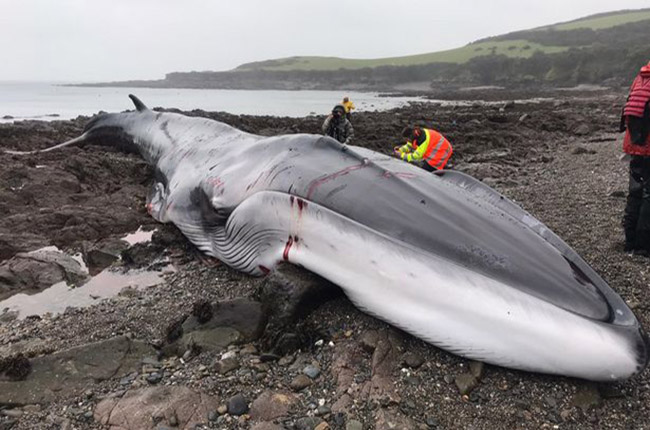 Teamwork is vital in this role, both on a large scale (forming collaborations between organisations) and on a smaller scale (such as leading the volunteer team responding to a cetacean stranding).

You also need the ability to communicate sometimes complex or difficult messages to a range of audiences – the general public, trained volunteers, vet professionals and international experts. Imagine, for example, arriving on a beach and having to explain to a crowd the reason why you need to euthanase the dolphin they had been looking forward to watching being refloated and released.

My tip for new graduates is to be prepared to find yourself in situations where you don’t have all the answers at your fingertips. At times like these, you need to be able to apply basic principles and, importantly, accept that it’s ok not to know everything.

This was particularly true for me when I first started responding to marine mammal call-outs. I knew if I wasn’t careful, there was the potential to have my confidence knocked.

I’ve tried very hard to keep a positive mindset when faced with something out of my comfort zone, seeing it as a chance to learn and being kind to myself when I can’t see any obvious answers.

To return to the plight of the seal pup…having become separated from its mother at only a few days old, it had not had the opportunity to put on the weight necessary to survive on its own. In this situation, removing it from the wild for rehabilitation heightened its chance of survival and eventual release.

Although it’s not every day that my job presents adventures like these (a significant proportion are spent at my computer), they are the kind of experiences that drive me forward. Working with wildlife can certainly have its highs and lows, so you have to make the most of the positive outcomes.