Working in pharmacovigilance at the Veterinary Medicines Directorate 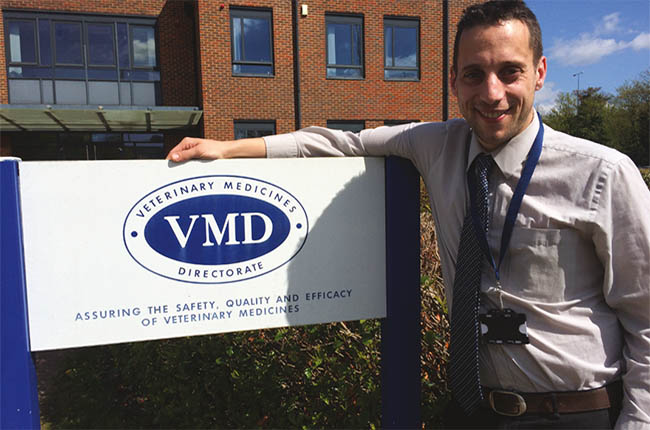 I didn't always want to become a vet. My first career aspirations were to be a chef, then a barrister and then maybe a doctor. What made me choose this path was a combination of the fear of other medical students practising taking blood from me and experiences of taking my cocker spaniel, Hobson, to the local vets. I arranged my work experience at this practice and thoroughly enjoyed it, but only a few weeks later, the day after I got my GCSE results, I was back there to have Hobson put to sleep. The amazing way the Australian vet, who I'd been working alongside just a few weeks previously, looked after him stays with me today as an example of the perfect euthanasia.

I continued to see practice there during my A levels but, despite gaining the necessary grades, I had no offers from any of the vet schools, so I set off on a road trip around the country, knocking on doors. Most of the universities politely declined to see me, but I think both Scottish institutions were impressed that I had driven up from Buckinghamshire and gave me their time and advice: I needed more large animal experience. Having spent two weeks on a pig farm, I arranged a month on a dairy farm where it later transpired one of the Spice Girls was living. It was during this period that Liverpool offered me a place for the following year. Once I had finished my dairy farming placement, I found some decently paid work (cashiering in a high street bank and silver service waiting) before travelling to Zimbabwe for three months to see practice in completely different surroundings, as well as going on safari, before knuckling down to five years of hard study.

I graduated from Liverpool in 2003 and, having completed my elective in farm animal medicine, I was keen to apply this knowledge. I was lucky enough to gain a position in a mixed practice in Lancashire, and started working before my graduation ceremony.

Practice was a steep learning curve, but I soon gauged how best to deal with different types of owners, as well as their animals. Sometimes the odd white lie was necessary; when asked if I was from ‘farming stock’ I would correctly say my parents weren't farmers before somehow implying that the rest of the family were. Similarly, having got two speeding tickets within a month of starting work, I realised that however urgent the farmer said it was, a few more minutes on the road wouldn't matter as long as I put in some wheelspin when pulling into the yard.

After 18 months I realised it wasn't possible to achieve case continuity by flitting between small and large animal duties, so I decided to focus purely on small animal work as it let me claim back the use of my car boot and required slightly less showering after each callout. I started working in one of the branches on the coast, and when one of the partners left I took on additional management responsibilities. I enjoyed the extra challenges and became increasingly involved in practice management and finances while also continuing to develop my clinical skills.

Eventually, however, I began to question whether this was something I wanted to do for the next 40 years and started to look at alternatives. I investigated other practices and charity clinics but felt drawn towards a complete change. I had interviews with several pharmaceutical companies but each time the answer was the same: ‘We were very impressed with you but we had another candidate with more industry experience.’ It was then that I first applied for a job at the Veterinary Medicines Directorate (VMD). The application form was unlike anything I had ever seen before but, by taking the time to read the guidance, I managed to get an interview and passed the board to become a reserve candidate; I had been pipped to the post again, but was recommended to apply for future positions.

By this point I felt I had outgrown where I was and took a sole charge job in Manchester, selling my house in Lancaster and buying one off plan, which was completed four months late. Only three months after I moved in, just as the credit crunch started to bite, a job came up at the VMD again. Bad timing aside, I realised this was an opportunity I had to take.

I started at the VMD in November 2008 and immediately embarked on another steep learning curve as the skills needed are quite different from being in practice. The VMD employs almost 20 vets in a variety of roles and I started out assessing pharmaceutical products to determine whether they were safe and efficacious for the animal. Scrutinising clinical studies that run over several hundred pages and summarising your findings succinctly so that assessors from other scientific disciplines or European countries can understand your concerns is very different from spaying a bitch. Having multiple applications on your worklist, all running to strict deadlines, also means that you have to plan your work much more than in practice, where you just work your way through appointments or operations.

The work is demanding but also very stimulating, using knowledge I acquired at university but never used. The ability to work flexitime with no on-call is an added bonus. I have also been able to apply my veterinary knowledge to inform policy decisions and have got involved in other activities such as helping to improve career development pathways for vets throughout the civil service and promoting the VMD's work at veterinary congresses, agricultural shows and pet exhibitions.

After four years, I had the opportunity to move to the ‘other side’ of the VMD, heading up the pharmacovigilance unit, monitoring reports of adverse events in animals, people and the environment following use of veterinary medicines. As well as adverse reactions, we also look into cases of suspected lack of efficacy, which is becoming more important in light of anthelmintic and antimicrobial resistance. It is an exciting time to be working in this area and, as the UK receives more reports than any other country in Europe, we are increasingly moving away from focusing on individual cases and instead applying statistical techniques to analyse the data on a much wider scale.

Again, this was another steep learning curve as I got to grips with a new set of legislation and guidelines, all of which are due for review shortly, so yet more change is in the pipeline. In the meantime though, there is plenty to challenge me. I recently chaired an international teleconference with representatives from across Europe and North America to harmonise the way we code adverse events; and my work has taken me as far afield as India to help Madras Veterinary College set up a pharmacovigilance scheme.

We launched our microchip adverse event reporting scheme at BSAVA congress this year, and are working with veterinary practice management software providers to see if we can make reporting adverse events easier for vets, so that it can be done with a few clicks from within a patient's record. Getting more reports will help us identify emerging problems and let the profession know even sooner.

And in case you think I hated working in practice, you'd be wrong; I have continued to work on Saturday mornings at a local practice, which helps me stay in touch. For some reason all adverse reactions seem to be booked in for me; I can't imagine why!