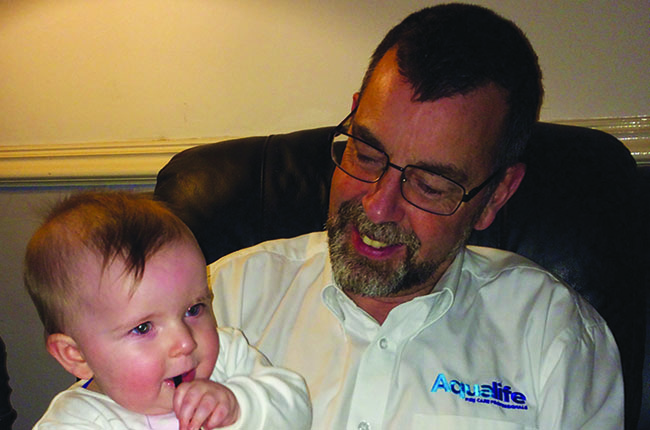 My career has certainly been anything but boring and, I think, isn't a bad example of the varied paths along which a veterinary degree can lead. I have been a production animal vet and a companion animal vet, employee and employer, worker and manager, and a variety of other things along the way. Now, in my 36th year since graduating, my working life has 2 main strands: business manager and fish vet. Finding a balance between those elements is not always easy but it's a lot simpler than finding the work-life balance that is essential to having any sort of career at all.

Last year I wrote a review of the role of vets in aquaculture for Veterinary Record (Soutar 2015), so I won't discuss the details of the job here. My route into fish medicine, though, probably typifies my approach to career development. It wasn't driven by a burning desire to help fish – indeed, I knew very little about farmed fish at the time. Rather, a series of things came together to lead me in a very fortunate direction. A friend of a friend was an early entrant into the world of salmon farming and, over a New Year dram when I was a vet student, had told me that aquaculture was the future and that it would need vets. Although theoretically interesting it was certainly not for me – I was going to be a traditional, mixed practice vet when I graduated. And that's what I became, working in a variety of practices across the UK and generally enjoying myself.

"The mix, as for many vets, was all work and no home life at that time"

8 years after graduating though, practice life had lost its sparkle. From a non-farming background, I had found large animal work less fulfilling than I expected: too many entrenched ideas, too much short-term focus. I had drifted into companion animal work in a busy south-east England practice with a one in three out-of-hours rota. I liked making a difference to the lives of individual animals and I enjoyed interacting with their owners. I'd been offered a partnership, yet nothing that came through the door seemed to offer the intellectual challenge I was looking for. I wasn't settled. The mix, as for many vets, was all work and no home life at that time. I had married a fellow vet student and we had two wonderful children, but I saw more of my patients and clients than I did of them. Both Scots, my wife and I were a long way from family and in a cultural environment with which we weren't entirely comfortable. We wanted to be back in Scotland, certainly before the children started school. But how, and to do what?

Maybe it was that old Hogmanay conversation, or the news about salmon farming's rapid development, or maybe that an old friend and colleague had entered academia, researching fish diseases. Whatever the elements, they came together to present aquaculture as just the opportunity I was seeking, so I went back to university. To Stirling this time, and an MSc at the Institute of Aquaculture. Moving from wage-earner to student, with a family to support, wasn't easy but a Natural Environment Research Council grant made it possible, as did the difference in property prices between Kent and Scotland.

Apart from new friendships, which have lasted over the years, the degree led to a job in the university's fish diagnostic service for a year, and then another opportunity – the chance to become one of the first salmon company in-house vets in Scotland. That meant dropping the PhD I'd started (one of my few work-related regrets), but it was the right move. Being within the company meant that I could really make a difference to fish health and welfare. This was production animal medicine on a grand scale and the link between healthy fish and healthy profits soon became obvious. That led me away from hands-on vetting into production management, and to some of the most challenging and fulfilling years of my working life.

The balance wasn't right though. As I threw myself into this new exciting area of work, I threw away my marriage. Highland Scotland offered little opportunity for my wife to reboot her own veterinary career. While I got to work across some of the most beautiful parts of our country and whizz off to amazing places like Norway and Iceland, she got to stay at home in rural Argyll. There were other factors, of course, but that imbalance between our lives played a major part in our separation.

Ironically, this led to me focusing far more on my relationship with my children, altering my work-life balance once again. Decisions on when and where I would work came to be judged against their impact on when and where I could see my daughter and son. So, when there was a major downturn in the Scottish aquaculture industry at the end of the 1990s and I had to choose between travelling more within the industry or leaving it to do something else, there really was no choice. A voluntary redundancy settlement gave me just enough to purchase a struggling one-man practice in Inverness, close to where my children lived, and the chance to put into practice what I had learned about management.

"The practice became profitable, then we merged with a larger local practice and I took over the running of the whole thing"

It didn't take too many refresher courses to get back up to clinical speed, and I was soon enjoying small animal vetting once more. The practice became profitable, then we merged with a larger local practice and I took over the running of the whole thing. I saw my children regularly and have been lucky enough to maintain a great relationship with them both.

The cloud of difficulty over the end of the fish farming job was not without a silver lining: a supportive work colleague became my new life partner and is now my wife and greatest support. Fun as practice was, I realised that I enjoyed management more than being a small animal vet, so when yet another opportunity came along, I didn't hesitate.

I took over the management of the Dick vet school's hospitals and practices, with a focus on their commercial development. Another series of balances followed; between academic aspirations and commercial needs, between egos and practicalities, between clients and clinicians, between the needs of students and patients. It was hard work and a lot of fun, but aquaculture was calling me again.

I left Edinburgh in the summer of 2013 to venture into consultancy, realising that my veterinary degree and the experience I had gained along the way had opened up the world to me. I tried my hand at business consultancy and in fish health and both paths seemed to lead to enjoyable work, while not impacting too much on life outside of it.

I now have a small share in one of Scotland's leading veterinary practices and I do my bit on the management side. My main day job, though, is leading the world's largest provider of fish vaccination services, with responsibility for protecting over 100 million farmed fish each year. I get to do some fish vetting too, helping in the fight against sea lice and problems such as those affecting gill health.

Looking back, I can't grumble about the opportunities that have come my way. Even things that seemed negative at the time have given me the chance to explore new avenues; the balance seems to work over time, given a chance. That's true outside work too – out of that first failed marriage has come one of my greatest joys: a granddaughter born last year. So my career advice would be – don't over plan it. Look out for opportunities and go for them. As we say in fish farming, ‘Carpe carpio’ – seize the carp!