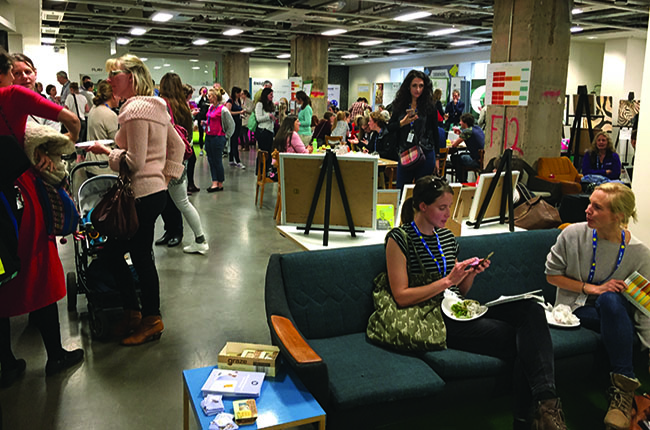 ‘This feels like the day a huge penny dropped for the profession’, was a comment overhead during last weekend’s Vets: Stay, Go, Diversify LIVE event, which was held in London.

The two-day event focused on positivity and possibility, it was a space for making connections and ‘shining a spotlight on the person behind the vet’. Vets: Stay, Go, Diversify began as a Facebook group just over a year ago and now has approaching 9000 members. Ebony said that her inspiration for starting it was the result of too many phone conversations with friends disillusioned with their vet career.

Organiser, Ebony Escalona said the event was aimed at three groups: the ‘I’m lost, can you help me’ group, the ‘I want to get to another place’ group and the ‘I’m nailing it, how can I help you?’ group.

Encouraging vets to explore their potential

Too many vets are in a fixed mindset about their career, she said. They needed to be encouraged to explore their potential: ‘We are like a Swiss army knife. We have many implements/skills – we can choose an implement we want to sharpen and drive it forward. Then, when we’re done, we can pop it back and take out the next tool.’

Of the 300 people at the event (100 others joined online) half worked in practice, 28 per cent described themselves as ‘diversifying’ and 5 per cent said they had left the profession.

Using smartphones, the audience could ask questions and engage with straw polls. For example, asked what they found most difficult about working in practice, practitioners identified working hours and patterns and the lack of career development as the challenging. The most rewarding thing about their job was the opportunity to interact with people.

First day of the event

On the first day of the event, delegates heard from speakers in the ‘nailed it’ group, working both in and outside the profession, using the transferable skills their veterinary training had provided.

Niall Connell, RCVS junior vice-president, described life since being diagnosed with multiple sclerosis. At the time, he said it felt as though doors were shut to him, but that now it was hard to believe that he had ever thought he faced a future of doing nothing.

James Greenwood, a potter and vet who has appeared on Blue Peter, said he had considered leaving the profession. He described how he took time out, did a lot of self-reflection, found pottery and discovered that he missed people and animals. Now, he combines the two and advocates craft as mood enhancer.

Small-group workshops and career discussion panels took place on the second day. At these, career ‘pioneers’ shared know-how and aimed to boost confidence and ambition to help participants on the journey to their next career destination.

Billed as ‘a passport to an incredible veterinary career’, the speakers provided inspiration and challenge to encourage people to explore new ideas.

‘Positive and hopeful’ were words that were commonly heard during the event. Others said it had rekindled their passion for being a vet, and that they had gained the inspiration to choose to be happier and the tools to achieve it.

The first Polly Birch memorial award was presented to Cal Major, a vet and environmentalist, who set up Paddle Against Plastic to highlight the issue of plastic pollution.

Cal is about to begin an expedition stand-up paddleboarding from Land’s End to John o’Groats – a journey that will involve mostly ocean paddling, but with some canal paddling too. It has never been attempted before.

Alongside encouraging others to make small changes in the way they use plastic, she will be raising money for two charities – Vetlife and Samaritans – in memory of her friend and RCVS council member Sarah Brown, who died last year.

Competent paddleboarders are invited to join her for some sections of the route. A tracker will allow people to follow her journey on Facebook.