Volunteering and distance learning in Bangladesh 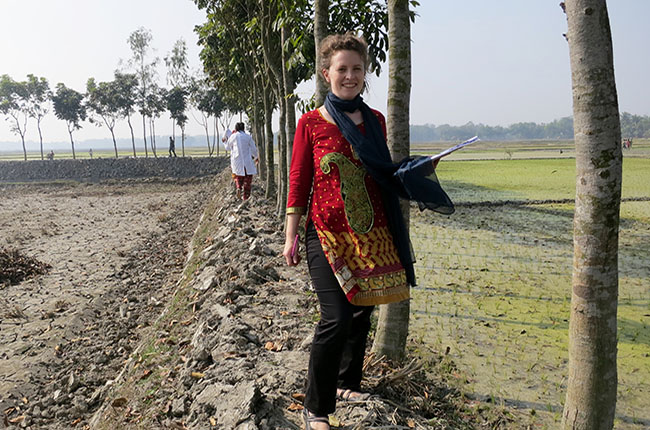 As a veterinary officer with the State Government of Victoria, Australia, I had always wanted to volunteer overseas to share my knowledge with those in less well resourced countries and, in turn, gain an insight into disease control in an endemic, low income context.

My employer was very supportive of my desire to work overseas and granted me leave from my job so that I could accept a volunteer role in Bangladesh with the Australian Volunteers for International Development programme, an Australian government initiative.

I was placed as a disease surveillance and epidemiology officer in Bangladesh with the Food and Agriculture Organization (FAO) of the United Nations (UN), where I was involved in a project to strengthen emergency preparedness for and response to highly pathogenic avian influenza. Avian influenza impacts on both animal and human populations in Bangladesh and can cause high mortalities in susceptible poultry populations. It therefore threatens the livelihood and even the very existence of farmers and their families.

I am motivated by the fact that improvements in livestock production, such as disease control measures, have been shown to help alleviate poverty in vulnerable groups, such as women smallholders. In turn, increased female wealth has a positive influence on childhood education rates, health and population control. I have a fundamental belief that it is important for people in developed countries to transfer knowledge and technologies to low income countries, as this can quickly improve living standards and self-sufficiency.

While working in Australia, I began studying the Masters in Veterinary Epidemiology and Public Health, which I completed while living in Bangladesh. This programme is developed and managed by the Royal Veterinary College, University of London, and can be studied worldwide by distance learning. One of the reasons I chose the course was because it was both internationally recognised and also flexible, enabling my studies to fit around my work commitments.

"While working in Australia, I began studying the Masters in Veterinary Epidemiology and Public Health, which I completed while living in Bangladesh"

I found the best part about being a student was being challenged to learn on a daily basis, and then being able to apply that to my job. What I enjoyed most about the course was its practicality, both in applying it to my job in Australia, and to my volunteering in Bangladesh. For instance, I completed an assignment last year on designing a course on geographical information systems, and I'm about to give that to several veterinary epidemiologists in Bangladesh, to enable them to map disease outbreaks.

Challenges of a different culture

One of the challenges of taking on an assignment in a new country is effective communication. In Australia, communication, both work and personal, is often electronic, whereas in Bangladesh it is very important to talk to people face-to-face or by phone. I have come to value the more personal Bangladeshi approach in this respect.

For anyone considering volunteering in a low income country, I recommend undertaking thorough background research on the organisation you are planning to work in, including speaking to past or current staff to ensure that you share the organisation's vision. In Australia, I have friends who have volunteered with the Australian Volunteers programme and spoke highly of it, and other colleagues who have worked for the UN who had experiences that were unparalleled.

"Learning about the culture, customs and country before I left Australia helped prepare me (to a degree) for Bangladesh"

Living and working in a new country is rewarding, but it can also be challenging. Learning about the culture, customs and country before I left Australia helped prepare me (to a degree) for Bangladesh. It is also a good idea to try to learn at least a little of the language of the country before you go there. I am lucky to have friends in Australia who were born in Bangladesh, so I could talk to them about what I should expect and learn (very) basic Bengali. In 2012, I celebrated Bangladesh New Year in Australia with these friends and my local community; this year, I celebrated with millions of people in the streets of Dhaka.

Participating on the volunteer programme has given me some invaluable insights. Instead of trying to maximise profits as with private organisations, non-government and intergovernmental organisations focus on maximising benefits to stakeholders, such as communities or farmers. While there are similarities between working in government and with an international organisation, there are also noticeable differences. The focus shifts to project-based work rather than ongoing periodical tasks, and accountability is to donors rather than taxpayers.

Experience of a lifetime

Volunteering in Bangladesh has been the experience of a lifetime. I have learnt so much both personally and professionally. I have particularly enjoyed the opportunity to work directly with the Government of Bangladesh veterinary epidemiologists, providing support, advice and assisting with capacity building. The achievements of my colleagues and government staff are so impressive, particularly given the limited resources available.

Working for the UN in-country, I have also gained an incredible insight into the role of intergovernmental organisations on both a global and a local scale. Learning about another way of life has also been stimulating and exciting.

What I have enjoyed most about volunteering is the passion my colleagues have for their work and how this can have a positive impact on the local communities. Their attitude, dedication and enthusiasm, despite the daily challenges they face, are an incredible motivation and inspiration.

▪ Information on volunteering with the FAO

▪ Information on postgraduate programmes in veterinary health by distance learning