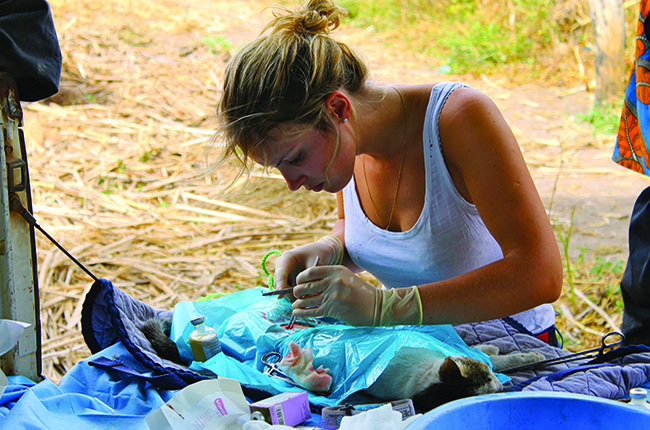 The best piece of advice I was given during my final year of university (when speaking about my dreams of equine surgeon grandeur) was not to get into an equine job straight away. Heeding that advice, after graduating I set out in search of that elusive job in mixed practice and found myself in Suffolk, in a delightful country practice. Soon enough, however, the realities of new graduate equine work bugged me enough to put me off it altogether...back-breaking hours of amateur teeth rasping; driving 45 minutes to do a vaccination only to realise I'd left it in the practice fridge; standing in a muddy field at midnight with frozen fingers wrestling with a colicky horse and dealing with the poorly concealed look of disappointment on the faces of the middle-aged owners who were expecting the experienced, male boss to look after their ‘grand prix hopeful’ cob. Instead, I found my passion lay nearer good tea making facilities and in the realm of small animals. I am pleased to say I have not looked back.

Driving from UK to Gambia

After a year of finding my feet in Suffolk, the opportunity arose to go on an adventure. My boyfriend (an equine vet) hatched a plan for us to drive a 4 x 4 from the UK to the Gambia Horse and Donkey Trust (GHDT) in West Africa (4000 miles to be exact). Once there we would donate the vehicle to the charity to be used as a human and animal ambulance and run mobile vet clinics in the surrounding villages.

We set our fundraising target at £10,000 and before we knew it we were heading due south, bound for Africa. Surprisingly, our journey was without hiccup, although we did have some difficulties at the Spanish-Moroccan border in Ceuta trying to explain in broken Arabic and French that we were not smuggling drugs and that our deregulated Spanish vehicle was not stolen. The border guards seemed a little dubious, but after a few hours of headshaking and deliberation over some non-POM-V fly repellent – and emptying our entire vehicle – they seemed satisfied and allowed us through.

"Our daily routine involved driving out to markets to run mobile vet clinics, where it was not uncommon to arrive to find a queue of 20 to 30 local people and their animals waiting for treatment"

We stopped en route to deliver some supplies to the American Fondouk, a great veterinary charity that is run by Gigi Kay in Fés, Morocco. We spent a week or so pitching in with some interesting vet work there before continuing on the last leg of our journey to the remote village of Sambel Kunda in the Gambia. And after just three weeks, one speeding ticket, 25 local hitchhikers picked up and dropped off, and not too many ‘domestics’ over map reading, we reached our final destination, albeit a bit sweaty and very dusty (a bad combination as it turns out).

The GHDT is located deep in the African bush with an incredible backdrop of mud huts, baobab trees, grassy plains and ubiquitous bird-life. Heather Armstrong, the inspiring director of the GHDT cofounded the charity with her late sister to provide much- needed veterinary care to the region. The local farmers depend heavily on working animals to provide for their families, so the importance of keeping their animals fit and disease free is clear to see. The charity relies on its delightful and hardworking employees (local vets, technicians and yard staff) in collaboration with foreign volunteers, as well as Heather's tireless work from the UK, to keep everything running smoothly.

Our daily routine involved driving out to markets to run mobile vet clinics, where it was not uncommon to arrive to find a queue of 20 to 30 local people and their animals waiting for treatment. The jobs ranged from a quick teeth rasp or worming treatment to planning the logistics of getting serious cases into the clinic for intensive care. Often this meant sitting atop a donkey on the back of a pick-up for an uncomfortable journey back to base. 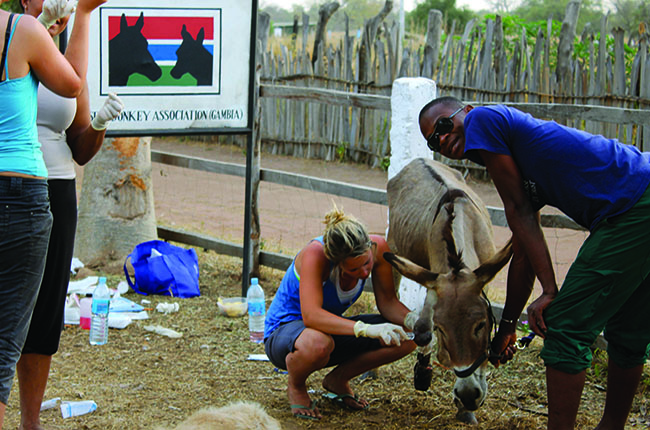 Local farmers depend heavily on working animals to provide for their families, so the importance of keeping their animals fit and disease free is clear to see

With all these large animals around, the small animal vet in me was yearning for a bit of action, so we organised to go out to the surrounding villages and run neutering clinics from the back of the truck. Looking back, it really was the most bizarre situation, where pet owners emerged from the surrounding mud huts with dogs and cats on bits of string and I would do the ops, sometimes with leaves falling on the surgical site and villagers craning over my shoulder to have a look. It was an experience nonetheless!

By and large, the Gambians have a huge amount of respect for their animals and, thankfully, cruelty cases are few and far between. Sadly though ‘local medicine’ still goes on, such as burning the roof of the mouth to treat inappetence; shoulder and limb firing; blood letting to get rid of toxins; and pouring battery acid onto wounds to make them heal faster (a no pain, no gain philosophy). Such acts highlight the importance of education, particularly of the children who look after these animals, so that these practices will eventually die out.

The region is poor and blighted by endemic diseases such as trypanosomosis and epizootic lymphangitis. Much of our day-to-day work involved treating these debilitating diseases and collecting samples for a Glasgow- based study into a new, rapidly fatal neurological strain of trypanasome.

As with many parts of the developing world, a major threat to equine welfare is the effect of poorly designed packs and harnesses, combined with overwork. One important step is to replace the traditional mouthpiece (which can be as inappropriate as a length of string or barbed wire) with proper metal or rubber bits donated from the UK. Padding is also important (often in the form of donated numnahs), but the real progress is made in addressing the harness design, thus preventing the sores from developing in the first place. This involves working closely with the local harness makers and traders to implement changes in harness design, an initiative that is making steady progress.

This trip was my first real experience of veterinary work in Africa and it was a real eye-opener. You see a much more dramatic caseload than in the UK, including tetanus, rabies, foreign-body colics (animals are left to graze on rubbish tips), equine RTAs and lots of wounds. It is a lesson in practicality and logistics; for example, you can't just put a dressing on a wound and send the owner away never to be seen again.

If you have any inclination to do some charity work then do it, although I'd definitely recommend getting a year of practice under your belt in the UK first so you can get the most out of it. It was a fantastic experience and while I am now doing something slightly different (a small animal internship at the RVC), I learnt a lot and I know it won't be my last visit to Africa. As a volunteer you won't change the world in a month or two, but at least it's a start.