The Veterinary Research Club – still relevant, and thriving, after 97 years

The Veterinary Research Club was formed in 1924 following a discussion between seven veterinary surgeons attending a private dinner party at the Trocodero Restaurant, Piccadilly, London. They came up with the idea of forming a club for members of the profession ‘engaged wholly in research in connection with animal diseases’. The first true meeting of the club was held at Cavalli's Restaurant in London on 15 February 1924. The founders felt that meetings should be based on a common interest in private and informal discussion of veterinary research in an atmosphere of mutual help and candid criticism, and that a significant amount of the information discussed should be unpublished data. 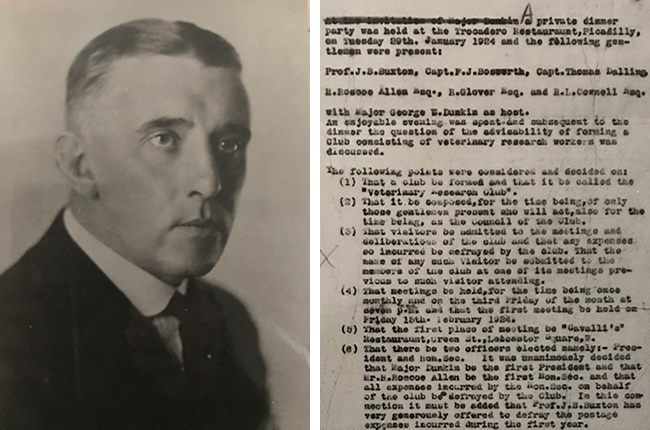 George William Dunkin, founder of the Veterinary Research Club, and an extract from the minutes of the initial meeting that led to the club's formation in 1924

Much of this philosophy has persisted to this day in spite of the many more focused scientific meetings composed of published findings or papers already in press. Open discussion is actively encouraged by rule 13 of the club which is read by the honorary secretary at the beginning of every meeting and includes the words ‘Discussion within the club is private and no report shall be published. No communication of such material, either in public or in private, shall be permitted without the prior consent of the speaker on the subject to which reference is made.’

Since it was founded, the club has met regularly, although meetings were more irregular during the Second World War. Indeed, its then president, T.J. Edwards, sent a note to all members urging them as a duty to continue attending meetings. He pointed out that veterinary surgeons were in a reserved occupation and it was vital that veterinary scientists should maintain contact with each other throughout the period of conflict.

Now, after 97 years and 460 meetings, the club continues to thrive, and remains true to its non-political origins.

A special meeting is held each year to award the Walter and Dorothy Plowright Memorial Prize for young researchers to an individual who makes a notable presentation to the club. This prize is named after Dr Walter Plowright FRS and his wife, Dorothy. Dr Plowright was head of microbiology at the Institute for Animal Health’s Compton Laboratory from 1978 to 1983 and has been widely celebrated for his work to develop a vaccine that contributed to the global eradication of rinderpest. 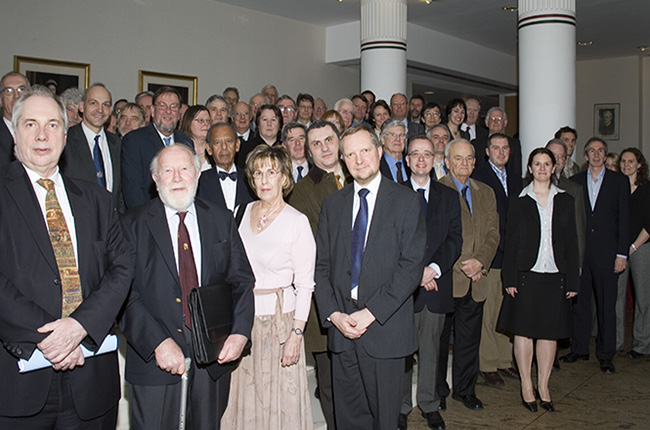 Looking back over the past year, it has certainly been a significant one for all of us in different ways and this particularly applies to many members of the Veterinary Research Club. Little could we know what was to follow our annual club dinner meeting back in February 2020, although the theme was a rather appropriate one of pandemic diseases, One Health and vaccination. In addition, the after-dinner speaker, Professor Ian Brown of the Animal and Plant Health Agency (APHA), described the key role that his agency was playing in supporting the Covid-19 testing and characterisation efforts.

During the following months, face-to-face meetings became increasingly difficult and so for the first time in its history the club held an online virtual AGM and meeting in November 2020. This proved to be a very successful event. Not surprisingly, the talks covered the investigation of SARS-CoV-2 – using an in vivo ferret model and the pig as a preclinical model to support Covid-19 vaccine development – emphasising once again the important role veterinary science plays in the fight against new and emerging diseases.

If the Covid-19 pandemic has highlighted anything, it is the close link between human and animal diseases and the key role that zoonotic diseases are likely to play in future pandemic threats. As the author Nathan Wolfe pointed out a decade ago in his book, The Viral Storm: The Dawn of a New Pandemic Age, ‘pandemics almost always begin with the transmission of an animal microbe to a human’. Without question, the current situation has reminded us all of the importance of a One Health approach to disease control since the health of the human population is so closely linked to the health of animals and the environment in which they both coexist. As a result, we should continue to recognise the important role that veterinary medicine has to play in the understanding and control of zoonotic diseases. In this regard, the link between One Health and vaccination for disease control is particularly important. Indeed, many new vaccine technologies often find their first application within veterinary medicine.

Thus, the Veterinary Research Club still has an important role to play in communicating advances in veterinary vaccine development and other control measures against zoonotic diseases. Some of our members are also involved in related discussions within a similar human medicine discussion group, the Medical Research Club, founded in 1891. The links between veterinary and human medical communities will be increasingly important in the future if we are to fully understand how human health and animal heath are interconnected, and how zoonotic diseases can develop and spread.

Therefore, in this time of heightened awareness of pandemic disease impact and the risk presented by zoonotic transfer from animals to humans and of a One Health approach to disease control, the Veterinary Research Club continues to play an important role in both networking and communication between scientists involved in veterinary disease research.

If anyone is interested in receiving further details of how they can become a member of the club, they can contact the secretary, Catrina Stirling (email: catrina.stirling@zoetis.com).