How to become a rabbit specialist 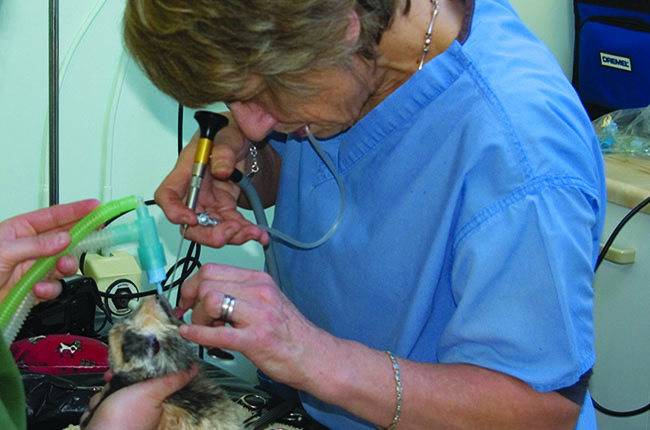 I gained a place at Liverpool in 1968, when I was 17 and lived in a remote part of the Lake District. My intention was to be a ‘proper vet’ in large animal practice. I loved my first job in a mainly dairy practice in Lancashire. At that time, I would never have envisaged becoming any type of specialist, let alone a rabbit vet. In 1974 I married Nigel, who wished to work as a zoo vet, so we had to make compromises, and ended up putting up our plate in Harrogate in 1977. I did gain some farm clients, but four children in six years and a thriving practice made large animal work unsustainable, so I concentrated on small animal work. It was Nigel's interest in dissecting any dead creature that came his way that set me on the path to becoming a rabbit specialist.

How did you develop an interest in rabbits?

I always found rabbits frustrating creatures to treat. When I qualified, all the information about them originated from rabbits kept in intensive conditions. Most diseases, including abscesses, were attributed to pasteurellosis. One day (around 1990), Nigel showed me a prepared jaw of a rabbit with a mandibular abscess. It was obvious that the abscess was due to a tooth root infection, so when the next rabbit arrived at the surgery with a swollen face, I naively believed all I needed to do was to extract the infected tooth and, like a dog with a malar abscess, the condition would be cured.

However, the surgery didn't go well. I couldn't work out what was happening with the rabbit's teeth or make any sense of the skull radiographs. There was no literature to help me, and I ended up euthanasing the rabbit and preparing its skull. I couldn't believe how awful its teeth were, and this skull triggered an obsession. I started to examine rabbits' teeth carefully during clinical examination. I took radiographs and prepared skulls as often as I could. The difference in dentition between pet rabbits and wild rabbits was so striking that I would show examples to anyone who was remotely interested. I even popped two skulls in my handbag when my children went for a dental checkup and it was the dentist who pointed out how translucent the bone was and how poorly enamelled the teeth were.

"I started to examine rabbits' teeth carefully during clinical examination. I took radiographs and prepared skulls as often as I could"

By 1995, I had gathered enough skulls to publish a paper in Veterinary Record. The publication of this paper gave me the confidence to write more, and I carried on keeping records and collecting data. I successfully applied for funding from Petsavers. My work seemed to strike a chord with the veterinary profession, and I was asked to give lectures and write articles. Rabbits started to arrive at our surgery from all over the country, and I suddenly realised I was ‘an expert’, so I obsessively read anything and everything about rabbits. This resulted in the publication of a textbook in 2002. By this time, my husband was a FRCVS and encouraged me to follow in his footsteps. I wrote my thesis on dental disease in rabbits and in 2006 I was awarded my fellowship diploma, which enabled me to become a RCVS Recognised Specialist. In 2009, I became a de facto diplomate of the newly formed European College of Zoological Medicine, again following in my husband's footsteps.

Describe some of the activities that your job involves you in.

I see first-opinion, second-opinion and referral rabbit cases and treat a variety of difficult problems, especially abscesses. I am always writing something and have been invited to give lectures in many parts of the world. Last year I lectured in Stockholm, Geneva, Tasmania and Helsinki, as well as at BSAVA congress.

I love being a vet. I know it sounds cheesy, but I enjoy making animals better. I think it is even more rewarding when it is a species that is perceived to be difficult to treat or not worth treating at all. I like having the knowledge and ability to treat rabbits successfully.

The inappropriate diet that many rabbits are fed on. Muesli mixes are not suitable for rabbits, yet these diets are heavily marketed and widely available. They are the cause of many of the diseases that rabbits suffer from. And ‘suffer’ is a good description of a rabbit with flystrike or with dental disease that has been caused by poor diet.

Why is your job important?

The veterinary profession is just waking up to the importance of rabbits as pets. The rabbits that I treat are an integral part of their owners' family, and are as emotionally valuable as a dog or cat. Improving veterinary education about the diseases that rabbits suffer from has benefits for the animal, the owners and the vet who is treating them.

To perform a postmortem examination whenever possible.

What advice would you give to someone considering a similar career?

There are two routes to becoming a rabbit specialist. The first is to find a residency that will lead to qualification as a diplomate of the European College of Zoological Medicine. These residencies are scarce and do not result in specialisation in a single species. The second is the route I took – conducting clinical research from within practice, publishing papers and gaining a fellowship diploma.

My children have given me many proud moments and it is impossible to say which was the proudest. My three (non-veterinary) daughters graduated with first-class honours degrees in their chosen subjects. Last year, my son, Tom, became a European specialist in veterinary neurology, and I was extremely proud to be his mother. It also meant there were, temporarily, three European diplomates in the same house.

One that springs to mind took place towards the end of a busy evening surgery when I was presented with a badly behaved dog with an ear problem. I testily suggested that the owner might ‘give me a hand’ to lift the dog on to the examination table only to find, when I actually looked at him, that the owner's left arm had been amputated. I was mortified. Luckily, the owner of the dog thought it was funny.