A vet working in the pharmaceutical industry 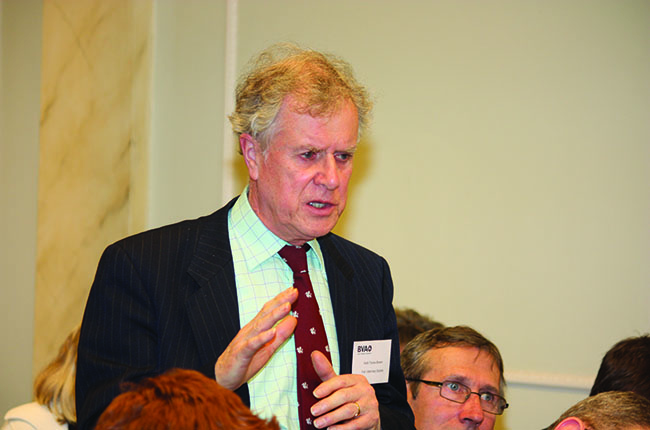 I was about 10 years old when I decided I wanted to become a vet, but it was as a student at Cambridge that I developed my vision of the profession and where I would fit in. I wanted to be involved in producing animals to feed people.

After a few months as an assistant working in large animal practice I realised that although my ambition hadn’t changed, I couldn’t spend the rest of my working life that way; I found it monotonous and dull. At the time, I was vaccinating around 120 piglets every week with crystal violet swine fever vaccine and having to castrate half of them; my hands were permanently blue. I also spent at least two mornings each week TB testing; and disbudding and castrating calves, which quickly became rather boring after the first 20 or 30.

From large animal practice to UK technical services adviser: the only vet on the team

I applied for – and got – a job with the Wellcome Foundation in London. One Friday evening, I put away my Wellington boots and my khaki lab coat and the following Monday morning entered the company’s offices wearing a suit. I was met by a young lady carrying a note pad and pencil; she said she was my secretary and seemed to expect me to start dictating pearls of veterinary wisdom. There were two other surprises in store. The first was that I had no contact with animals whatsoever and, second, that I enjoyed it.

As a UK technical services adviser, I needed to know a bit about each of the company’s veterinary products. I soon found out who the product experts were and called them frequently, at least in the first few weeks. I also discovered that the majority of the directions-for-use leaflets (the sheet of paper tucked between a bottle and its carton) had not been updated since the products were launched and were no longer in accordance with current thinking. Many were written in stilted English with little regard for whether they were to be read by shepherds, pet owners, pharmacists or vets. I completed the task of updating them shortly before the Medicines Act came into force rendering the wording immutable!

After a year or so, my boss moved on and I became the only MRCVS in an office block with several hundred people. We recruited an assistant vet and then, four years after I’d started, the company reorganised: veterinary activities were moved to the premises of a subsidiary company — Cooper McDougall and Robertson, at Berkhamsted. After the move my assistant took over my UK job and I joined the worldwide business planning team. Although it was veterinary business we were dealing with, once again I found I was the only vet on the team. The role involved a lot of travel; I made over 60 trips to 22 countries. In most cases I was visiting subsidiary companies, but I also attended congresses including four World Veterinary Congresses.

Keith at the World Veterinary Congress in Mexico

Various roles within the pharmaceutical industry

Around three years later, I found myself in a role that became the most satisfying one of my career. I became the company’s coordinator of foot-and-mouth disease (FMD) vaccine distribution. At the time, the company had four production laboratories in South America, two in continental Europe, one in east Africa and one at Pirbright, Surrey. Pirbright was the only site licensed to work with viruses not present in the country where it was situated; it was the only laboratory in the world producing FMD vaccines against the South African Territories (SAT) serotypes suitable for use in southern Africa. With the obvious exception of Pirbright, each of our production units could sell vaccine in its own country, but I became involved if they sold it elsewhere. Pirbright’s unique situation strained its production capacity and called for the careful allocation of supplies, which was my responsibility.

After two years I was moved to a different job. I was sad to move, but in retrospect, I think if I’d stayed with the FMD vaccine much longer, I would have become too specialised to do anything else. My next role was to draft complete statements of everything known about each of our products – species, indications, dose regimen, contraindications, warnings and precautions, storage conditions and so on. It was a challenge to write in simple and unambiguous language, knowing that the documents could be used anywhere in the world (and that I wouldn’t have the opportunity to check the translation).

I was made redundant when the veterinary divisions of Wellcome and ICI (Imperial Chemical Industries) were amalgamated to form Coopers Animal Health. For nearly two years I did mostly non-veterinary things — and spent some time on benefits – before I became a civil servant in what was then called the Medicines Unit (now the Veterinary Medicines Directorate). The job was remarkably similar to my final role at Wellcome; however, instead of compiling documents from data, I was checking that documents produced by applicant companies were supported by their data. One day, out of the blue, the director called me to one side and said: ‘As of today, you are our expert on medicines for fish.’ I spent three days in Scotland learning how to apply my expertise in a new and rapidly growing form of animal protein production – animals living in water.

Later, when I retired, one of my clients asked me to take over writing a book on medicines for fish. It took me about two years to collect the material and write it and it was a further two years in production. It must have been fairly successful, though, because it was reprinted after three or four years. And recently it has been translated into Chinese, where the initial print run was larger than all the English versions sold so far!

Criticism for vets in the pharmaceutical industry

I have enjoyed my career, but I did come in for some criticism for following the path I did. There seemed to be an attitude that at a time when places at veterinary schools were limited, those who had occupied such places had an obligation to do what they had been trained for – practice. Some practitioners have said to me that vets shouldn’t work in the pharmaceutical industry, but if they need technical advice about a company’s products, the first thing they say when they call is: ‘I want to speak to a vet’! I continue to see the role of the profession as promoting the production of animals as food for people and that helping those who do so is entirely justifiable.