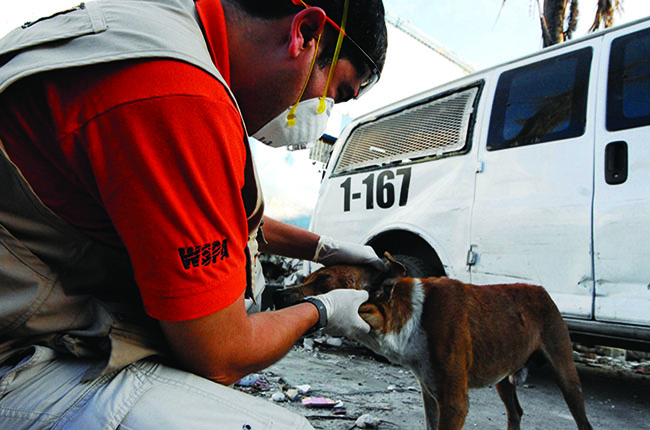 Millions of animals are affected by disasters across the world annually. As a veterinarian working in disaster response, my job takes me all over the world, often being deployed at a moment's notice to disaster zones to help animals in need.

I am based in Costa Rica, deploying from WSPA's office covering Mexico, Central America and the Caribbean, but the charity has hubs across the globe, from London to Africa and the Asia-Pacific region. My team and I provide emergency aid to animals in areas affected by wars, hurricanes, earthquakes and tsunamis.

When disaster strikes and we receive the all clear for deployment from WSPA's headquarters in London, we travel to the area as quickly as possible to help animals with everything from urgent injuries to vaccinating them against zoonotic diseases. Depending on the scale of the disaster, we may join forces with our global team members, as we did for the 2010 earthquake in Haiti. Most recently, my team was deployed to the Philippines to help our colleagues deal with animals affected by Typhoon Haiyan.

"My job takes me all over the world, often being deployed at a moment's notice to disaster zones to help animals in need"

As each disaster is different, it's hard to know what to expect, but we need to think fast and respond quickly to what we find. We work to a master response plan but, when debriefing on the day's activities, we often find that we need to change our approach and the operations director may decide to quickly turn things around.

In the field, we provide initial emergency treatment, access to food and water and training in animal handling and restraint. In some cases we build shelters to prevent animal fatalities in future disasters. When we help these animals, we are also helping the families who depend on them. Bringing hope to them is where I get the biggest sense of reward; although they may not understand the finer detail of our work, people's smiles show how much difference we've made through helping their animals.

Experience from the Philippines

When Typhoon Haiyan tore across the Philippines in November 2013 it caused widespread devastation, leaving 4 million people homeless and killing between 4 and 5 million animals. Our team of disaster staff from across the world arrived 4 days later. We started by providing immediate treatment to animals that had been hurt. Another task was to identify areas that required vaccination campaigns. Ensuring that animals are protected from disease is a crucial part of emergency response. This is vital for ensuring animal health and productivity as well as safeguarding people.

After the animals' immediate needs had been met we began thinking longer term. We ran emergency management workshops at the Aklan State University and the provincial veterinary offices of Aklan and Antique.

We also shared ideas on how to protect animals in the event of another disaster: the Philippines are regularly hit by typhoons, so it's crucial people know how to protect their animals in an emergency. Construction of typhoon-proof animal shelters was something we learned from events in Cuba; we decided to adopt similar ideas using local materials. The new building used a combination of underground housing and buildings with removable roofing. This, we believe, is the first typhoon-proof farm and time will tell if the design is successful.

In the Philippines there is a strong bond between animals and people, many of whom completely depend on their animals for their income. It is those in poverty who are the most severely affected by typhoons; many families stand to lose absolutely everything if their animals are not rescued.

On this occasion, our campaign helped more than 17,500 animals across three of the affected Visayan islands – Cebu, Panay and Leyte.

I want to have a positive impact on the lives of animals all over the world and this goes beyond veterinary care alone. My role puts me in the fortunate position of being able to teach people how important it is to protect animals. In the Philippines, for example, we trained a new generation of emergency vets in stress-free movement of animals. They were our pioneers and we hope they will pass on what they have learned.

In some parts of the world people don't think animals are sentient beings but as vets we must combat this and help people to understand animals' needs. Ultimately, our aim is to get people to treat animals well; they're so important. Even a disaster can have a positive outcome – by creating the opportunity for us to improve animal welfare.