Unable to find a pet food to recommend, I set up a business to make one 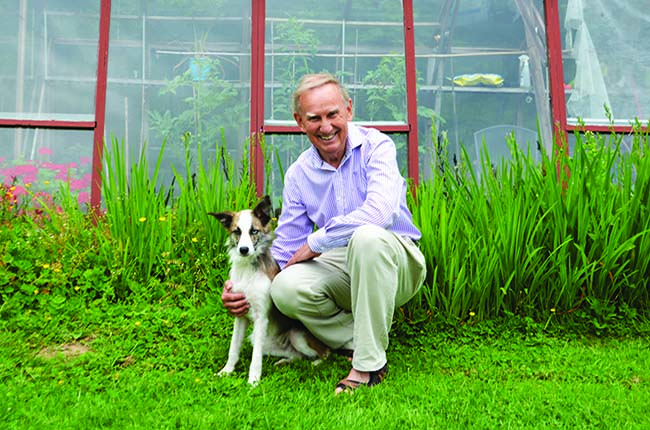 In my teens I worked on a small dairy farm during holidays and at weekends in Scotland. It was next door to Lochfield Farm where Sir Alexander Fleming of penicillin fame was born. This link to science and my enjoyment of working with animals led me to choose to do a veterinary degree.

I qualified from Glasgow, without a career plan. I saw practice in East Anglia and decided to work there, but in the end I took the first job I was offered. It was in Whitland in rural Carmarthenshire. It was just like the west of Scotland – only the rain was warmer! I planned to stay for a year. Forty-six years later, I’m still here in Wales.

The practice was almost 100% large animal, predominantly dairy; it was really hard work and I learned a lot in a short time.

In those days, small animals were seen as a rare inconvenience. I found that when I encountered an itchy dog or one with bad ears, I would treat it using drugs but when the medicine finished, the problem came back. This wasn’t quite what I had been expecting in my professional life.

I was particularly impressed by a Japanese/American philosophy called macrobiotics. This movement aims to unite traditional thinking with our modern lifestyle. The view was that man’s evolution and development were built on the use of whole cereal grains and vegetables as principal foods, with pulses and fruits as secondary foods. Animal-derived foods were consumed only in very small amounts. The macrobiotic view is that we have abandoned our traditional way of eating in favour of a diet high in meat, dairy foods, refined foods – especially sugar and chemicalised food – which has led to the many ills of modern society.

Back in Wales in 1978 in my own veterinary practice in Llanelli, I decided to adapt this philosophy of human nutrition in my practice. I used drugs as a short-term fix, but to prevent recurrence I would advise a change in diet. My advice to clients was to avoid commercial pet food and instead to feed a home-cooked diet of brown rice, vegetables and meat.

"The macrobiotic view is that we have abandoned our traditional way of eating in favour of a diet high in meat, dairy foods, refined foods"

This approach led to fantastic improvements in the health of dogs (and cats). Chronic problems, especially affecting the skin, ears and digestive system cleared up, never to return.

But there were problems. Most pet owners didn’t believe or want to believe in a dietary approach, and many didn’t have the time or inclination to cook for their pet. I had seen enough to convince me that food could manage health problems. But there wasn’t a commercial pet food I could recommend.

I gradually came to the view that if pets were to be fed in the way I thought they should be, the food would have to be available in a convenient form. This was probably the biggest challenge of my life. Throughout the 1980s and early 1990s I put a great deal of time and effort into how to produce food commercially. It took 15 years to develop a commercial pet food.

Eventually, I found a manufacturer in Carmarthenshire that was willing to make a food according to my ideas. This was how Burns Pet Nutrition began in July 1993.

The Burns Pet Nutrition Foundation undertakes a number of activities. ‘Burns By Your Side’ is a project that introduces volunteers and their dogs into schools so that children can read to the dog. This is enormously beneficial to children who are reluctant readers or who lack confidence in communication. We now have over 60 volunteers going into schools in west Wales.

We also have a farm shop in Kidwelly. Parc Y Bocs Farm Shop is for families and has a garden and playground, a café and restaurant.

It is used for our Better Tomorrow scheme where disadvantaged people can undertake supervised projects, among other things.

My hope is that our investment in community activities will raise the company’s profile and recognition through this work. The work of the Foundation has only just begun and there is still much to be done.

I started to take more interest in business management. Learning about customer service was a real eye-opener, and I recommend it to anyone involved in a service industry.

"I gradually came to the view that if pets were to be fed in the way I thought they should be, the food would have to be available in a convenient form"

An early concern was whether a commercial kibble food would give the same health benefits as home cooking? I needn’t have worried. If anything, the results were even better. I suspect this was because the factory-made food was produced more consistently.

In 1978, using nutrition as the key to optimal health was seen as weird. Now, of course, it’s much more mainstream. However, like doctors, vets are in favour of a good diet, but without being sufficiently knowledgeable about what that means.

My specialist knowledge comes from amalgamating veterinary science and traditional medicine/philosophy, especially its role in holistic health. Many pet owners stumble from food to food in search of a solution to chronic health problems and don’t seek professional advice.

Like many of my generation, I have devoted myself to work and haven’t developed consuming outside interests. I like reading, cycling on my e-bike and (watching) football, but I am fortunate to enjoy working in the business. The company also has a community charity – the Burns Pet Nutrition Foundation – which is of huge satisfaction to me and is better than any hobby.

I am pleased I chose a veterinary career, although a career as an ecologist or in forestry would also have appealed to me.

As it happens, I now own nearly 200 acres of woodland, which is used for nature conservation and community projects for disadvantaged people, as well as being a source of timber.

I am proud to have established a highly respected and innovative business that guarantees to pay a living wage to all our employees. Apart from pioneering a new approach to holistic pet health, the company has helped to regenerate economic and social activity in the area. Recognition came recently in the presentation of a Lifetime Achievement Award from Swansea Bay Business Club.

Along the way, I have developed a range of skills, from acupuncture to business management (self taught), and gained expertise in holistic health through nutrition. I like writing, but I find it very difficult. I also enjoy talking to and advising pet owners. My pet hate is sitting in meetings.

Have I got where I want to? No. Far too many pets suffer unnecessarily from poor nutrition and it is my long-held dream that every pet should have a natural, wholesome diet. As a business owner, I always want to see the business grow and that feeling doesn’t go away easily.

What of the future?

The pet food industry is becoming much more difficult, as is commerce in general. Independent pet stores are closing as the High Street is being fragmented.

Once a fortnight or so I receive an enquiry about selling the business. Private equity investors are on the look-out for desirable companies that can be slimmed down to increase profit and then be sold on.

My intention is that the business will remain in local hands to provide benefits for everyone involved – from pet owners and employees to the community at large.