A turtle-lly amazing experience in Cyprus 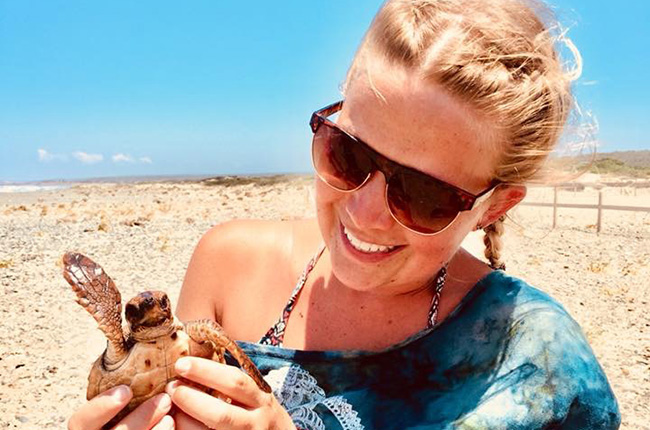 My interest in exotic species began with my own pet tortoises. Wanting to learn more led me to embark on a City and Guilds certificate in veterinary nursing of exotic species, which I passed with distinction.

During the course, I heard about the opportunity to volunteer with a turtle conservation charity in Cyprus and applied immediately. Before long, I had arranged to spend two months away from my job as head vet nurse at Kingfisher Vets in Somerset, to go to help protect green and loggerhead turtles in Cyprus.

I met up with two other volunteers at the airport and we arrived at the camp late at night. When I discovered that our washing facilities were outdoor showers supplied by well water (which was very cold), I nearly booked the next flight home. However, after a long day travelling, I braved the shower before retiring to our sleeping quarters where we slept on foam mattresses that were lined up on the floor. I was glad I had packed decent bedding and a mosquito net!

Despite my reservations, we soon got into the swing of our roles.

Volunteers do an equal mix of day and night work. Day duties mean an early start – often 5 am – and a typical shift might be as short as four hours or as long as until nightfall. Night work starts at around 8 pm and ends around 6 am. The main study beaches at Alagadi are patrolled every 10 minutes throughout the night, from late May through to mid-September.

We walked miles of beach searching for sets of tracks and would then follow them to locate the egg chambers. When we encountered a female turtle, we observed her – recording whether she was nesting, attempting to nest or retreating to the sea. We measured her carapace length and width and recorded the pattern and number of scutes on the shell. She was also checked for or fitted with identification tags, or a satellite transmitter. Her nesting behaviour was observed and the number of body pits and egg chambers she attempted to dig was recorded. 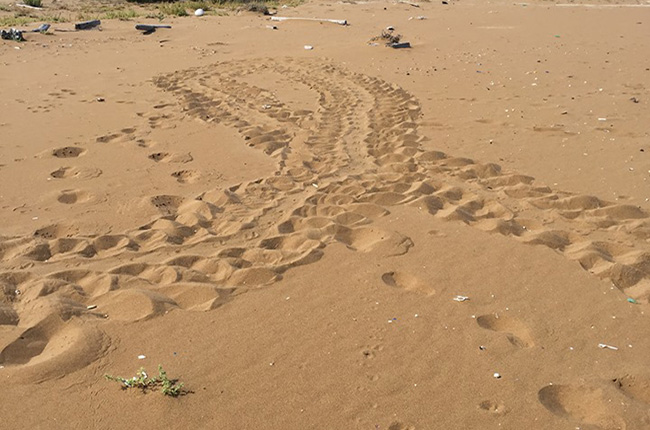 We walked miles of beach searching for sets of tracks

During the egg laying process, we placed a temperature logging device into the nest and a flat mesh cage on the top. This helps to protect against predation by dogs and foxes, which habitually dig down to the nests when they encounter them. Lastly, a domed cage was placed on the top to warn visitors who were using the beach. Each cage was given a number and labelled with the date and breed of turtle. From mid-July to the end of September, volunteers check the nests every night to ensure they haven’t been predated. As the hatchlings emerge, a sample of them are measured and weighed before being released.

As the hatchlings emerge, a sample of them are measured and weighed before being released

Among the facilities we had access to was a laboratory where postmortem examinations were carried out. These were smelly but they provided a fascinating opportunity. It appeared that most turtles had died as a result of the fishing industry.

I got lots of practice microchipping and tagging animals that were a lot stronger and a lot more ‘flappy’ than my regular patients. It’s impossible to restrain a turtle, you just have to wait for a momentary break in its flapping and then be quick and efficient.

Vet nurses in practice are used to teamwork and my experience in Cyprus mirrored this. We were a small team with a lot to do, so organisation, communication and everyone pulling their weight were paramount.

As I got used to life at the camp I learnt, for example, that it was worth waiting until late afternoon for a shower, as the water had had a chance to warm up by then. During peak season the camp was busy, with up to 30 volunteers at any one time. Two smaller ‘branch’ camps were located elsewhere on the island, so we rotated around and got to experience each one.

The camps had a nice community feel, especially in the evening when everyone ate together. Chores were organised on a rota basis, although people often swapped duties. For someone like me who likes cooking, this was a chance to do something I enjoyed. Food was vegetarian and basic, and working out how to produce a different and exciting meal for so many people each night using the same ingredients – pasta, rice, vegetables and tinned tomatoes – stretched my culinary expertise somewhat.

If you are interested in volunteering, you can find out more information at http://cyprusturtles.org/home/volunteering

Of course, there are many volunteering opportunities and I would recommend joining an organisation such as the Worldwide Veterinary Service, which regularly updates the trips that are available.

In order to narrow your search, it can be useful to decide what’s most important to you – the location, the work you’ll be doing, or the species you’ll be working with. You also need to consider things such as your budget and the time you’ll be able to commit.

If you want to take an extended break from work, it’s a good idea to speak to your employer as soon as possible. I started casually mentioning my ambition a couple of years before I actually went, so it was on the practice radar. This was an opportunity to explore my options as regards leave and pay. In my case, I managed to take a month’s holiday in one block and another month as unpaid leave.

I had an amazing, once-in-a-lifetime experience at the turtle conservation programme and met a wonderful group of people. It also opened my eyes to the problems of plastic pollution and fishing and their effect on marine life.