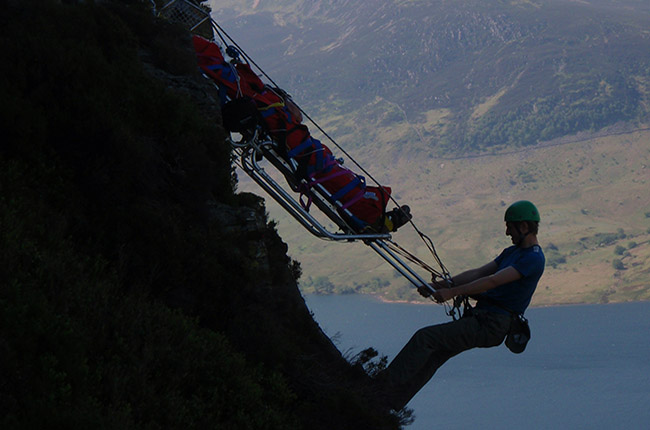 What made you join the Tweed Valley Mountain Rescue Team?

I came to the Scottish Borders after graduating in 2007 and, like many new graduates, I was moving to an area where I had no social network. After spending the first year in practice finding my feet, I was starting to look for something to be involved in outside of work. I became involved with the local Mountain Rescue (MR) team after spending a day on duty with them at a local common riding (a historic annual festival peculiar to the Borders, where a large mounted cavalcade rides the town's boundaries). I was providing vet cover and they were providing first aid for the riders. I have always spent a lot of my free time in the hills and, after speaking to them, it seemed that joining the team would tick a lot of boxes for what I was looking for, so I applied.

Tell us a bit about MR

MR across the UK is a voluntary service. Our team is one of the 31 teams that are affiliated to Scottish Mountain Rescue, our national representative body. We are based in Selkirk in the Scottish Borders and cover West- and Midlothian (including the City of Edinburgh) and the western half of the Borders. This includes the Moorfoot and Tweedsmuir hills as well as the Pentland and the Edinburgh hills. There are 40 members in the team plus four trained search dogs, whose handlers undertake additional training with the Search and Rescue Dog Association, and we are on-call 24/7. I will not always be able to attend incidents if they come in through in the day when I am at work or when I am on-call at weekends, but this is no different from many members of the team. We take the view that the size of the team allows us to turn out whenever it's required. We average around 25 call-outs a year, but it's unpredictable. We can go months without a call-out, yet we have twice had three call-outs in one day since I have been on the team.

The type of incidents are hugely diverse and certainly much more so than the public's perception of MR. We get called to the classic hill incidents such as mountain bike accidents and overdue hillwalkers. Increasingly, we are asked to assist the police with missing person searches in rural and semi-urban environments. This might be an elderly lady with dementia who has walked out of a care home, or missing children, but frequently it will be for a despondent adult and, sadly, self-harm is a common factor in these searches. We have also responded to remote aircraft crashes, people trapped in old mine workings and civil contingency work during severe weather events. In the past, the team has been involved in animal rescues, but I am still waiting to wear both of my hats on a job.

Are any of your veterinary skills transferable to MR?

When I joined the team I thought that being a vet would be an advantage in terms of the medical aspects of MR. Aside from understanding the medical terminology, I was surprised at how little of what I do as a vet translates across to the MR field. To an extent this also applies to the doctors in the team, who are much more familiar working in a hospital environment than with the limitations of being in the field and, in many ways, the experience of the paramedics in the team is much more relevant. Perhaps the thing I find most difficult is having to talk to the casualty constantly to reassure them and make them aware of what is happening – not something we do with our four-legged patients.

How are rescue teams funded?

MR teams are almost entirely self-funded and fundraising is a big challenge. In Scotland, we are lucky to receive a grant from the Scottish Government, although this amounts to only about a third of the annual running costs of our team. The majority of the team's income comes from direct fundraising activities by team members, particularly by providing first aid cover at outdoor events. This requires a massive time commitment from our members on top of training and call-outs and we make clear to anyone who is thinking of joining the team that we expect them to take part in fundraising.

Ironically, I probably spend less time enjoying myself in the hills now than I did before joining the team. Between being on-call for work and especially now with the commitments of a young family, it means ‘free’ weekends are few and far between, and it can be frustrating having to devote these to team business, such as meetings and first aid cover, when I'd rather be out playing.

Why is MR important?

MR teams provide a service that the statutory emergency services are not able to deliver. That this is provided entirely by volunteers, in a non-judgemental manner, and is free of charge to those in need, is exceptional.

This was given to me by my father, who is also a vet, and applies equally to the MR world as it does to the veterinary one. It is to never rush when you first arrive at a high-pressure incident. As the professional, people will look to you to take charge and your attitude will have a huge influence on the overall mood of the situation. Keeping a calm and efficient exterior is enormously reassuring to others caught up in a traumatic incident, no matter how hard the adrenaline is pumping inside.

It would be easy to say becoming team leader, but actually I am most proud whenever we are dealing with a live incident and I'm a small part of a greater team effort, whatever that role is. We train hard and long but it is such a great feeling to be part of a team where everyone knows what needs to be done and is working together in the best interest of the casualty.

Taking a wrong turn while driving the team Land Rover off a hill and getting it well and truly stuck, but my co-conspirators and I have been able to keep this a secret from the rest of the team thus far …