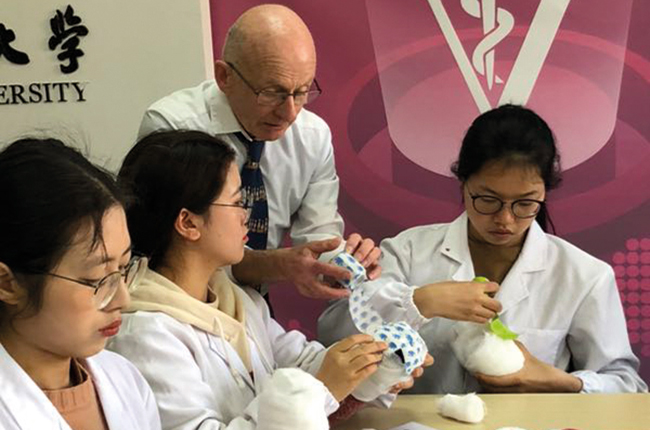 My first trip to China in 2014 came about thanks to a British Small Animal Veterinary Association travel scholarship. I used the scholarship to visit Zhejiang University in Hangzhou to learn about the use of acupuncture and herbal medicine in animals.

During the trip, I discovered that veterinary training involved the students using live dogs, cats and ruminants to practise invasive procedures. I realised that if I could persuade the university to let me run clinical skills workshops using models or manikins instead of animals, I could have a strong influence on animal welfare. In China, contacts are very important, so I enlisted the university’s help, hoping that adopting the idea of using Western methods of teaching would catch on more widely when people saw how effective they could be.

When I returned to the UK, I set up a ‘Just Giving’ appeal for funding. The story was covered by a local newspaper and I raised enough to allow me to return to China with a selection of homemade models, a lesson plan and a USB stick containing photographs and videos of basic veterinary procedures taken at the UK hospital where I work. The only limitations to what I could teach were my ability to make suitable models and fit them in my suitcase, and funding.

My hospital had kindly donated out-of-date suture material and giving set tubes, which I initially used for venepuncture practice.

I explained to the university that class sizes should be a maximum of 10 students, which would allow each one to have a go at trying basic practical procedures with my help. The vet school – where classes are huge – did not understand this concept.

I spent a fairly stressful weekend finding a suitable teaching venue and trying to get hold of the basic equipment that I had been promised – but which didn’t materialise – to start the training on the Monday.

'The only limitations to what I could teach were my ability to make suitable models and fit them in my suitcase, and funding'

Summers in Hangzhou are extremely hot and the room didn’t have air conditioning. My group of 11 students were cramped around one large table. Nevertheless, I covered intravenous access, bandaging, fine needle aspiration and suturing. I had also prepared a talk with photographs about how good kennelling benefited animals and vet staff. I repeated the four-hour class daily for five days.

I demonstrated techniques using my basic models, showing photographs and short videos. Next, the students had a go themselves – it seemed to work well. Translation was seldom necessary as most university students in China can speak a little English, and I mainly relied on demonstrations. I also speak a little Chinese.

The sessions grew in popularity – I had to turn students away from the last one, because the demand had become so great.

As a result, the dean was keen for me to return the following year. A dinner was held in my honour and I was assured that a proper classroom on campus and funding would be available when I returned. At the time, I hadn’t really considered future trips and I knew that promised funding often does not actually materialise.

I also realised that having access to better models would help me improve what I could teach and make the sessions more time efficient – I had learned the importance of organisation and classroom set up – but funding was definitely going to be a problem.

One of my intubation models, home made from a rubber hand puppet bought online –
light and compact and costs around £12 to make. I fit a small piece
of wood across the inside of the head to which wires are attached.
These support a hard ball, drilled with a hole for the tube
(replicating the way the hyoid apparatus suspends the tongue and the larynx).
A small cardboard tub – painted red inside – means the students see a red throat.
The pieces fit inside a plastic food container that doubles up as a stand

As expected, the funding did not materialise, but I had some money left over from my original fundraising effort and I decided to pay the rest myself. I explained that I would be happy to stay in the halls of residence (it was free and convenient, which saved me paying for a hotel).

On this occasion, I was provided with a conference room in the small animal hospital. It was still cramped, but the air conditioning was definitely a bonus.

Having returned to China every year between 2014 and 2019, I now teach clinical skills at three veterinary universities. My classes have expanded to include endotracheal tube placement, injection techniques and removal of multirooted teeth.

In 2020, I was expecting to teach at seven universities, but Covid-19 was a major blow. Among many other barriers, visas were temporarily suspended and travel was impossible.

Apart from being able to improve animal welfare, having the opportunity to visit new places is interesting, although travelling on high-speed trains can be nerve-wracking. At the stations, few people speak English and when trains arrive there is a rush of people wanting to board. China is a huge country and it would be easy to travel hundreds of miles before a ticket collector spotted an error.

Arriving at a new university is an anxious time too, as facilities and organisations vary – making running classes fairly easy or very difficult.

Over the years, I have managed my own funding: for example, I worked in Hong Kong for a year, travelling regularly to China to teach. The following year I locumed again in Hong Kong – on a working holiday – and travelled to China before returning home. Latterly, I have received payment from some universities, and sometimes my airfare is covered.

There’s no doubt that veterinary education in China is improving. Seven years ago, my experience was that it was woefully inadequate, possibly because being a vet was seen as a low-status job. Back then, students completed a four-year animal science degree and those wanting to become vets would also spend a year working at an animal hospital as a vet nurse equivalent (there is no vet nursing qualification), and then take an exam.

Last year, the animal science course in China was increased to five years. I hope that when I manage to return, I will see major changes – perhaps they may even have adopted the Western ways of teaching clinical skills!