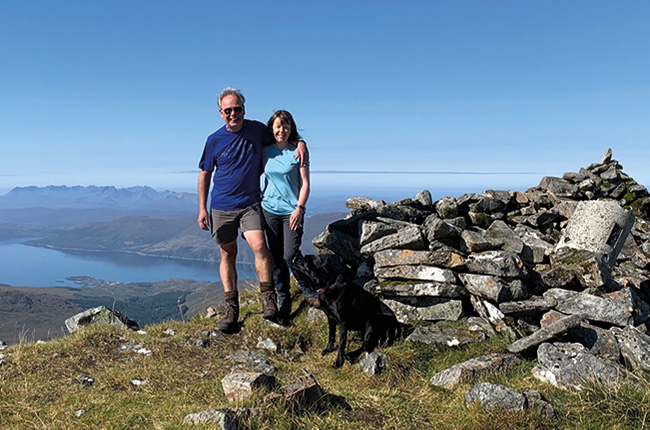 French and German were my best subjects at school and I went on to take two language-based degrees, which landed me my first translation job at the Foreign Office in London. Later employers included the Dutch multinational Philips in Eindhoven.

But the crucial move was to the Ministry of Agriculture, Fisheries and Food in London in the early 1990s, sowing the seeds for a focus on veterinary translation. The work here centred around the Common Agricultural Policy, EU regulations and animal import/export certificates. I turned freelance when my husband – a vet – joined an Aberdeenshire veterinary practice as a junior partner, taking us to Scotland.

On our engagement, Ian had half-jokingly gifted me a book called Wife to the Vet, a Herriot-style autobiography that only fuelled my fears about playing second fiddle to his career. So at first I worked as a generalist and gave veterinary translation a wide berth. But soon I decided to turn things to my advantage by specialising in veterinary medicine. After all, I had a personal expert on hand and our family has always kept pets – from gerbils to goats and horses. Learning by osmosis through Ian was a good start, but I deepened my subject knowledge by shifting my CPD hours towards veterinary journals, webinars and MOOCs (massive online open courses).

Key areas of my work in veterinary translation are research, clinical trials and pharmaceuticals. Much of this has overlaps with human medicine; for example, techniques, diagnostic tests, summaries of product characteristics, package inserts. Then there is animal health and nutrition, which includes hygiene and cleaning products, dietary supplements, livestock feed and pet food. And the global pet care industry generates vast amounts of product information and advice for pet owners.

Some texts call for deeper veterinary or farming knowledge: scientific papers or journal articles, animal surgery, anatomy and pathology, epizootics and zoonoses. In niche subfields such as apiculture or equestrianism, prior subject knowledge is vital in order to avoid spending long hours on research (as I found out with a catalogue of equestrian products, believing I already knew about horse tack).

Translation holds plenty of pitfalls for the unwary. A ‘chat Européen mâle castré adopté à l’âge de deux mois’ (literally a ‘castrated male European cat adopted at the age of two months’) might become a ‘neutered male domestic cat living with his owners since he was two months old’.

A classic mistake is to use terms from human medicine, which can be inappropriate, incorrect or even unintentionally funny. As a reviser of translations, I’ve seen ‘mother’ for ‘dam’, and ‘father’ for ‘sire’ – fine in some contexts but less so in bovine genetics. ‘Maternity ward’ for ‘farrowing unit’ raised a smile. Yes, cows can ‘get pregnant’ or even ‘conceive’ but readers might be more likely to say ‘get in calf’. Cats have ‘dander’ rather than ‘dandruff’. And, in one of my favourite clangers, mice certainly don’t produce ‘turds’.

Some translators forget that species-specific terms are an option; English is rich in these. A generic ‘birth’ can be rendered as ‘lambing, foaling, calving, whelping, kittening’, and so on. Or even as ‘hatching’, because of course vets don’t just deal with mammals.

'A classic mistake is to use terms from human medicine, which can be inappropriate, incorrect or funny'

Importantly, there’s the readership to consider – vets, research scientists, farmers, pet owners, and so on. Are they in the UK, the USA or international? Ideally a translator knows the purpose and target group of the translation and tailors it accordingly. A ‘uterine prolapse’ to a vet might be a ‘cow with her calf bed out’ to a farmer. ‘Diarrhoea’ might be ‘scours’. Terms such as ‘gimmer’, ‘hog’ or ‘tup’ are pretty mystifying to non-farmers, plus some words don’t travel: ‘hefted’ (of sheep) may baffle an international readership.

Vets and scientists will be familiar with Latin terms, but other readers might need these to be translated too. An on-the-ball translator can also add value by highlighting source errors or adjusting for cultural differences.

Language resources specific to veterinary medicine are scarce, although I do have a couple of well-thumbed specialised dictionaries. Random glossaries exist online, and there are websites such as the Food and Agriculture Organization, IATE (Interactive Terminology for Europe, the EU’s terminology database) or the European Medicines Agency. The websites of government agencies (Defra, the National Office of Animal Health and the Veterinary Medicines Directorate) or foreign equivalents can be useful too. Keen translators data mine the websites of pharmaceutical companies or feed manufacturers for technical terms and information. In practice, it’s essential to compile your own glossaries over the years. Machine translation is often not an option either (see below). 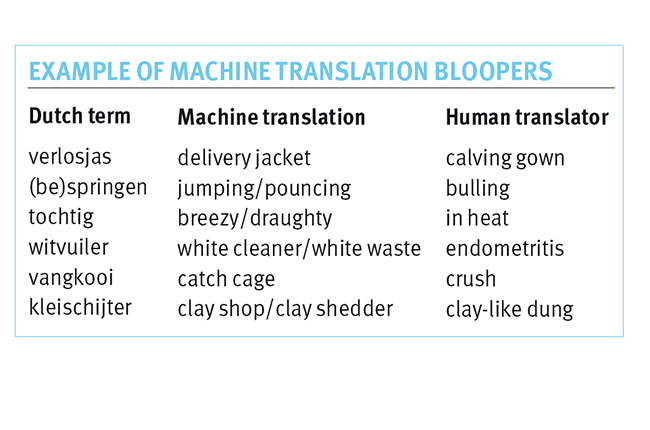 Working as a team

My major advantage is my own in-house expert: I’ve picked Ian’s brains and borrowed from his practice library. Ian has consulted on book translations and been credited several times as a content editor. And his expertise often beats Google: faced with the German ‘metallstäbchen mit seitlichen holzkugeln’ (little metal stick[s] with lateral wooden balls) and minimal context, Ian not only identified it as a ball-ended prolapse pin, but also produced one to show me. A trip to the Paris Salon de l’Agriculture trade show combined business and pleasure for both of us.

Certain topics are challenging because they raise ethical dilemmas or call for a strong stomach. In animal testing I often translate protocols for handling and killing laboratory animals, and comparisons of euthanasia methods – some less humane than others. Livestock production offers plenty of work too, but some translators are put off by the realities of farming. Topics I have handled here include beak trimming in chickens, disbudding of calves, tail docking, castration, abattoir procedures and instructions for the use of a captive bolt gun.

People often say that veterinary translation sounds a bit niche, but it holds endless variety and no shortage of work, certainly for translators with in-demand language pairs.

My own career highlights include a recurring equestrian calendar, a book on sheep and goat diseases, and the fascinating proceedings of an equine dentistry conference. From this I learned about the illicit practice of ‘bishoping’ (‘gitschen’ or ‘mallauchen’ in German) – using chisels and hot pokers to de-age a horse’s teeth by recreating the cusps and ridges that denote youth.

'Veterinary translation holds endless variety and no shortage of work'

What makes a veterinary translator?

So what makes a translator? Knowing two languages isn’t enough; that’s like saying anyone with two hands can be a concert pianist. First you need a full command of your target language, in my case English. Second, a firm grasp of your source language(s). By the way, unless perfectly bilingual, professionals only translate in one direction. Third, detailed subject knowledge. Fourth, ideally a professional qualification with a body such as the Institute of Translation and Interpreting.

Translation is an unregulated profession but such memberships are a mark of quality and seriousness, which is also useful to know if looking for a translator.

Chef du Monde is an animal health translation agency based in Barcelona, Spain. It has a rigorous testing and application procedure and novices might find the larger non-specialised agencies to be a better route into the field.

The elephant in the room

You might be thinking, surely nowadays anyone with internet access can translate? Yes, to some extent, and the algorithms are improving all the time. I use Google Translate myself when I get emails in languages I don’t know. It’s good for basic communication or for getting the gist of something. But I’d suggest using it with caution, and definitely not on anything for publication!