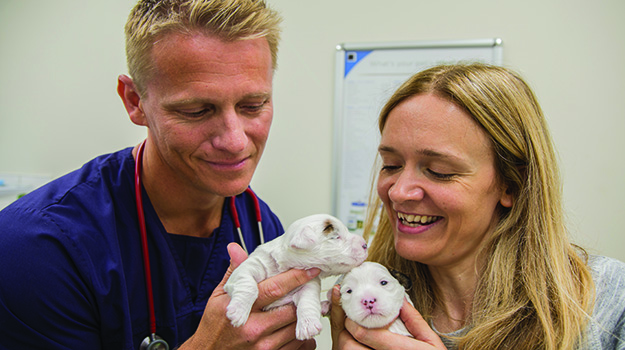 It was a close encounter with wildlife during a camping trip in the Outback that inspired me to become a vet – I was seven years old at the time.

After qualifying from the University of Queensland veterinary school in Brisbane, my first job was with RSPCA Australia in Sydney. It was exciting, but a bit frightening to discover that a series of Animal Hospital was being filmed there.

Being newly graduated is a challenging time, juggling so much information in our heads, while surrounded by staff who are either more qualified or more experienced. So, having a TV camera thrust in my face at this stage of my career made me feel pretty exposed, but I enjoyed the challenge and appreciated the opportunity to advocate animal care and welfare to a wider audience.

Moving to the UK

At the end of my first year at work, I decided to move to the UK. My parents are British, so I had a UK passport. After such a long time studying, the thought of being able to work and travel was incredibly appealing.

I began as a locum, but soon settled into my first permanent job at a small branch practice in Mile End, East London, which was quite different from a leafy suburb of Brisbane.

Little did I know, life was about to change.

Vet career in the media

The practice received a cryptic phone call about some sick chickens. After a bit of deduction we worked out it had been made by the producers of Big Brother: it was the first series in 2001, when the show was filmed in Bow Studios. I was asked to attend to the chickens, which I did … and the rest is history.

Some of my proudest moments have been televised, including delivering a live puppy after a long and difficult natural birth, as well as giving CPR to a chipmunk that had a heart attack, and performing surgery on a conscious chicken.

"I was asked to attend to the Big Brother chickens, which I did … and the rest is history"

Nowadays, I balance being on television with being a father, a practice owner and an author. It can be tough.

As a vet, working long hours and suffering emotional exhaustion can be quite antisocial, which is not particularly kind to our nearest and dearest. When you add the demands of media work and owning three practices, I don’t always get the balance right. Having said that, I have a fantastic practice manager and my family is incredibly supportive of my television work. The kids love seeing daddy on TV, and that makes it all worthwhile.

Advice to other vets

Get experience and become comfortable in your own skin and skills, while also accepting the fact that you don’t know everything – it’s impossible to be a specialist in everything!

We have an incredibly taxing job, both mentally and physically. Smile more and give yourself a break and accept that every day will be a ‘school day’.

Get to know your clients:

It’s far easier to gain trust and initiate treatment plans when your client knows and likes you. I think it helps when our clients feel you genuinely enjoy working with their animals.

Accept there will be embarrassing moments:

I have had many, including the time I joined a dog patient for a hydrotherapy session. As I disrobed, the client made some cheeky comments that were televised to the nation – my vet mates teased me mercilessly.

And, finally, look forward to a long future in our wonderful profession.