The moment I made up my mind to be a vet is still a vivid memory. I was walking with my parents and our dog, Brandy, when he damaged his leg on some broken glass. It caused an arterial bleed and tendon damage. Watching the veterinary team save his life inspired me – I wanted to be able to do the same.

Daunted by the competition for a place at vet school, my back-up plan was to study animal behaviour and welfare. Luckily, though, I got a place at the Royal Veterinary College.

Physical disabilities and working in practice

My aim was to work in mixed practice for a couple of years and then move into small animal practice.

I had set myself a two-year limit because I have physical disabilities and I knew my body wouldn’t cope with doing more than that.

Several events affected my health during vet school and by third year I knew mixed practice was going to be out of the question. By final year I was struggling with the physical aspects of vet school, more so than I let on.

At the time, I saw myself as a general practitioner in small animal practice and hoped that I would own my own practice one day.

However, during final-year rotations I was surprised to find that I really enjoyed anaesthesia and even considered becoming a board-registered veterinary anaesthetist.

Options outside of practice

Veterinary practice was a struggle. My physical health problems meant that I was tired constantly.

Two years in, I knew clinical work wasn’t going to be a viable long-term career, but I kept pushing myself. I was scared to tell people that maybe practice wasn’t right for me.

It was time to rethink my options. I considered going into research and doing a PhD. My areas of interest were anaesthesia and animal welfare, but I wasn’t sure which direction to take.

I was increasingly frustrated by owners telling me their animals weren’t in pain when it was obvious they were. Few practices seemed to pain score dogs, let alone cats, and there was no validated pain scale for rabbits. In the middle of a rabbit consultation, I had a light bulb moment – I could study pain in rabbits. 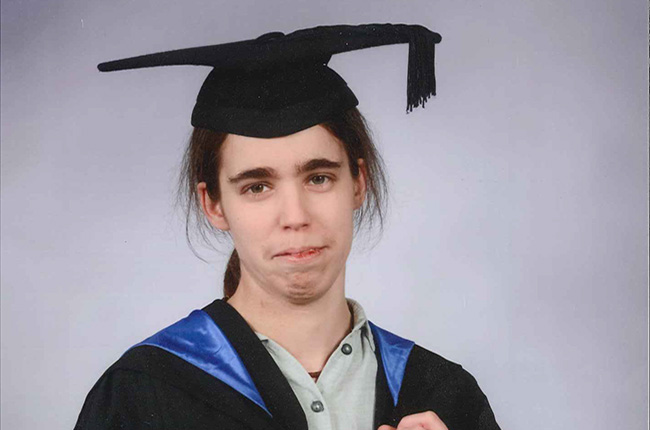 I arranged a four-week placement at Newcastle University, which basically involved filming rabbits that had undergone anaesthesia using two different levels of analgesia alongside rabbits in a control group.

Although it was tedious at times, it involved the practical skills and knowledge I’d used as a vet and was far less physical.

Animal behaviour and welfare at University

My research placement led me to enrol on a masters degree in applied animal behaviour and welfare, similar to the course I had applied for when I was 18.

As the only vet on the course I became the person my peers would turn to when they wanted veterinary advice. And the footage I’d filmed the previous summer turned into the basis for my dissertation, using the rabbit grimace scale (a pain scale) to detect post-castration pain in rabbits.

My interest in behaviour and animal welfare was developed through my masters and I have gained a huge amount of knowledge about the interrelationship between welfare, behaviour and veterinary problems.

With my new knowledge, I have started along a different career path, one involving animal welfare and behaviour.

I provide animal behaviour, welfare, care and health advice to the general public and the animal and veterinary industries through a website I set up.

"I may not be doing clinical work, but I’m still a vet"

As such, I work with individual clients who want support in caring for their pets or those who want advice on the best animal or breed for their lifestyle.

I am building connections with local animal rescue centres, helping them with the animals in their care and ensuring that new owners can get support if they want it.

My role allows me to fit work around other commitments and makes life more enjoyable. However, it hasn’t been an easy decision, because I’m not business-minded.

I’m also considering creating a social enterprise that would involve taking animal welfare into schools. I’d like to teach children about the principles of the five freedoms, focusing them back to their own lives and helping tackle problems in animal-human relationships as well as interhuman relationships.

I may not be doing clinical work, but I’m still a vet. I fill the void between behaviourists and vets helping clients have healthy pets that they are strongly bonded to.

I haven’t entirely given up the idea of doing a PhD either.