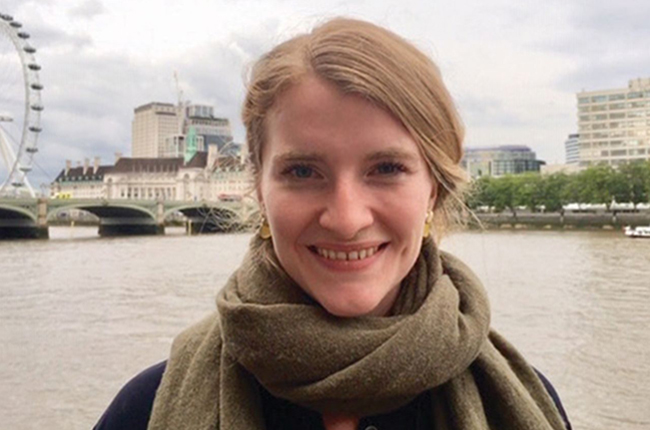 I recently made the switch from working in busy clinical practice – with its unexpected emergencies – to walking the corridors of Westminster, gold-gilded state openings of parliament and an unexpected purdah.

I graduated from the University of Bristol in 2016 with a distinction in veterinary science, having intercalated in zoology. Having been awarded several research grants and placements while I was a student, I gained skills and an interest in veterinary public health, aquaculture and veterinary development.

I didn’t go straight into practice, but initially did volunteer work as an equine vet in Cambodia and Morocco. This was a fascinating opportunity to travel and meet other vets working in diverse contexts and cultures.

I then spent two years in mixed and small animal practice in the UK before deciding to apply for this opportunity. The position appealed to me as a unique way to learn more about how policy can be used to improve animal health and welfare.

I’m also currently undertaking a part-time masters degree in veterinary epidemiology at the Royal Veterinary College, which will complement the internship and allow me to learn more about disease control in populations on a national and international level.

"Vets are hugely important in supplying expert opinion and knowledge"

Since deciding I wanted to become a vet, I’ve been consistently humbled to meet inspiring vets, vet nurses and paraprofessionals. Having the opportunity to work for Lord Trees in policy means I will continue to be inspired by the passion and hard work of those who work ‘behind the scenes’. But how do vets who work in policy influence it and why is it important?

I’ve quickly learned that understanding all sides and subtleties of an issue is crucial in developing evidence-based policy. Robust scientific evidence too is essential in making complex decisions (while not forgetting our own cognitive biases). Information, opinions and all possible consequences are explored before any new legislation is passed.

Vets are hugely important in supplying expert opinion and knowledge, addressing gaps in research or policy issues, and as veterinary researchers. We are trained to prioritise and make complex decisions, using what may be incomplete information, while working within a team or structure. As a friend of mine put it: ‘If you think anything in your working life could, or should, be done better, then you are interested in policy.’

Contrary to my vague impressions of policymakers as being distant and detached, government structure encourages engagement; listening to relevant debates, attending meetings and discussions. One of the channels to do this is through the All-Party Parliamentary Groups (APPGs). Lord Trees sits on a few of these groups, which provide a vehicle and opportunity for independent cross-party collaboration on specific issues, such as animal welfare.

My introduction to government, policy and legislation has revealed much in a few short weeks. I have attended debates on issues such as bovine TB, been getting to grips with new legislation and I prepared briefings for Lord Trees before he questioned the government on specific issues.

One of the ongoing broader issues we face is how to tackle antimicrobial resistance. It’s great to see UK industries and the veterinary sector being acknowledged for reducing usage well below targets.

Currently, however, despite ever-increasing political activity, we have a lull in actual policymaking. Bills that had not received Royal Assent before the dissolution of parliament will have been lost. It will then be up to the newly formed government to decide whether it wishes to revive them.

So, until after next week’s general election, it currently feels comparable to a Sunday evening on-call when the phone hasn’t rung yet...just don’t mention the word ‘quiet’.