Newly qualified and looking for a job? Get off on the right foot

I remember my final year. Once the light at the end of the long final-year ‘tunnel’ was in sight, there was a palpable buzz whenever more than two final-year students were together. This, it turned out, was the desperate, competitive clamour to clinch that first job.

The hushed whisperings started in about April. By June the atmosphere made you feel positively unemployable if you hadn’t been offered a position by at least five of the practices you had been to as a student on EMS. By now, if you hadn’t actually signed on the dotted line, it felt as though you were getting funny looks from other students.

Isn’t this competitiveness a tad unhealthy? Be it your ability to decipher ridiculously complicated subjects insanely fast, drink and keep down pints of milk/vodka or bag yourself an EMS placement at a prestigious equine or referral centre before anyone else; the drive to be better than your peers can feel ever-present.

I can’t help but wonder if this competition contributes towards the mental health issues that more and more veterinary professionals seem to be affected by. Is this competitive spirit inherent in the types of people who gravitate towards veterinary medicine I wonder, or does the profession encourage it? Don’t get me wrong, some level of motivation and competitiveness is clearly necessary, but at what level does it become unhealthy?

But, as one of my favourite lecturers at the Royal Veterinary College used to say, I digress! I want to share my experience and reassure those who have not yet secured a job.

I graduated in the July of 2014 and had decided to take the summer off. It came and went far too quickly. I had mail-bombed every vet practice within a 30 mile radius of home with my CV and not one had got in touch. 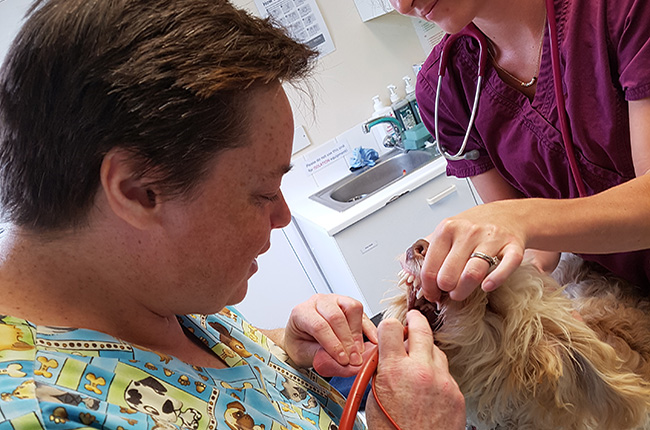 Judy felt that her first steps into the world of clinical veterinary work were taken in a very friendly, supportive practice

Then, in late September, I received an e-mail from the reception manager of a small animal practice in Bedfordshire asking if I would like to locum for them for three days. I was a tad apprehensive as you can imagine. I had not done a single day’s work as a real vet and here I was being asked to do just that. I replied, asking if she was aware that I was a new graduate? ‘Oh yes, Judy, I know exactly who you are – I’ve been watching you on my TV for the past three weeks [Judy was one of 10 vet students featured in the BBC’s television programme ‘Young Vets’] and I think you’ll fit in here just fine!’, came the reply. How could I refuse?

I pitched up on my first day and was introduced to the boss and each member of staff as they arrived. My first three days as a ‘real’ vet were awesome.

I’m not going to lie, the first few solo consultations were terrifying. Concerned owners were paying for me to ‘fix’ their beloved pets – there they stood across the table – looking at me, their eyes full of desperate expectation. But, as I got into the swing of things I began to really enjoy myself.

I was lucky that my very first steps into the world of clinical veterinary work were taken in a very friendly, supportive practice. There were some truly amazing nurses who saved my butt on more than one occasion, such as when I would appear in the prep area, holding an animal, pleading: ‘What do I do with this?’.

At the end of my third and final day I was called in for a chat with the boss and asked if I would like to stay for three months to fill in until their newly employed vet could start. Given that the reception manager had been spot on with her assessment that I’d fit in well, I accepted. I had an absolute ball in that first role, working with some amazing people.

I knew it was inevitable. It was going to happen sooner or later … the moment of my first euthanasia consultation.

It’s a bridge every new vet has to cross alone at some point. Mine was an elderly golden retriever that had been bought in by a sweet old man.I explained everything that was about to happen, he signed the consent form, the intravenous catheter was in place. He explained that the retriever had really been his wife’s dog and had been his only link with her since she passed away a year ago. It was a tender, emotional, but very respectful moment.

I knelt on the floor beside the dog at the feet of the elderly man who sat on a chair. His fingertips gently caressed the soft ear tip of his dog. I asked if he was ready for me to go ahead, ‘Yes’ he whispered and I inserted the needle into the catheter.

‘Wait. Can I ask you a question?’ I took my hands away from the syringe, rocked back onto my heels, looked up at him and said, ‘Of course’.

‘Aren’t you that vet off the telly?’, he asked.

This remains the most surreal moment of my career so far.

Find a work place where you are happy

I moved on after my three months in Bedfordshire to start my first permanent role and I haven’t looked back. Every new vet will have some hard times in their first few jobs – I’ve certainly had my fair share.

If I have learnt one thing, it is that if you aren’t happy where you are and have tried all avenues to improve the situation but failed – leave. You are going to be in this career for a long time, so why waste time in a position where you’re not happy? Being unhappy might prevent you from meeting your full potential, and may actually serve to discourage you from wanting to be a vet at all.

Find a job that will allow you to become the awesome vet you want to be. You have worked far too hard to get to where you are to not enjoy going to work.