Published: 25 Sep 2021 By John and Margaret Cooper with Simon King 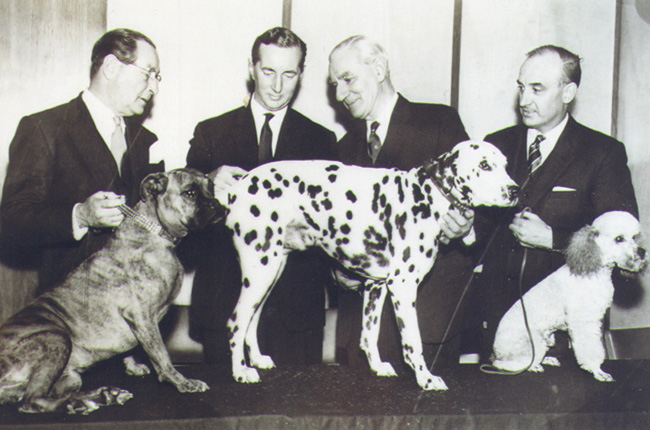 Maxwell Knight (second from right) opened the BSAVA congress in 1963 when Oliver Graham-Jones (far right) was its president. (Photo courtesy of BSAVA)

Born in 1900, Maxwell Knight was not a veterinary surgeon, although he had a strong affection for the profession and encouraged many young people to pursue a veterinary career.

He was an author and a broadcaster whose knowledge of natural history and of animals both in the wild and in captivity made him a household name.

To listeners of his BBC radio broadcasts, Knight was the man with the pleasant voice who chaired natural history discussions and answered listeners’ questions about animals, plants and the environment.

Throughout his life, Maxwell Knight kept animals and from the outset he sought veterinary advice for these. In his books, his articles, his broadcasts and in everyday life, Knight stressed the importance of consulting veterinary surgeons about health matters in animals.

He advocated developing a partnership in which the keeper and the veterinary surgeon could learn from one another; such synergism could, he argued, only serve to benefit the animal. He applied similar reasoning to the care of wild animal casualties where the value of input by a field naturalist, who understood the behaviour and needs of a wild species, was repeatedly emphasised. He put this philosophy into practice: although he and his wife Susie tended many sick, injured or orphaned wild animals themselves, they worked in conjunction with local wildlife rehabilitators as well as with veterinary surgeons.

Maxwell Knight’s rapport with the profession, in an era when most vets were not competent or not interested in treating ‘exotic’ animals and wildlife, was greatly nurtured by his close contact and personal friendship with Oliver Graham-Jones FRCVS, who was the first resident vet at London Zoo and a founder member of the British Veterinary Zoological Society.

In his autobiography, Graham-Jones recounted the challenges he faced in the job and in later years he revealed how much he learnt from Knight about the natural history of the myriad species that are a feature of zoological veterinary medicine. The friendship led to Knight’s opening the British Small Animal Veterinary Association congress in 1963 when Graham-Jones was its president.

Knight also recognised the potential of veterinary science long before the mantra of ‘One Health’ became commonplace. In his book ‘Animals and Ourselves’, he wrote: ‘Veterinary science has progressed by leaps and bounds since the war...the study of comparative medicine has also become a must among doctors and veterinary surgeons alike. We are rapidly learning more and more about the countless diseases which are shared by man and other animals.’

It goes without saying that he contributed substantially to the profession’s knowledge and understanding of so-called ‘exotic’ species. He was one of the first to encourage a veterinary input into the care of such animals; a very good example appears in his book ‘Tortoises and How to Keep Them’ (1964), where he introduces the chapter on the health of chelonians by stating that: ‘The right thing to do is to consult a veterinary surgeon.’ Knight’s particular penchant for chelonians is illustrated by his contribution to a seminal multiauthor article ‘Care of pet tortoises’ that was published in The Veterinary Record 60 years ago.

Despite his wealth of knowledge, Knight eschewed any suggestion that veterinary surgeons, who then – even more than now — were primarily trained in the care of domesticated animals, might know less than he did about exotic species and wildlife.

He had a strong rapport with the profession in other areas too. He was, for example, active in the Feline Advisory Bureau (now International Cat Care). His direct input into veterinary matters was augmented by his concerns for animal welfare. He was a strong supporter of UFAW (the Universities Federation for Animal Welfare) and very much admired its sound, constructive and scientific approach to promoting animal welfare. He served on many committees and was for some years a vice president of the Zoological Society of London.

Knight combined affection for individual animals with pragmatism regarding such issues as pest control, management of wild populations, field sports and the keeping of animals in zoos and biomedical research. He argued that, in the long term, it was the health, welfare and conservation of animals that really mattered, not ideological and political arguments. He recognised and regularly referred to the knowledge of animals displayed by many of those who looked after them on farms, in zoos and elsewhere. He stressed how much of our understanding of wild animal behaviour we owe to gamekeepers, sportsmen and country people. Some of his views about rural life and field sports may nowadays not be fashionable, but there are those among the veterinary profession who would not disagree with his opinions.

This said, Knight believed strongly that whatever the reasons for interacting with animals, people should be aware of the ability of most species to be distressed, to be frightened and to experience pain, and to do one’s best to avoid or minimise these.

However, there was another, very different, side to his life and character. After his death in 1968, it emerged from his files that he was MI5’s most gifted agent handler during the interwar years – a self-taught spymaster who challenged the status quo, and among other remarkable things, championed the recruitment of female spies. He also broke the Woolwich Arsenal spy case, uncovered a plot to prevent the entry of the USA into the Second World War and suppressed a fifth column of Nazi sympathisers (who were prepared to help pave the way for the Nazi occupation of Britain).

'He was MI5’s most gifted agent handler' 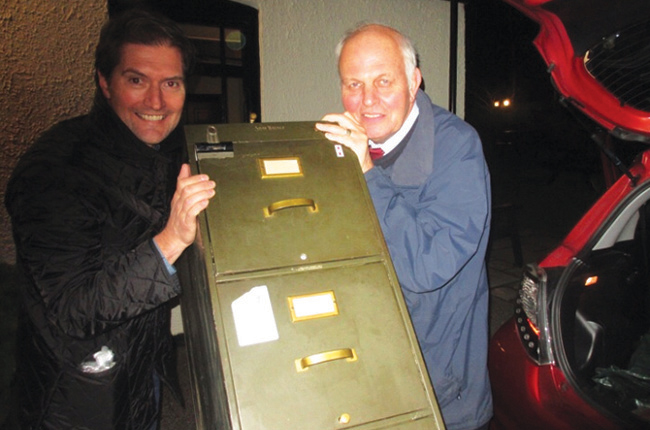 Simon King (left) and John Cooper with Maxwell Knight's filing cabinet, which was found to contain
many long-lost documents, including a 50,000-word manuscript, entitled 'The Frightened Face of
Nature', written in 1964. It was published in The Guardian in 2015, under the
headline, 'Spectre of destruction: the lost manuscript of the real-life M'

Knight was MI5’s most ‘brilliant case officer’ wrote his colleague John Bingham: ‘He mothered his little brood of case officers in Dolphin Square, caring for us in a protective leadership that was fun as well as being exciting and dangerous.’

It is remarkable to think that during key events in our nation’s history, Maxwell Knight remained a committed amateur naturalist and an early environmentalist. Indeed it can be argued that what made him a talented spymaster and prepared him for the challenges he faced as ‘M’ – his MI5 moniker – were his observational skills, derived from the study of animal behaviour, and his ability to look deep into nature. These talents were honed as a child, inspired by his father, and sharpened by his involvement with the Boy Scout movement.

In the last few years of his life Knight encouraged numerous young people who wanted to train as veterinary surgeons or pursue a career in zoology or animal care. One of these was one of these was myself (JEC). Having been my natural history mentor, Knight was supportive of my aspiration to apply for vet school and in 1966, when I went to Tanzania as Voluntary Service Overseas’ first veterinary volunteer, Knight was one of my referees.

In Tanzania, in addition to working with local livestock, I developed my own skills as a wildlife veterinarian and ‘nature detective’, leading in later years to my interest and involvement in animal forensics. The wheel had gone full circle.

Those interested in knowing more about Maxwell Knight can visit www.ffon.co.uk