Team work makes the dream work in an award-winning practice 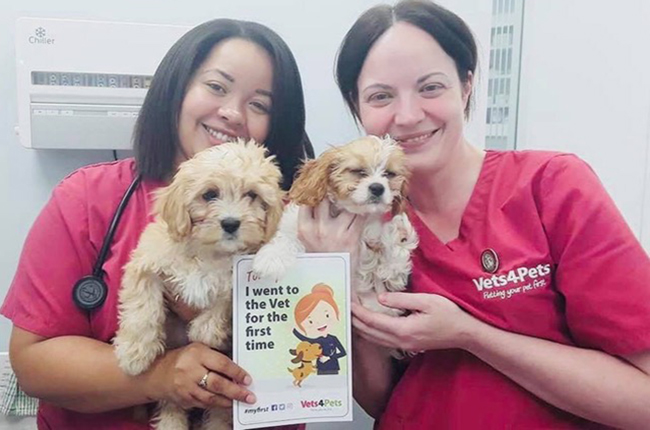 While working together in practice, vet Melissa Beck and vet nurse Lucy Gunn realised that their work ethos and outlook were similar. It led to conversations about them becoming joint venture partners and running a practice together, and Vets4Pets made it a reality.

As a child, I wanted to be a zookeeper because I was interested in penguins and marine mammals; however, during a careers evening at my secondary school, I made the decision to become a vet.

My first day at the Royal Veterinary College (RVC) is etched in my memory. It was the moment I knew my life had changed.

At the end of the summer of 2006, my parents dropped me off at my university accommodation. I enjoyed the academic challenge of studying veterinary medicine, but during my third and fourth year I had some setbacks due to health issues. I was asked to consider delaying my fourth year because of this, but through sheer determination I graduated in 2011.

My veterinary career began in a clinic in south Wales, and I then moved to a busy first-opinion practice in the Midlands. This was where I really started to develop as a vet, learning the ‘how tos’ and ‘how nots’ of client communication. I also gained lots of surgical experience.

After 18 months, I moved to another practice, which was where I met Lucy. She had a very similar mindset and vision to mine. We worked well together, and it was the practice where I grew into the vet that I am today.

From an early age, helping out on my aunty’s farm was the highlight of family visits, and from then on I knew I wanted to work with animals.

My journey into vet nursing started when I attended Rodbaston College in Staffordshire. Initially, I completed an animal care diploma and then the following year, I went on to complete the pre-veterinary nursing course. It confirmed to me that I absolutely wanted to be a qualified vet nurse (VN).

I progressed onto the NVQ VN course and gained my registered vet nurse status in 2002. It’s hard to believe it was 17 years ago.

My on-the-job training took place at a busy mixed practice that had a varied caseload. Once qualified, I moved into a referral environment where I gained further knowledge and experience in specific areas. I also worked in Australia for a year. Working and travelling around another country was an amazing opportunity.

After my son was born, I returned to work, which was when I met Melissa. We became friends and also realised that we had a similar approach to practice – we aimed to deliver high-quality veterinary care with excellent client communication and a welcoming approach.

In September 2017, we opened Vets4Pets Nuneaton. We had considered becoming practice partners for some time before taking the plunge. The set-up process seemed to flash by, and we opened our clinic a few months later.

We were fully staffed when we opened, which allowed both of us to have a decent work-life balance, and missing lunch became a thing of the past.

On opening day, no sooner had the phone gone live than we had a call from a client whose pet had an ear infection. Nerves were combined with excitement as we realised that we might have our first client within one minute of opening. She arrived 15 minutes later with her pup, and within the first hour we had seen three more patients. This was way beyond our initial expectations.

We held our official ‘opening’ a few days later. It was a successful but tiring day for the team. The clinic was bursting with potential clients. Tea and cake were provided as well as plenty of games, and we made sure we had handed out all the practice leaflets we had.

Our first few months were successful and the practice was thriving. Nuneaton is a large town with a community feel, and word-of-mouth recommendations exponentially increased our clientele.

We also wanted to ensure we provided a working environment where our colleagues enjoyed coming to work and benefited from a good work-life balance.

They told us they found the work environment stress-free and appreciated that their opinions were heard during meetings. We even found that some of them started arriving for work up to an hour early!

Our practice had been open for around 18 months when it was nominated for the New Practice of the Year award at this year’s Vets4Pets National Partner Conference.

We heard the news of our nomination from our business development manager Matt Tork, and were chuffed to bits. We then understood why he had been keen to find out if we were planning to attend. We were, but the nomination gave us even more of an incentive to go.

The first thing we did was to share the news with our team – after all, our success was down to them as much as to us. Everyone had been really hands-on and involved with the growth of the practice. We could not have achieved what we have without our excellent team.

On the day of the awards, we were nervous. It was awesome to have been nominated, but as we listened to what was being said about the winner, we felt that the amazing-sounding clinic being described couldn’t possibly be ours. Our hearts stopped racing and we began to relax as we thought we wouldn’t have to go up on the stage. When they announced Nuneaton as the winner, we were in shock – it felt as though we were accepting the award in slow motion.

We shared our win on Facebook, and among the comments, one client said: ‘This is by far the best vets I have ever used’, which seemed to prove that our decision to become joint venture partners was the right one.

We have a happy team of people who are keen to come to work and share our ethos of providing excellent veterinary care – where clients are offered options within a consistent and personal experience.