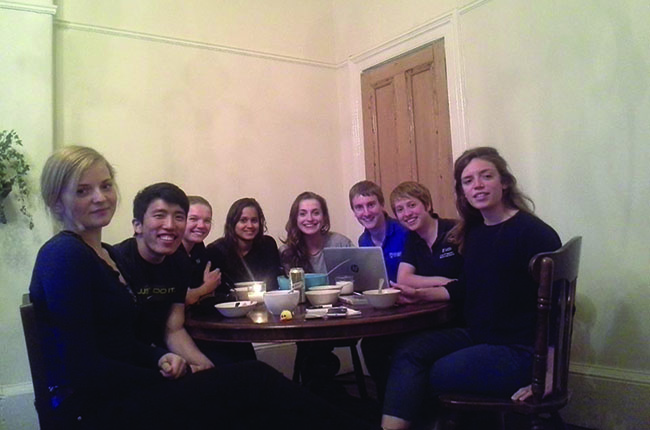 Eight vet students with a particular interest in veterinary public health (VPH) gathered in Glasgow in July last year for the annual VPH masterclass, supported by the Veterinary Public Health Association (VPHA). The purpose of the week was to show us a wide range of different aspects within this field, particularly those that get little exposure at vet school.

During the week we visited premises at various points on the food chain from animal rearing to a rendering plant, and spoke to people involved in VPH from a range of backgrounds. We met animal keepers, food producers, vets, chemists, medics and scientists, and gained an appreciation of the network that protects public health.

As a group, we got on like a house on fire. It made the week great fun, and led to some interesting discussions over shared dinners in the apartment that was VPH HQ for the week.

First stop on day 1 was Glasgow vet school, where we were given a case study to work through to get us thinking. This was followed by a hands-on gun safety practical. From there we headed to the local knackers' yard to see where fallen stock were processed. We could then appreciate what actually happens when you tell the farmer to call in the hunt kennels/knacker man at the end of an animal's life.

Tuesday's visits were a little more light-hearted – a day trip to Blair Drummond Safari Park, where our remit was to assess the park from a VPH viewpoint. First stop was the safari itself, complete with wildebeest, antelope, lions and tigers, before we headed on foot to see the monkeys, sea lions and elephants and visit the petting farm. The onsite vet then joined us and we spent a couple of hours behind the scenes. We heard about the importation of a newly acquired macaque troupe and found out how the park manages to feed so many animals.

As well as being a great day out, we learnt a lot about how things were run and got a taste of different ways of managing the VPH concerns involved when animals and people are in the same place.

On Wednesday we were based at Glasgow vet school's farm where we had a tour with an APHA vet, discussing the various roles of the Official Veterinarian. This was useful as it helped to cement lectures and the related laws in our minds – once you've seen something in practice, it is much easier to remember.

Later on we heard about the wild game industry, which is something that is usually only lightly covered in VPH lectures and something I had little knowledge of.

Thursday morning brought a much-anticipated visit to a fish farm. Howietoun Fishery in Stirling predominantly supplies young trout to restock angling rivers. This is another industry that I had no idea about beforehand, and our enthusiastic host patiently answered scores of questions and even provided us with fish for dinner.

Before we could tuck in though, we had another visit, this time to a rendering plant – essentially the ‘end of the line’. Here the bones and carcases from the knackers' yards are processed to produce a bone meal. This was probably the most enlightening visit of the week – I had learned that waste was categorised and treated, and I had heard the term rendering plant, but I hadn't given much thought as to what actually happened there. We saw the whole process and heard how the plant was operated for maximum efficiency – which helped fix another set of lectures in my mind.

Throughout the week we visited many places that we wouldn't have had the chance to otherwise. We met some great people who were willing to give up their time to answer our questions and help us to understand their role in the VPH network.

VPH is a wide-ranging field that is highly relevant in the real world, and a better understanding of it can help shape opinions on current veterinary issues. I would encourage any students who get the opportunity to join the masterclass this year to take it up – it is a fascinating week, lots fun and as an added bonus it counts as EMS.

Our group offers a big thank you to the VPHA for supporting the masterclass and to those involved in its organisation, particularly Noelia Yusta from Glasgow vet school who ferried us about for the week, and without whom it would not have happened.