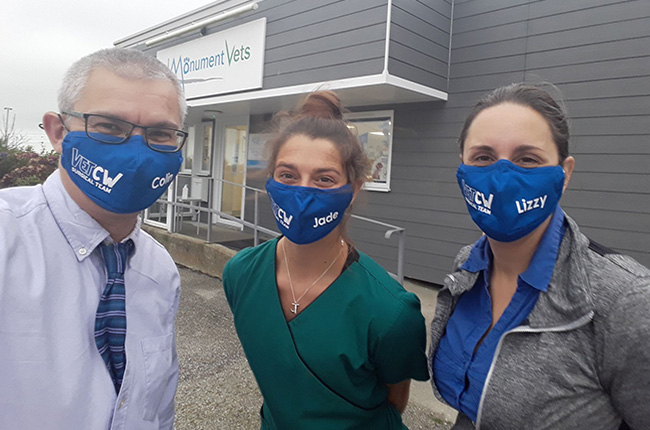 Thirty-one years ago I was a shy and spotty teenager, stood clutching a packed lunch and clean wellies outside Woodger, Dennis & Wilkins in Harleston, Norfolk, for my first morning’s work experience. ‘We’ll fire his enthusiasm, or kill it dead,’ Ian the vet told my Mum. I was to spend every possible Saturday morning and school holiday there for years: they tolerated, mentored and encouraged me; bought and inscribed an anatomy textbook when my career hopes were still just applications; and were resolute when I copped a full set of rejections. Chris, one of the vets at the practice, became a lifelong mentor and friend.

I grew up in a Hammersmith flat that was tied to Dad’s job as an industrial chemist. When the factory closed, he had to find work and a home – with experience but no degree – and ended up in Norfolk. Mum kept her job as a catering manageress in London and we travelled at weekends to be together. Their immutable commitment to taking care of and supporting me meant I could stay at the good local school for GCSEs.

Mum had trained on the job too, working from 14 years of age, she had risen from a lunchtime waitress position – something she could do between taking me to and from infant school. As a manager she always looked after her staff and they loved and respected her deeply. I’d work evening functions, joining a team with Irish grannies, Nigerian chefs and Brazilian students. I learnt the satisfaction and fun of a shared work ethic, and that there is no dent to your dignity in serving customers well. I saw the impact of leadership, providing for the team and ensuring their wellbeing. These were hugely important lessons.

'There is no dent to your dignity to serve customers well'

Learning to drive, it took me two full evenings’ work to pay for one session with a qualified instructor. It sharply clicked that investing in your qualifications to optimise your skills/value was a very good idea.

After scraping a clearing place at Liverpool university I threw myself into every opportunity for fun, escapades and writing/acting stage shows – to the detriment of the books, I’ll admit. I failed or repeated each of the first three years. Having spent much of my time in revelry, I was proper chuffed to be elected vet student president, even getting a nice letter from the dean for being helpful with some challenging situations. Work got more interesting in clinical years. One of the farm lecturers saw my presentation on cattle lameness, explaining solear ulcers with reference to the Spice Girls’ footwear, and predicted I’d be a teacher too. Vet school was a precious, happy time.

After qualifying in 1998 I started off in Nantwich, Cheshire, doing mixed, mainly small animal work – as was the norm then. After three months, a third of our year met up for a party in my practice flat; we’d all lost a stone in weight and had a wealth of triumphs and disasters to share. By then I was really enjoying surgery and would spend my weekends doing whatever CPD training courses I could. Mark Glyde, an orthopaedic surgeon at Liverpool, was hugely influential and encouraging – his enthusiasm and calm, kind manner in theatre was an inspiration.

I asked Liverpool if I could go back as a surgery resident, and returned after two years in practice. I really enjoyed passing on what I knew; I got higher marks from the students’ assessment of my teaching than I ever got as an undergraduate – although that bar wasn’t high! Some years later, a colleague mentioned some ace lectures they’d had at college, where an ortho guy had told them just what they needed to know about patellar luxation while singing Madonna’s ‘Get Into The Groove’. I broke it to her…that was me!

I met Lizzy at Liverpool. We were engaged by the summer and, as the small animal hospital wasn’t a terribly happy ship at that time, it was a natural decision to move on. After qualifying, she started in practice in Staffordshire and I returned to Cheshire: we set up home in a rented farmhouse. We built a bar for our engagement party and were married in the company of our families and college pals. I passed my surgery certificate the same year, deadlines and exam dates neatly falling between wedding and honeymoon.

My days as a senior vet at County Vets, Alsager, included a change of ownership and an introduction to the business side of running practices. While some of it felt a rough lesson at the time, it was undeniably valuable and I’ve since thanked those who helped me.

By this time, our daughter Kate had arrived and with Lizzy pregnant again, we began to think about where we wanted to settle – we wanted the children to have solid roots in one area. A chance meeting with an old uni pal at BSAVA congress was felicitous – their new veterinary hospital in Cornwall needed a surgeon. Lizzy was six weeks from having Phil when we drove down for my interview. A kindly colleague at the practice showed her round the area while I looked around the impressive and welcoming practice.

Phil was six weeks old and Kate a two-year-old when we moved house. I started on a Saturday morning, on-call, the first solely small animal vet to join the traditional practice group, and with a shiny new hospital to work in. I brought insight from previous roles, created action plans, launched a referral service and presented to all the staff, describing what an outstanding premises they had now moved into. I threw myself into work, the practice grew with a superbly dedicated team, and I joined the partnership.

Progress was rapid – not as rapid as I wished at the time, but overall every year we either opened a new branch in a ‘hub and spoke’ model, or expanded the hospital and facilities, installing a CT scanner and increasing staffing to meet demand. Clinically, opportunities to meet people in crisis with their pets and help them navigate a path forward, whether resolving pain or illness with surgery or even accompanying them through euthanasia, are a genuine privilege. I like working with people, and I love the company of animals.

As with many partnerships, there were frictions, but there was also progress and our small animal department surged ahead. There was time for holidays, camping trips, a period as a school parent governor which I really enjoyed, but evenings at home were often very late and occupied with giving advice to referring vets or administration. I was available all evenings and weekends for urgent spinal and fracture referrals, and was supporting our own first-opinion on-call team. Over 12 years I was very proud to be an innovative and supportive employer, and see colleagues grow and thrive within our practice.

Eventually came a stage (and wise advice from Andy, our trusted accountant) when financial security for my family lay with a corporate sale. The structure of the practice meant that if I should fall off my perch, the return would be far smaller, and nobody knows what the future holds. We directors accepted an offer and the practice was sold, mortgages were paid off and bewildering numbers appeared on bank statements – and I had an oddly numb feeling. I wonder how many have felt similarly? You absolutely cannot complain in any way, you’ve been incredibly fortunate, but feelings of unsettlement, even floundering are perhaps quite common.

I retreated into my clinical work. The referral side grew again, with record-breaking months, but soon the old internal structures creaked and after one ‘final straw’ day I came home and asked Lizzy if I could leave. When I came to sending a resignation letter, I was able to choose one of three I’d recently written. It was a decision that had built over time.

After what felt a long and emotional six-month notice period, we had a ripper of a leaving party at our farm. We’d recreated the vet school’s Leahurst Bar to host our 20-year college reunion, and now added fire pits and a seven metre stage. I treated myself to a Normandy chicken roasting trailer, dozens of chickens and lamb joints on great skewers roasting over log fires. With family, local friends and colleagues we catered for 200, danced to an awesome rock band and managed a speech without crying (just about). 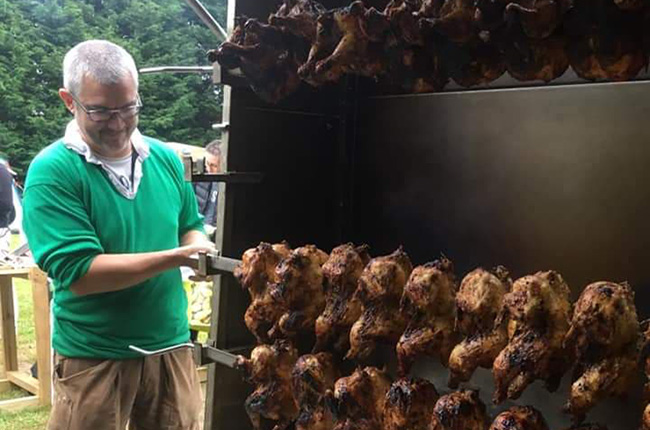 For his leaving party, Colin treated himself to a Normandy chicken roasting trailer

I’ve now had a year where I’ve been present on every touchline and at every home time, and every weekend’s plans have been undisturbed. We had a trip to Florida, saw a rocket launch, and then as life has changed for us all due to Covid-19 we’ve been fortunate to spend time together on the farm. During lockdown, we set up ‘VetWings’, an online virtual EMS site, with a group of vets and students. I was elected the Cornwall Veterinary Association president – we’ve expanded our membership to include vet nurses and students and we want to see it thrive.

Time for a new chapter

Now, a year after leaving practice, it’s time for a new chapter. We launched VetCW Surgical Team, a ‘drop-in’ service, making regular visits to regional practices, managing orthopaedic and soft-tissue cases. Surgery has always been a team effort for me, so this is partly a response to Covid-19 bubbles, but also very much the way I wish to work. Lizzy and I have brought together three former colleagues, with plans to expand further. Messaging the first practice with an outline of what we’re planning brought the response: ‘Count us in. This is great news, we were wondering how you would occupy yourself!’

And isn’t that just the essence of this fantastic profession? Relationships, friendship, a bit of mickey-taking, all with a common, positive, worthwhile purpose. I’m delighted James Herriot first hooked me into this profession and deeply and sincerely appreciative of all the help and support I’ve had along the way. The profession and its people have been good to me, given me fantastic opportunities and I’m determined that we keep on passing the baton to future generations who feel the same way about a truly worthwhile career spent helping people in the company of animals.