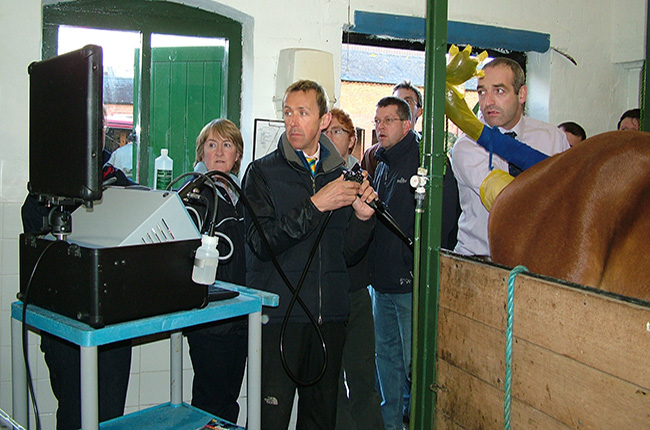 After a wonderful time at the Royal Veterinary College (RVC) as a vet student, I decided it was too good to leave and stayed on as houseman in the practice teaching unit. This was probably where I found my love of teaching, although I was never sure how well qualified I was to do this. There were many fantastic times, and you got to feature in the Final Year Revue, so I thoroughly enjoyed my year. I was inspired by many of the staff at the RVC; Mac Johnston, for example, was wonderful. I will never forget struggling to calve a massive Charolais cow and phoning Mac in absolute desperation. I have never been as grateful as when I saw his massive frame silhouetted in the moonlight in the entrance to the barn where the beast lay.

The obstetrics department as it was then was an amazing place, and included David Noakes and Ed Allen among its number. These two wonderful teachers, both of whom I was later proud to call colleagues, made me feel that teaching students was what I wanted to do. So, when, thanks to generous funding from the Wellcome Trust, the opportunity arose to do a PhD and to work with Dr Allen in the obstetrics department, I grabbed it with both hands. In those days, it was possible to do a clinical-based PhD and my study revolved around rectally examining and scanning large numbers of mares every day. There was a massive herd of ponies at the RVC in those days and Dr Allen would welcome students who wanted to develop their skills to come and help us. We used to tie the ponies up as they were wild, but extremely tolerant of rectal examinations. I will always remember the time when a policeman, who was investigating some minor incident, stuck his head into the obstetrics barn and saw all the green- gowned students with their hands up horses' backsides. I've never seen someone shut a door so quickly.

After being lucky enough to gain my PhD, I found myself in a relatively specialised niche area within equine stud medicine in general and mare gynaecology in particular. This is a portable skill and, after a couple of years at a wonderfully traditional equine practice in the UK, I began what would provide me with year-round summer. When the horse breeding season finished in the UK, I would simply head off to the southern hemisphere and start the season over again. My first port of call was ‘down under’ at the large practice headed up by legendary vet, Reg Pascoe, on the Darling Downs, the breeding centre of Queensland. In those days, the airfare to Australia was around twice what it is now and Reg was somewhat perturbed to see that I had brought my windsurf board (work/life balance has never been a problem for me). Anyway, things worked out well and, among the accolades I have been fortunate to achieve, being asked to go back to work for the Aussie luminary remains right up there. The stud farms in Australia handled much larger numbers than I was used to in the UK and busy days would involve examining over 100 mares.

"After a couple of years at a wonderfully traditional equine practice in the UK, I began what would provide me with year-round summer"

The next country to work in to avoid the UK winter was Zimbabwe, which was fascinating. It was booming in those days and we could live like millionaires in the delightful city, Harare. I worked in a practice that did its utmost to practise to the highest standards, performing high-quality stud work and surgery on the large thoroughbred population that was present in the city and its surrounds at that time. The two main vets there, Karl van Laeren and John Barnwell, were amazing colleagues to work with and the experience provided an outstanding opportunity to see a totally different culture and lifestyle, all from examining mares. Payment was a little tricky, so at the end of the season, the practice arranged for my wife, Gill, to fly out from England and then arranged the most amazing three-week safari holiday for us – from Victoria Falls in all its opulent splendour to Bumi Hills with its magnificent elephants and hippos.

My final stud season working in the southern hemisphere was in the rainbow nation of South Africa. Yet again the opportunity to spend time working in a foreign country and observe different management systems and practices was tremendously useful in giving me the experience I would later draw on during my lecturing work. 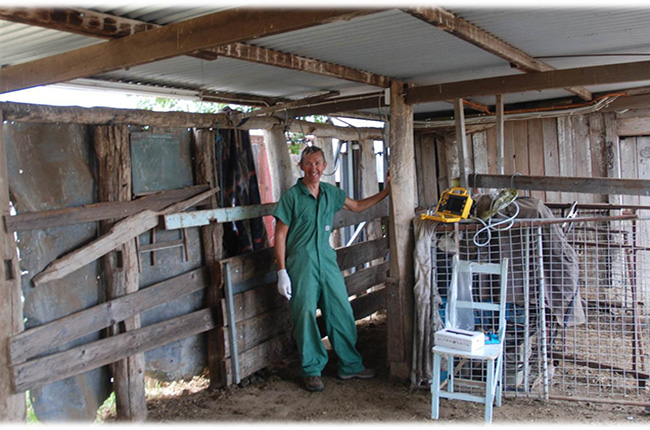 As a result of my experiences working in a relatively specialised branch of equine medicine at an early stage of my career, I was lucky enough to get the opportunity to speak at BEVA's annual congress relatively soon after graduation and, following on from that, I was invited to speak at the American Association of Equine Practitioners' meeting.

I never got nervous before speaking and put this down to the fact that, even during my school days, I enjoyed being the centre of attention, making a funny remark to make my classmates laugh. I also decided that, while giving out (hopefully) useful information during my lectures, there would always be an element of humour included. Maybe this got out of hand at times, and I have had various friendly warnings over the years not to go too far. I have even been reminded that it was cheaper to go to see Michael McIntyre than to listen to one of my lectures and that I was to remember who the real comedian was.

In time, I was invited to speak and hold courses in all corners of the globe – in countries as culturally diverse as Argentina, Brazil, Indonesia, Russia, Turkey, Iran and Colombia as well as the more obvious locations such as the USA, Canada, Australia, New Zealand and most European countries. Travel has always excited me and on many of these trips there was time to spend some time exploring the local area, usually with the added bonus of being in the company of a local colleague who could act as an expert guide. Of course, the facilities could vary from place to place and the development of PowerPoint rather than having to carry slides around has made life much easier.

Practical demonstrations could be particularly stressful as the facilities and equipment available varied enormously. In addition, horse owners would be encouraged to bring their problem mares along and several times I have almost been unable to get to the venue for lorries full of mares to be examined.

When the chance to spend a couple of years running the equine reproduction clinic at Utrecht university in the Netherlands arose, I seized the opportunity. With my enthusiasm for cycling, it seemed a logical place to spend some time. The veterinary school was vast and one needed a bicycle simply to get around the campus. This period also gave me a chance to return to teaching undergraduate students as well continuing with UK-based and overseas courses for vets and also horse breeders. Towards the end of my stay, I could just about converse in Dutch, but it is not the most straightforward of languages to master, particularly when everyone around you speaks perfect English.

I then took up a new challenge of running my own practice. This was an equine practice with a large component of stud work. For a few years I ran it on my own with some help from my Australian colleagues who came over during the breeding season. After a few years I began to work with a colleague, Charlie Cooke, who stayed with me for several years before heading for the bright lights of Newmarket; he was replaced by James Crabtree. I employed several vets over the years as assistants or extra help in the breeding season, but these two were the only full-time permanent colleagues I ever worked with in the practice and, when I sold the practice to James a couple of years ago, I found it wonderful that Charlie came back to work with him in what was the old practice I had begun 15 years previously.

The reason for the sale was that, in 2012, I was fortunate to be appointed as one of the three equine claims consultants for the Veterinary Defence Society (VDS). As someone who has made almost every mistake imaginable, I would like to think I am in a good position to listen to problems faced by colleagues within the profession and assist them, be it facing a civil claim from a litigious horse owner or a complaint from our regulatory body.

The VDS has provided indemnity insurance to our profession for 150 years and its role now goes beyond that by providing practical advice and expert help. It is a privilege to work for such an organisation. It also allows me to carry on with my teaching and CPD activities, although ‘pitfalls in equine practice’ is a more common topic for me nowadays than discussing the finer points of the mare's reproductive system.

I suspect some will feel I have never got the hang of work/life balance, with the scales heavily tipped down on the ‘life’ side in my case. My philosophy has always been ‘work hard, play hard’, whether it be working 14-hour days in the middle of the equine breeding season or cycling up a mountain in the south of France. I have never believed working 24/7 serves either you or your clients well, and outdoor activities are wonderful therapy for me. I would encourage everyone to enjoy family life. The Pycock family and our friends have enjoyed many happy days bobbing around the Mediterranean on our newly acquired motor boat, especially the Côte d'Azur, and long may this continue.

I am tremendously positive about the veterinary profession, and the equine profession in particular. When I see young colleagues smiling and laughing at the same time as (hopefully) learning something from my rather comedic style of presentation, it makes me feel lucky to be part of such a wonderful profession that has given me so much.

As with so much in life, you get out what you put in, so my final comment would be to get involved and participate in this amazing community that we belong to: you will enjoy it.