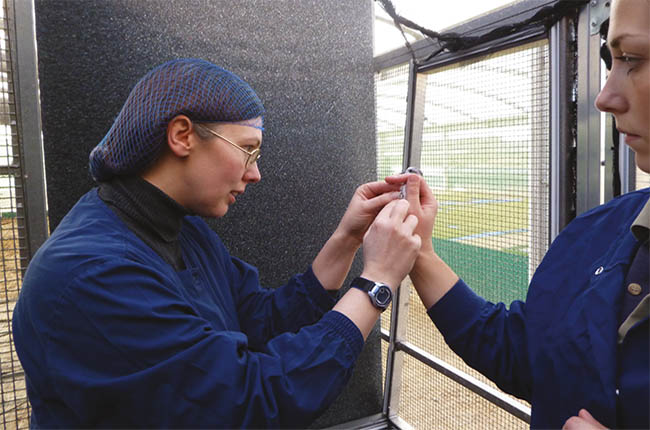 The work of the Wildfowl and Wetlands Trust (WWT) focuses on saving wetland habitats for both wildlife and people – the world depends on wetlands for much of its water and food, and the Trust works around the globe to save wetland species from extinction. Although based at the WWT Slimbridge Wetland Centre in Gloucestershire, we work with all of the Trust's nine centres throughout the UK (Arundel, London, Welney, Llanelli, Martin Mere, Washington, Caelaverock and Castle Espie), which help to connect people to nature.

We work very closely with WWT's Animal Health Officer, the Captive Animal Manager and others within the charity's Wildlife Health Unit. The role we fulfil is a complex one, as our work concerns captive animal health management (under the WWT's Centre Developments directorate), as well as veterinary support for conservation breeding programmes and wildlife health research (under its Conservation Programmes directorate).

Health management of our captive collections is a major component of our work and focuses on preventative health management of our captive birds, mammals and amphibians, including vaccinations (for duck viral enteritis) in the spring and administration of anthelminthic treatments in the autumn. We regularly visit each of our centres with captive collections, helping them maximise animal husbandry and welfare standards. We also feed into the planning of new exhibits at our centres. As we cannot be everywhere at once, we have developed strong relationships with ‘exotics’ vets who are local to each of the centres and we liaise closely with them when any of the animals require veterinary treatment. As part of the job-share, we have each taken responsibility for different WWT centres.

A particularly exciting and rewarding part of our job occurs over the summer months, when we provide veterinary assistance to the team rearing common crane (Grus grus) chicks for reintroduction as part of the Great Crane Project. This project, a collaboration between the WWT, the Royal Society for the Protection of Birds, Pensthorpe Conservation Trust and Viridor Credits, aims to reintroduce the common crane in south-west England and use it as a ‘flagship’ for conservation of wetland habitats. The species was once widespread in the UK, but is thought to have become extinct through hunting and loss of habitat. The project is now in its fifth and final year.

Each year, up to 30 eggs are collected from the nests of wild cranes in eastern Germany, under licence, and transported to WWT Slimbridge where the chicks are hatched and reared in a specially-constructed biosecure facility. We carry out pathogen screening during the rearing phase and each bird also undergoes a full health screen. The birds are fitted with monitoring equipment (all carry radio tags and some also have GPS transmitters) just before their transfer to Somerset, where they are held in a ‘soft release’ pen for up to two weeks prior to release. Thanks to the success of this project there are currently 66 free-living cranes in Somerset and Gloucestershire. 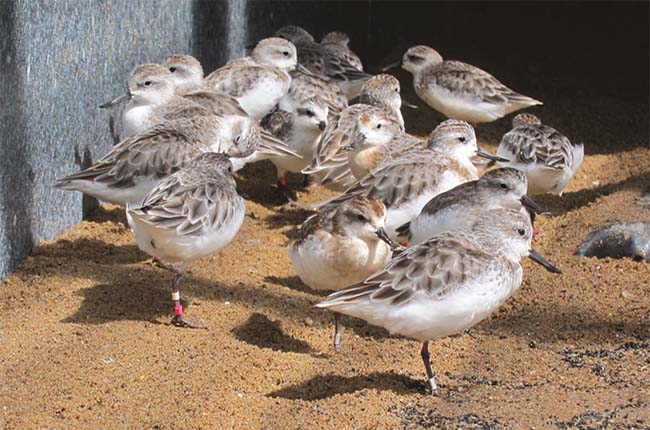 The WWT is one of many partners in an ambitious project which aims to save the spoon-billed sandpiper (Eurynorhynchus pygmeus) from extinction, and we are also privileged to provide veterinary support to the captive breeding of this species at the WWT. The wild population of spoon-billed sandpipers breeds on tundra wetlands in north-east Russia and winters on tropical wetlands in south-east Asia. With a global population estimated at fewer than 100 pairs, and an annual decline rate over the last decade of 26 per cent, the species could be extinct within the next decade. As well as loss of wetland habitat in Asia, the most immediate threat is trapping by subsistence hunters in winter. The captive population has been established to guard against extinction, and with a view to possible future reintroductions. Renowned for its wild bird research, the WWT is celebrating the 50th anniversary of its research on the Bewick's swan (Cygnus bewickii) this year, and we are also closely involved with monitoring and disease screening wild populations. This often involves sampling of swans, geese and ducks at wild bird catches on the reserves at each of our centres, usually during the winter months when migrant species of waterfowl are overwintering in the UK. It's often cold and wet but, with a great team of people involved, always enjoyable.

We are privileged to work with an extremely fun, skilled and dedicated team of animal carers and conservationists. This work presents a varied and exciting workload throughout the year and, with new projects and challenges constantly coming to light, you never know what you will be faced with from one day to the next – it's fantastic!

Michelle O'Brien wanted to be a vet from the age of five and job shares to spend more time with her daughter. She explains: ‘I've always known I wanted to be a vet and after retakes and a lot of work experience gained at vets, on farms and at London Zoo (ZSL), I finally secured a place at the Royal Veterinary College in 1995. Volunteering in the Invertebrate Conservation Centre at ZSL was a fantastic experience and led me to an even greater interest in the care of exotic species (no matter how small). I expanded this interest by taking the opportunity to see practice with a variety of exotics vets during my time at college and carried out my final-year elective at ZSL and Whipsnade Wild Animal Park. I qualified in 1999, and worked in a general practice that had an exotics referral centre. I worked there for six-and-a-half years and gained my certificate in zoological medicine in 2005. Although I loved interacting with individual clients and their animals, I felt that I wanted to explore the application of veterinary medicine on a wider scale.’ 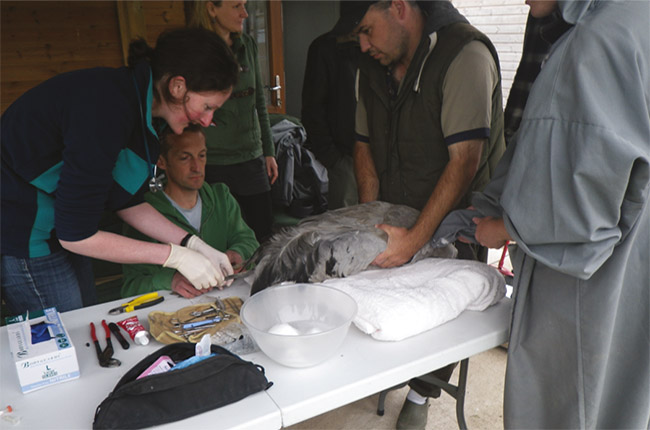 A crane is given a health check by Katie Beckmann

In 2006, Michelle volunteered at a marine mammal and turtle rehabilitation centre in Florida and then moved to the Wildfowl and Wetlands Trust (WWT), where she has worked ever since. ‘I was originally employed as a research officer, but after two years I expanded my veterinary role to become the veterinary and wildlife health officer in 2008. In 2012, I went on maternity leave for 11 months and my role was filled by Katie. We currently share the job, which works well for both of us and has further expanded the veterinary resources of WWT,’ she says.

Katie Beckmann was also set on being a vet from an early age, and says her job share gives her the opportunity to follow related interests: ‘I had a strong interest in natural history and thoroughly enjoyed an intercalated year in zoology during my veterinary degree at Cambridge (graduating in 2001). After a year in mixed practice in the Cotswolds, I spent three years working as an equine vet, in Buckinghamshire, Australia and, briefly, for an equine charity in The Gambia. Like Michelle, I wanted to explore veterinary work in a wider context and ultimately decided to pursue my interest in wildlife conservation and management.’

Following work experience in conservation research in the UK, and with wildlife vets in East Africa, Katie studied for an MSc in Wild Animal Health with the RVC and ZSL in 2006/07. ‘It was a hugely enjoyable year and an excellent introduction to the field,’ she says.

After an externship at the Dubai Falcon Hospital, she started work as a wildlife vet at ZSL in 2008, on disease surveillance projects for a range of British wildlife species. She joined the WWT in 2012, initially covering Michelle's maternity leave, and then embarked on the job share. She has since also returned to ZSL to work on the Disease Risk Analysis and Health Surveillance project (which carries out health monitoring for Natural England's Species Recovery Programme and for other wildlife conservation NGOs); she currently works part-time at both the WWT and ZSL.