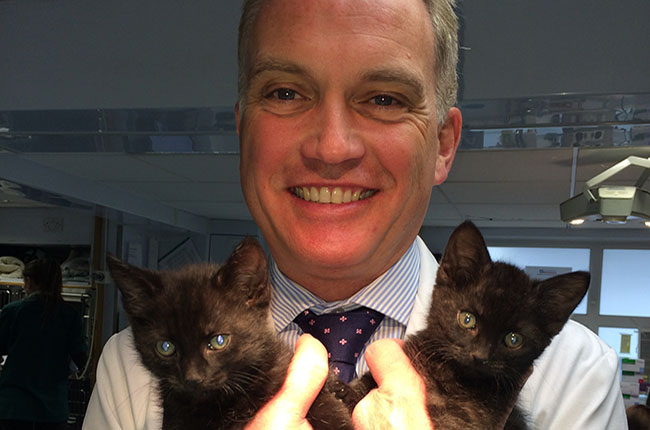 A focus on small animals

As a child, during family holidays, I was always the one to be found befriending the local stray dogs, so my interest in animals was there from the outset. In 1986, I began studying at the Royal Veterinary College and, during my final year, I realised that small animal practice was changing. Pet owners were recognising that so many more of the various illnesses and problems that pets got could be treated, improving their quality of life and extending their life expectancy. In addition, pet insurance was becoming much more common and people were able and prepared to spend more money on their much-loved pets. I felt that it would be possible to undertake more challenging and stimulating veterinary work in this area of practice than in other fields of veterinary science. This led me to focus on small animals once I qualified.

My first job was at the RSPCA's Harmsworth Memorial Animal Hospital in north London – a role I found personally and professionally satisfying because referring clients was simply not an option and the buck stopped with the clinical team. The learning curve was massive, of course. We would often see more than 60 cases during a morning's consulting session so I quickly learnt how to spot emergency cases and my triage skills came on in leaps and bounds. Because of the breadth of our caseload I became interested in radiology and surgery and, in 1994, I became a certificate holder in radiology.

In August 1993, the BBC had planned to broadcast a week of live programming from Addenbrooke's Hospital in Cambridge. When they started to research the programme, however, they realised that the August bank holiday week was likely to be quiet as many of the consultants were on holiday. They needed a plan B quickly and approached David Grant, then clinical director of the RSPCA's Harmsworth Hospital, about filming the charity's work instead.

The first we knew about it was at the start of August when David came into the staff room and announced: ‘Great news – the BBC is filming a week of live programmes from Harmsworth in a couple of weeks.’ Having dropped his bombshell, he left the room. While my colleagues and I were initially concerned about the practicalities, the BBC team was amazing and integrated into the hospital so well that there was no adverse effect on the day-to-day caseload.

During that first week, a kitten called Candy was brought in. She had fallen from the window of a high-rise flat, breaking both her back legs and her mandibular symphysis. The series producer convinced me that it would be a good idea to anaesthetise Candy live on air that evening prior to taking her to theatre to repair her broken legs. The opportunity for things to go wrong in front of a live television audience, which we were staggered to learn was seven million, was breathtaking.

"The opportunity for things to go wrong in front of a live television audience, which we were staggered to learn was seven million, was breathtaking"

During the camera rehearsal half-an-hour before the live programme, we agreed that one of the nurses assisting me would provide commentary to enable me to concentrate on the patient but, when the director announced ‘10 seconds to live’, she had an attack of stage fright and said ‘I can't say anything.’ The floor manager was unfazed and just said: ‘Jeremy, you will be answering the questions – 3, 2, 1 cue Linda’ (the presenter). Candy's anaesthetic was watched live by the Great British public, I was questioned by the interviewer throughout and all went well. For the record, so did Candy's operation. Live programming is certainly a buzz.

The series was only commissioned for a week, but a 13-week series soon followed, plus a Christmas special, and the BBC went on to film two series a year for the next six years, as well as spin-offs such as the Animal Hospital Roadshow. The roadshows were prerecorded and good fun but the directors were keen to film everything as if it was live, so they wouldn't let us know in advance what animals we were to be asked about. I particularly remember one little boy from Edinburgh who opened a cardboard box in front of me to quiz me about the health of his stick insect. They were great times and it was a privilege to be able to show the public how a modern veterinary practice works. I still have very fond memories.

Television ‘stardom’ aside, the Harmsworth was a wonderful place to work and a fantastic opportunity for a new graduate. I wanted to make a difference for pets whose owners couldn't afford private vet bills and we fulfilled that role. There were high points on a daily basis, treating sick pets that wouldn't get treatment elsewhere and helping to educate their owners. The low points were the cruelty cases brought into the hospital by the RSPCA's inspectors but even then we were able to make a difference, even if it was euthanasia to prevent further suffering. I remember one case, brought in on a Sunday evening not long after I had started at the hospital. A German shepherd dog was collapsed in its owner's arms. On the examination table, I found his furry coat was hiding the fact that he was completely emaciated. Sadly, the owner had lost his job and had stopped feeding him because he could not afford to do so. The dog had collapsed from malnutrition. We managed to nurse this dog back to health and it eventually made a full recovery. The owners were banned from keeping animals.

I remained at the Harmsworth until 2000 when I was approached by the Goddard Veterinary Group to take over as head vet at the first hospital that Philip Goddard had bought in west London. At the time, the group just had the hospital and plans to open up a branch in Harrow Weald where we were to convert a butcher's shop. Sixteen years later we have the Mandeville Veterinary Hospital in Northolt and 11 branches in this region of the group. In total, the group has three hospitals and 46 branches across London and is continuing to grow.

"Television ‘stardom’ aside, the Harmsworth was a wonderful place to work and a fantastic opportunity for a new graduate"

Having been based at the Mandeville for the past 16 years, I still look forward to the challenges of the day every time I put my key in the door. We see a fascinating range of first-opinion cases and referrals from our branches and I am lucky to have a great team of vets, nurses and support staff to take care of the patients entrusted to us. We also work with specialists such as Andrew Holloway (diagnostic imaging), Sally Turner (ophthalmology) and Michael Hamilton (orthopaedics), who all run second-opinion clinics at the hospital.

Goddard Veterinary Group has continued to grow to the extent that we are in the process of extending into the hospital's garden to create more ward space, a medical prep area, a dedicated dental x-ray and dental operating theatre and a CT unit.

My week is split between clinical and non-clinical days and I find myself spending more and more time running the business and less time dealing with clinical cases. This, in itself, is an enjoyable challenge and I relish the opportunity of continuing to extend the clinical services we offer.

In 2014, I was asked if I would apply to become a trustee at the Blue Cross and, after interviews, I was delighted to be asked to join the board. This is a role that I fit in around my day job. Working for a forward-thinking charity that makes a difference to animal welfare is something that I find immensely satisfying and it's nice to be back working for a charity again after a break of 14 years.

The veterinary profession offers challenges and stimulation for the duration of your career and it is a particularly exciting time to be entering it as it continues to evolve – advances in technology, greater specialisation and the growth of corporate practices play their part in transforming the landscape. There are many opportunities for vets whether they want to work full time or just a few hours a week and still experience great job satisfaction. We are lucky to be in it.