Recognition for a career dedicated to marine mammal conservation 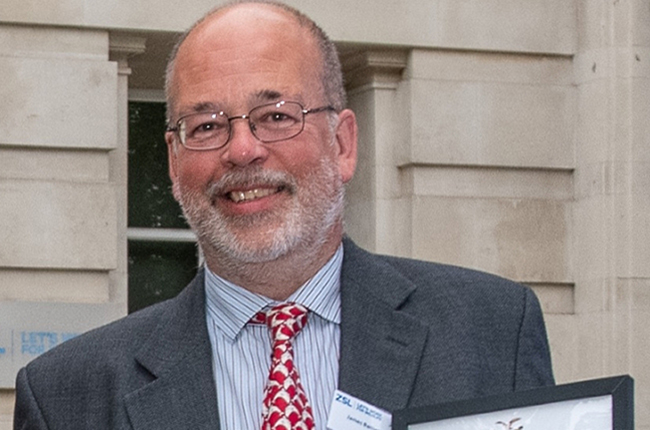 The award of the Zoological Society of London (ZSL) Silver Medal marks James Barnett’s contribution to the public understanding and appreciation of zoology, through such activities as citizen science, education in natural history and promoting participation in wildlife protection.

James has devoted his life to the conservation of marine wildlife, not only through his professional career, but also in a voluntary capacity. In particular, he has significantly increased our knowledge of seals, whales and dolphins through his examination of animals found stranded dead on the beaches of Cornwall.

In the 1990s, James became the vet at the Cornish Seal Sanctuary, which led to his appointment as veterinary director of the UK marine mammal rescue charity, British Divers Marine Life Rescue. This was a voluntary position that involved training members of the public to become marine mammal medics, able to rescue live-stranded marine animals. He also shared his expertise with other animal rescue organisations, vets and RSPCA inspectors.

"James has significantly increased our knowledge about seals, whales and dolphins"

In a later role as a veterinary investigation officer at the Animal Health and Veterinary Laboratories Agency (AHVLA) in Truro, James conducted a significant number of postmortem examinations of cetaceans and seals, under contract to ZSL’s UK Cetacean Strandings Investigation Programme (CSIP). He was also involved in the investigation of the mass stranding of short-beaked common dolphins in Cornwall in 2008, one of the most significant mass stranding events to have taken place in the UK.

Since Defra closed the AHVLA (now the APHA) in Truro in 2013, James has continued to conduct postmortem examinations for the CSIP on a voluntary basis and in his spare time.

He works closely with the Cornwall Wildlife Trust Marine Strandings Network, which records stranded marine wildlife in the county and has helped to train numerous volunteers in the safe retrieval of stranded cetaceans, seals and turtles for postmortem examination. In addition, around 40 volunteers, together with students of zoology, have been trained by James to assist with these.

Each year, he demonstrates postmortem examinations at the University of Exeter in Falmouth, in partnership with pathologists from the CSIP. These educational events greatly enhance the students’ understanding of anatomy, physiology and pathology and provide a unique opportunity for them to learn from experts. 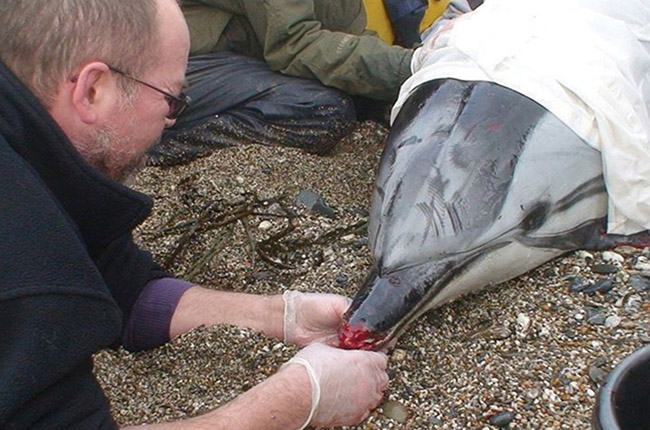 James shares his skills and knowledge freely with other strandings networks and conservation organisations worldwide.

One organisation that was set up to ensure best practice in the management of marine mammal rescues and the humane treatment of stranded whales, known as the Marine Animal Rescue Coalition, presented its first lifetime award to James for his ‘outstanding contribution to marine mammal rescue’.

"He shares his skills and knowledge freely"

The Cornwall Seal Group Research Trust is an evidence-based conservation charity supporting a large network of volunteers which aims to learn more about the ecology of grey seals in Cornwall. As its veterinary adviser, James advises on the causes of death of this species. He recently investigated the death of a seal that had been entangled in 35 kg of discarded fishing net and other plastic debris and described it as the worst net-related injury he had seen in 27 years of working with seals.

James’ contribution to marine mammal science impressed the ZSL awards committee. In a 15-year period, he conducted postmortem examinations on 225 cetaceans of 11 different species (including the Cuvier’s beaked whale, the Sowerby’s beaked whale and fin whales), 78 seals and one basking shark, believed to be the first such examination of this species in England. These events demonstrate a continuing need for James’ work and the reason why the award is so well deserved.

On receiving the medal, James said: ‘I am completely blown away that my friends and colleagues put me forward for this award and particularly that my dear friend, Vic Simpson, who is greatly missed, instigated the application. I will be forever grateful to them all.’

1990: Vet at the Cornish Seal Sanctuary