Intercalating in global health with the One Health project 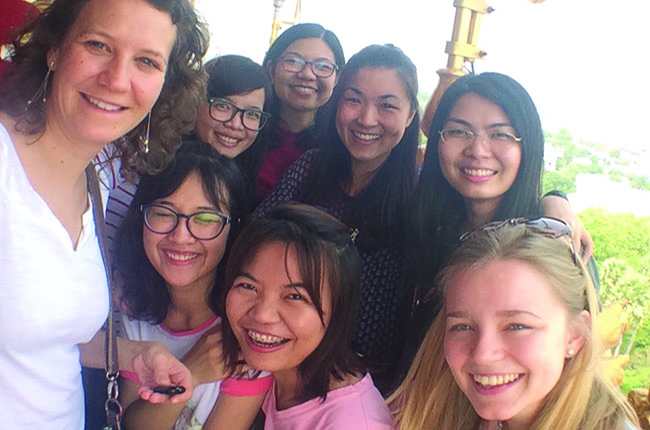 I am often asked why I decided to pursue a degree in global health, and I can only explain the reason as a self-indulgent interest. It wasn't an easy decision to make but, ultimately, my sense of adventure and anxiety that I would regret turning down the opportunity was enough to make me take the leap of faith.

As the first vet student accepted onto the course, studying alongside medics and biomedics, I represented an interesting One Health ‘experiment’. To begin with, many medical students seemed confused as to why I was there, since the crossover between animal and human health had, perhaps, never occurred to them. Some students also seemed concerned that my lack of knowledge of human medicine would put me at a disadvantage, whereas in reality thinking about only one species made life a whole lot easier!

The global health course was a whistle-stop tour of the global burden and distribution of disease (infectious and non-communicable), approaches to prevention and control of disease and the heterogeneity of health systems worldwide, underpinned by methodological teaching in epidemiology, research principles and critical appraisal skills. Topics ranged from mathematical modelling, developing new vaccines, sanitation engineering and the role of science and technology in development, to anthropology, mental health, epigenetics and climate change.

As much as possible the teaching was very interdisciplinary and I particularly enjoyed topics such as the role of the pharmaceutical industry and trade agreements in access to medicines, and ethical issues of research in resource-poor countries, which required exploration into politics, economics and other social sciences. A substantial amount of time was spent considering how health is measured and how issues are prioritised in the process of policymaking by the huge range of stakeholders involved in the global health system. I found this particularly eye-opening as these topics are never touched upon in the veterinary curricula, but they felt particularly relevant.

Perhaps inspired by the small amount of sociology we studied, I sometimes felt that approaches to certain disease challenges were ‘over-medicalised’ with a lack of cultural sensitivity. Medical sciences certainly have a lot to offer in terms of technical and innovative solutions to health problems, but without investing in social and governmental change these problems won't be solved. However, this is exactly the dogma that the interdisciplinary ‘discipline’ of global health is trying to overturn, recognising that global health inequalities must be tackled from all angles and as a team effort in order to reach the most pragmatic solutions. I certainly think that my veterinary training thus far had given me a more holistic attitude to the causation of disease and I was far more accustomed to the idea of considering environmental changes to prevent disease outbreaks and production losses.

A view on animal health

Sadly, but unsurprisingly, I found that little attention was paid to animal health in the context of development and food security. Zoonotic and foodborne disease risks are a huge problem in resource-poor and rich countries alike. Moreover, in many developing countries where farming is the primary occupation, animal health is crucial to maintaining adequate standards of nutrition (a key aspect of human health) and the economic stability of the country. I was a strong advocate that animal health should not be overlooked in class discussions, and I hope that future vet students will do the same!

After an intense two terms of lectures the university set aside three months to carry out a research project. Trying out research was another of my aims in intercalating and I was lucky to be given a fully funded project on the neglected topical disease opisthorchiasis, caused by the south-east Asian liver fluke Opisthorchis viverrini, which took me to Thailand for two months. I worked in university labs in Bangkok and Khon Kaen in north-east Thailand, attempting to extract DNA from single O viverrini eggs in order to carry out population genetic analysis. However, what we didn't realise until we got there (due to a few hitches in communication with the Thai scientists) was that no-one had even isolated a single egg before.

"It was an unforgettable character-building experience nonetheless"

Consequently, my first experience of research, combined with my first experience of working in a foreign country completely on my own, could definitely be described as a ‘baptism of fire’ into the world of research, but it was an unforgettable character-building experience nonetheless. I felt as though I learnt an unquantifiable amount about the process of science and research as well as Thai academia and culture. And I haven't been put off the idea of doing further research either. After handing in my dissertation, all of the pain that went into it seemed to vanish immediately and I deliriously started imagining what my next project might be...

The year went by in a flash and I'm now gingerly readying myself for the last two years at vet school. My ambition to be a large animal vet survives, but there's no denying that I've been completely taken and absorbed by the world of global health. I would like to pursue a career within the field as a vet, without feigning as a human medic, and I strongly believe that vets have enormous potential to help in the pursuit of global health equity. The concept of One Health is most powerful within global health where animal expertise can impact on the health and welfare of humans and animals across the world.

Importance of One Health

Raising awareness of One Health is crucial and there is concern within the veterinary profession that our expertise is not recognised or valued by allied health professionals, as revealed in the BVA/RCVS Vet Futures project. The profession needs to advocate and lobby for animal health to be prioritised in global health governance and policymaking, as well as promoting the value of veterinary expertise. I hope that more vet students will be encouraged to intercalate in global health; I can wholeheartedly say it was one of the best decisions I have ever made. I am certain that global health needs many more vets and in turn vets need more global health!