Injuries end one career, but open up another 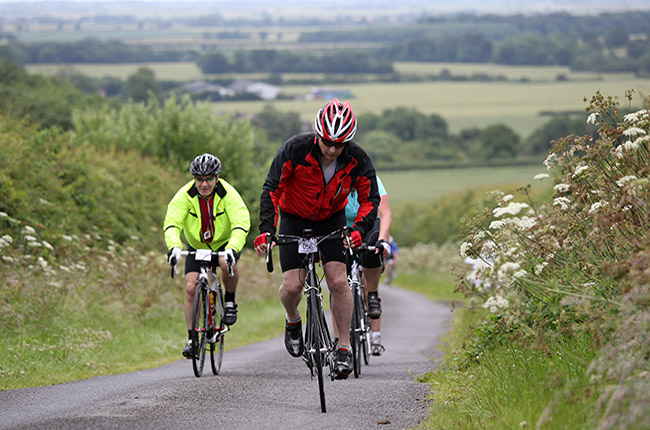 As a keen cyclist since my student days in Liverpool, I raced virtually every year until 2012, when I sustained multiple life-threatening injuries that brought my career to an abrupt halt and my life was turned upside down.

During a race, I think I must have touched the wheel of a rider in front of me. It seems that my head hit the kerbstone of a farm entrance. Although my helmet saved my life, I sustained a serious list of injuries: a basal skull fracture, multiple brain haemorrhages and subdural haematomas, a subarachnoid haemorrhage, five broken ribs, a punctured lung and a broken collarbone.

My wife Annika was told that I was unlikely to survive – it was a real shock when I later learnt this. I think I always believed I was indestructible!

Four months later, having been in an induced coma and had multiple operations, I was sent home from hospital, but was unable to stand unaided. It was clear that I couldn’t work, nor was I allowed to drive following my severe head injury.

Knowing of my problems, a neighbouring practice offered to buy my practice. I really had no choice but to sell up – I haven’t worked as a ‘proper vet’ since.

During my recovery, Annika came across some notes from a talk that I had given to Women’s Institutes and Young Farmers’ Clubs back in the 1990s and she suggested that I write them down and try to get them published. My manuscript entitled ‘Cows In Trees and Other Stories’ was accepted by Quiller Publishing and released in July 2016. It has now sold over 2500 copies around the world.

I sent a copy to my former boss and he telephoned to say he liked it and had laughed a lot. During the conversation, he reminded me of a tale that I had omitted and I decided to try to recall other tales for a second book. The sequel is called ‘The Dog With the Head Transplant’.

After qualifying, my only career plan had been to work in mixed practice and to eventually become a partner.

Working in Burnley, East Lancashire, at a truly mixed practice I had really supportive bosses. David Greenhalgh and Brian Heal created such a friendly atmosphere among the staff that, 30 years after I moved to Lincolnshire, I still count them as close friends. From them, I learnt that if I was ever to employ new graduates, I would treat them with as much respect and give them the same support I had when I was recently qualified.

"I always loved the clinical side of being a vet, but running a practice and the business side of it I found stressful and difficult"

During my first spring, I found the rise of sheep work challenging and decided to do something about it. I made what became one of the most important decisions of my career – I joined the Sheep Veterinary Society.

I did so for educational purposes, and didn’t expect that I would also establish lasting friendships. My first conference was in a town I had never heard of – Horncastle in Lincolnshire. Little did I suspect that five years later I would be living there, having joined a well-established mixed practice – Banovallum Veterinary Group. I later became a partner and eventually the sole owner. I always loved the clinical side of being a vet, but running a practice and the business side of it was stressful and difficult.

The best aspect of my life now is not running a practice and no longer managing people. I certainly don’t miss out-of-hours emergencies.

If I was still in practice, it is unlikely that I would have written and had published two books of tales from my career. Writing about my experiences – laughing as I did so – proved therapeutic after the sudden loss of my job.

Now my career is best described as an author and speaker because I continue to give presentations, updated with the newer stories.

These days I concentrate on the important aspects of life – my family and my return to competitive cycling, albeit as a para-cyclist. My aspiration is still to be as good as I can be when competing.

My wonderful neurosurgeon Gerry O’Reilly is very encouraging. I think that my results have not been too bad for a nearly dead man, and he is as pleased as I am with any good result. I must count as one of his ‘successes’.

My main challenges now are physical. I can walk, although not as fast as I used to, and with time and patience I should continue to improve. The shunt in my skull occasionally causes problems, but I just have to look back and think where I was seven years ago and remind myself that I’m now a moderately successful para-cycling athlete. I achieved 11th place in the National Para-Cycling Championship in 2017; fifth in 2018 but dropped to sixth place in July 2019. It’s a never-ending battle to be stronger and fitter.

As a devotee of a time-consuming sport, work-life balance has always been a challenge. While working, I used my free time efficiently – having my bike and equipment ready for when I got home and having a training system whereby I gained maximum benefit from short periods of training.

I have also enjoyed many cycling holidays in France, Corsica, Sweden and across the UK. Despite the fact that my sport also took me to intensive care at Hull Royal Infirmary, I regard it as an extremely satisfying sport, one that was a very important stress-buster when I was working.

"Remember that things always turn out okay in the end...if it is not okay, then it is not the end"

Nothing upsets me more now than people questioning my decision to continue riding and racing. They just don’t understand what it means to be able to return to an active life. Should I sit on the sofa all day, watching TV?

Since my accident, these words by Alfred Lord Tennyson have been my philosophy: ‘That which we are, we are; one equal temper of heroic hearts made weak by time and fate but not in will; to strive, to seek, to find, and not to yield.’

Apart from cycling, I have long been a fan of birds of prey and have taken it upon myself to monitor the thriving local population of red kites, birds that in my youth were nearly extinct in the UK. To have them flying over our valley here in the Lincolnshire Wolds pleases me no end.

Would I recommend a vet career?

Absolutely yes. The job satisfaction is unequalled. Of course there are difficulties and downsides, but they can be managed. The job is rarely boring, and the real joy of the job is the sheer variety of challenges that are presented every day. There is no shortage of interesting job options for someone with a veterinary degree, but anyone considering the job should see practice first.

Advice to my younger self?

In terms of clinical advice, it would be to attend a course in practical surgery much earlier in my career. More generally, it would be to always wear that cycle helmet, and remember that things always turn out okay in the end...if it is not okay, then it is not the end.

Thanks are due to my consultant Gerry and Rory O’Connor from VetLife for his support after I lost my career, and my family who have gone above and beyond the call of duty.

My professional colleagues and friends have been very supportive, especially that most friendly of societies – the Sheep Veterinary Society – I was president in 1999 and it kindly honoured me with life membership in September 2014.

1988: Certificate in sheep health and production

1999: President of the Sheep Veterinary Society