Combining direct treatment of horses in India with research into disease 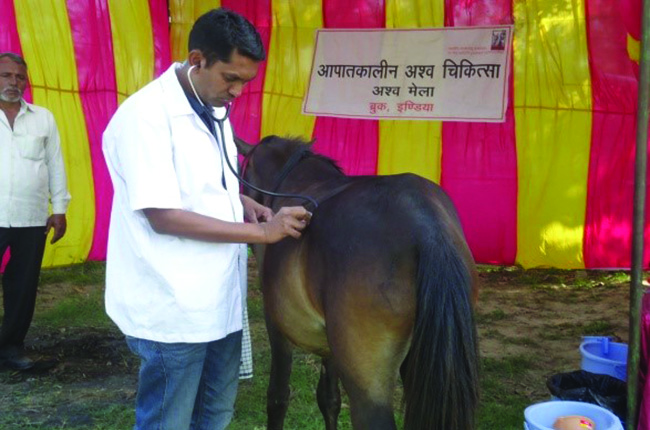 I grew up listening to stories about how great warriors relied on horses in battle; they fascinated me.

My first job after qualifying as a vet in India was on a farm that used horses to produce serum for anti-tetanus and anti-snake venom. Seeing cruelty being meted out to animals on a daily basis took its toll on me, so I left to explore other opportunities.

Getting the job was a dream come true. However, my next challenge was to convince my family to allow me to take the job. It was a big issue for my parents who would have preferred me to live nearby, but I convinced them, and my wife, and started on my career journey. It wasn’t long before I heard that Brooke India, an affiliate of international charity Brooke, had a vacancy for a veterinary officer.

I was posted to Saharanpur district, in Uttar Pradesh. Here, the charity provides free veterinary services for the local community. As well as educating horse owners and the charity’s staff, my main job was to treat emergency cases coming from nearby villages.

Daily challenges offered an opportunity to learn and I learnt a lot.

Horses are widely used in India. My work was with equids in villages and brick-kilns, market places and Tonga stands (where carriages for hire wait for customers).

As a young vet with only two years’ experience, winning Brooke India’s ‘Most inspirational vet’ award and being a runner-up in Brooke UK’s veterinary awards (celebrating 75 years since the charity was founded), were motivational.

Promotion and move to Delhi

Promotion to manager/veterinary officer in Delhi, meant handling the day-to-day activities of the clinic as well as helping our small team treat animals in need.

The majority of cases – especially colic – happened at night and winter nights were especially hard. It meant braving the harsh weather to visit sick horses that couldn’t be brought to me.

I also learnt to deal with urban equine owners who had very different attitudes from rural villagers. Motivating them to adopt better practices was difficult. The location caused problems too, and getting stuck in traffic jams was one of these.

Despite the challenges, the gratitude expressed by the animals’ owners meant our efforts were worthwhile.

A year later I was promoted to a role that saw me mentoring and developing the skills of vets and paraveterinary staff, as well as teaching aspects of equine health and welfare.

As senior veterinary officer, I coordinated the team of vets and paravets that visit equine fairs.

More than 50 of these take place across the country annually and the equine population can be between 1000 and 5000, and some very large fairs have up to 20,000 animals. 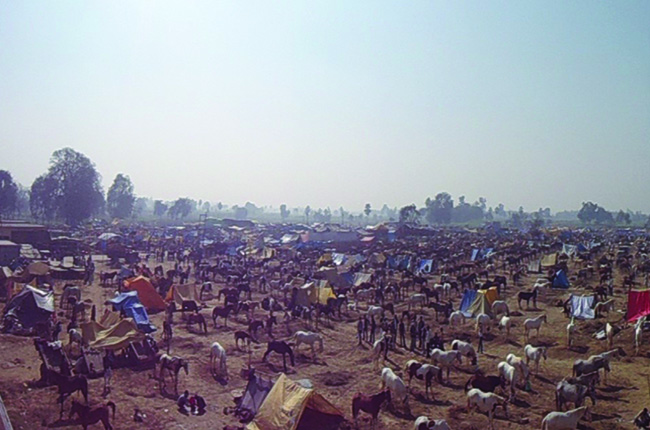 Such a large number of animals and their owners (and sometimes their families too) attract farriers, hair clippers, local health service providers and so on.

People travel long distances to get to these events. Horses are often overloaded in small vehicles and are transported without food, water or a thought for their safety. Others walk long distances without rest and may suffer from exhaustion and lamenesses. Resources are often poor, with a lack of drinking water, shade or proper ramps for loading and unloading animals.

The remote locations of the fairs makes attending them difficult, but there is much satisfaction to be gained from being able to help large populations of animals and people.

They also offer an ideal opportunity to hold training events on aspects of horse welfare, where I used puppets, games and videos to get my messages across.

It was at one of these fairs that I came across a tribal community, Qalandars, which turned out to have a profound effect on my life.

Qalandars initially migrated from parts of Afghanistan, settling in northern areas of India, where they make their living breeding and selling mules.

Surra (trypanosomiasis) is common in their animals, and this was an excellent opportunity to study the disease. We collected blood samples and the results were mind boggling. The animals were found to be suffering from a host of diseases apart from trypanosomosis, including piroplasmosis, equine herpesvirus and Japanese encephalitis.

Using this information, I was able to help our vets tackle these diseases, thereby improving the health of large groups of animals. I also presented our findings at international conferences, which led me to delve further into the scientific knowledge and use an evidence-based approach to treating and managing clinical cases.

It was a natural path into research and when I was offered the chance to become ‘team leader research’ for the charity, I grabbed it.

Understanding the nuances of research took me some time and I value the mentoring and support provided by UK research advisers Polly Compston, Melissa Upjohn and Ruth Jobling.

"Research is enlightening and sometimes frustrating, but the experience has broadened my knowledge"

Research is enlightening and sometimes frustrating, but the experience has broadened my knowledge and allowed me to explore areas I am interested in.

So far, I have completed three research projects.

The first involved mapping the prevalence of heat stress in equids working in brick-kilns; the second explored barriers to improving farriery services; and the last was on the interactions between working equine animals and women, which is poorly understood in India.

Presenting my findings has given me the opportunity to travel. In the UK, for example, I presented a paper in the House of Commons entitled, ‘Who builds south Asia: the brick-kiln industry and its hidden workers’; it was a great honour.

As with all journeys, my research path has had its ups and downs, but I love what I’m doing.

My roles with Brooke have helped me to identify areas that need research. And working for a charity makes it essential to optimise our resources to make sure that our research is useful.

Research strengthens our equine healthcare system, offering sustainability and long-term benefits to large populations of equids and the communities who rely on them.