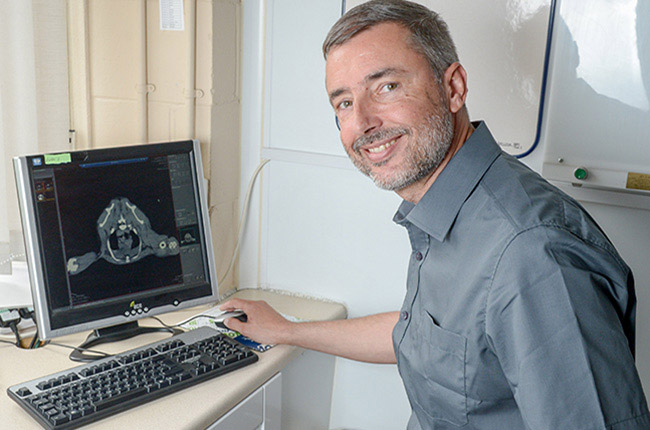 I did not have a career plan as such. I thought I would become a small animal practitioner and had the desire to acquire skills in small animal surgery. However, I decided to get my doctorate first, before going into practice.

Overall in my career, I have mainly made decisions and chosen jobs based on their location and where I wanted to live, rather than on the job itself. Deciding to obtain my doctorate while working for a pharmaceutical company in Basle rather than staying at the University of Bern where I had studied is an example of this.

As a student, I used to help on Saturdays in a local small animal practice close to where I lived. The vet there had worked at the vet school in Bern and specialised in internal medicine. He thought that offering me some training in surgery would be more profitable for the practice, as it meant the practice would avoid having to refer a large number of cases. He was the one who planted the seed and made me want to specialise in small animal surgery.

Describe your route into specialisation

One year later, I obtained a position as an “assistant” (equivalent to an intern) at the University of Zurich. I was very fortunate that competition to obtain internships and residencies was much less intense than it is nowadays.

"Training to become a specialist is a personal commitment"

How long did it take you to become a specialist?

I spent four years at the University of Zurich (a one-year internship and a three-year residency), which was the training required to sit the exam to obtain the diploma of the ECVS.

Training to become a specialist is, of course, a personal commitment. This included nights or weekends on duty in the clinic or on call, not to mention the countless hours of time spent studying.

Points are earned by attending international conferences, publishing research papers, speaking at conferences, giving CPD and/or being a member of one of the committees of the ECVS.

Tell us about academia and practice

When I became a specialist, I was convinced that I would enjoy academia most since it offers the combination of clinical work, teaching and research. This was also the reason why I decided to do a PhD at Utrecht University.

However, as I completed my PhD research project, I also realised I did not enjoy research as much as I thought I might, and I found teaching students could be repetitive.

It became obvious to me that what I enjoyed the most was making pets better and seeing the satisfaction of owners when I have been able to make a difference to their lives. At that point, I decided working in a private referral centre would be more suited to me.

Working as a specialist can present various challenges to a good work-life balance. One of them is trying to leave work not too late at the end of the day.

I have found that being well organised and using my time efficiently can mitigate the negative effects of busy days, so I do not feel that I am working until late too often.

All specialists at SVS work a four-day week, which is great for work-life balance and makes it easier to cope with longer days at work.

I’m also good at switching off once I get home and not thinking about patient-related or work-related issues in my free time, even though this has got more difficult as my responsibilities as a clinical director have increased.

The aspect of work-life balance I have probably found most challenging is the on-call duty at weekends and the way in which this restricts my ability to make plans, even if my out-of-hour shifts are not too busy.