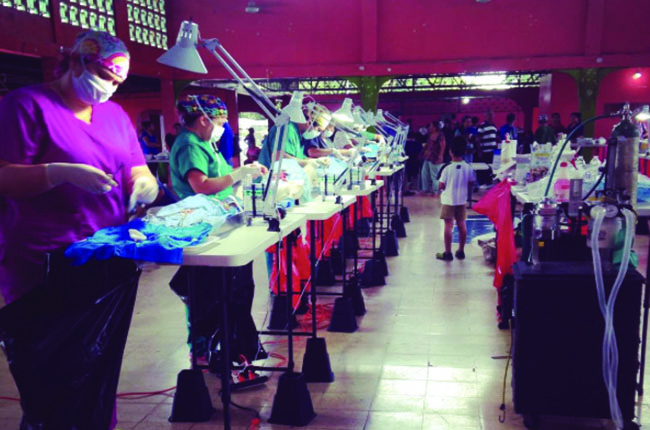 Kitty Ennett is a final-year student at Nottingham. Last autumn – in search of some EMS in better weather than the UK could offer – she volunteered with Spay Panama and gained experience of neutering cats and dogs

After finding Spay Panama on the BVA's overseas contact list, I headed to Central America to spend two weeks volunteering with this US charity. Getting hands-on experience of neutering was invaluable and it was even better knowing I was helping address pet overpopulation in the country. Spay Panama was founded 14 years ago and while I was there it hit a landmark figure, neutering its 100,000th animal.

What struck me first about Panama city was the humidity. The second thing I noticed was how friendly the people were. I was greeted at the airport with a kiss on the cheek and then driven to Spay Panama's centre.

During the first week, I helped with pre- and postoperative routines at the centre. This included using a tattoo gun to mark an ‘S’ on dogs' ears so that they didn't end up being brought in again for spaying; cats had a little slice of pinna removed, which served the same purpose. Every time I splashed a bit of tattoo ink on my hand I had visions of permanently tattooed dots on my hands and laser removals costing thousands of pounds. Of course, it never came to that, and by the fifth dog I was marking my Ss with artistic flair.

Lunch was a great way to learn about real local food, with plantain and corn being cooked in a new way every day. By the end of my trip, rice and peas had almost become a way of life for me, as did communicating in Spanglish. Arriving with only around two Spanish phrases wasn't entirely helpful but, little by little, I got to grips with the basics of the language.

The second week involved gathering together as many volunteers and as much equipment as would fit on the ‘sterilisation bus’, and travelling to communities in the countryside.We would typically spend two days and two nights in each community, holding an event where people could bring their cat or dog for neutering. These events were held in schools, community centres and even basketball courts.

The service was not free. A donation was required for the procedures; however, many of the communities were poor, so not all donations were monetary. Many people brought food, which explained the small mountain of plantain that I came across on the first day (I had assumed someone was really craving plantain). Ensuring that everyone made a donation to the charity – in whatever form they could – served to relay to communities that the service had real value. It also demonstrated that Spay Panama promotes responsible pet ownership, and that neutering family pets was part and parcel of owning an animal.

Over the course of the second week, I was at the ‘castration station’. Puppies and kittens were brought over to my table having been anaesthetised and it was my job to neuter them. The vets at Spay Panama taught me a new way to do open castrations. After six days, I had castrated 78 animals. The vets that do the ovariohysterectomies use the quick spay method, which is taught to veterinary surgeons who volunteer with the charity.

It was an interesting trip in that it also led me to consider the pros and cons of early neutering. I concluded that it was easier to worry about the potential negative consequences of early neutering in the UK where we don't have tick-ridden, emaciated stray animals wandering our streets.

The youngest animal I neutered was a three-week-old kitten, and I had no qualms in doing so as it could be a year before the charity returned to the area. Had he not been neutered, how many kittens could he have sired in a year? Who would have homed and fed his offspring?

Although volunteering with Spay Panama was hard work, it also involved a lot of fun, laughter and camaraderie. I made some amazing new friends, had dinner overlooking the Panama Canal, got sunburnt wandering along the Cinta Costera, and cuddled a lot of cats. It was an unforgettable trip, and I hope to return to Panama again to volunteer.

▪ Kitty's article was first published in the spring 2016 issue of the Journal of the Association of Veterinary Students.