A global career in the livestock industry 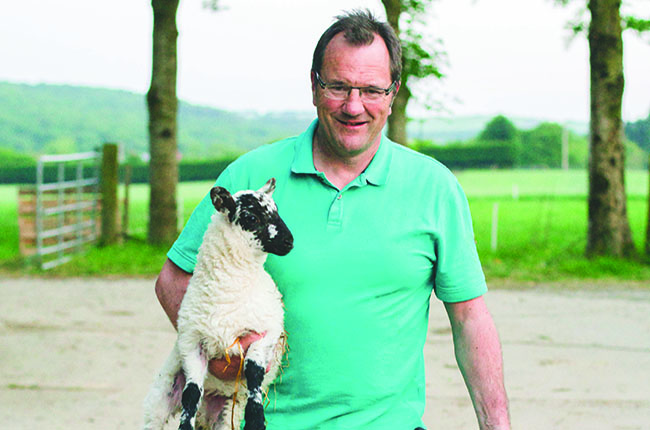 I qualified from Bristol university in 1988 and, although I went through a number of crises in the undergraduate years (which many of us do – ‘do I really want to be a vet?’), I had, by the time I graduated, developed an interest in farm animal medicine and farming.

This, in part, came from Jim Pinsent who many Bristol graduates will remember with fondness, and partly from seeing practice with enthusiastic dairy and pig vets. As a result I applied for and got a job at Gould and Partners in Southampton, a practice that serviced the cows, dairies, piggeries and horses around the New Forest and beyond. I had, however, always wanted to find a way of spending 3 or 4 years in Africa. I was fortunate enough to marry Scarlett, who had the same intention, and we started looking for opportunities to achieve this together.

A move to South Africa

Eventually, Scarlett got a job with Scripture Union in Pretoria and I landed a position as clinical assistant for production animals at MEDUNSA (the Medical University of Southern Africa – now part of the University of Limpopo). At the time, it was a product of the apartheid education system and only African undergraduates were enrolled. In addition, part of the mission of the university was to serve the surrounding African communities, including African farmers and livestock owners. We were there for just over 3 years, from the release of Nelson Mandela to the first elections – a simply enthralling time both politically and academically. I completed a master's degree in bovine medicine and worked on the epidemiology of tick infection and tick borne diseases in communally grazed areas in southern Africa.

Back to the UK

In 1994 we returned to the UK and I joined Elanco Animal Health as a veterinary adviser supporting Elanco's pig and cattle products. I was soon was asked to learn something about poultry medicine and work with Elanco's anticoccidial portfolio, servicing the broiler industry. I have been with Elanco ever since and have had the good fortune of being able to experience a number of different roles from technical support, marketing and sales management, general/commercial management, regulatory and research and development and, more recently, corporate and government affairs.

As a family we have also had the opportunity to live in the UK, Indianapolis, Vienna and now Ireland. Significantly for me and for many of us in Elanco, I have been with the company through a period of enormous change where we have more than quadrupled in size in 10 years – partly through organic growth and new products, and partly through acquisition and diversification into companion animals, vaccines, enzymes and aquaculture. Essentially I have, and almost certainly will, spend most of my working life in the animal health industry, so it seems worth reflecting a little on what has been good, and what maybe I have missed.

I have missed direct contact with animals and farmers but have get over this by keeping two large ridgeback dogs, one of which we bred, and by having my own commercial sheep flock of four ewes that we have lambed each year. The devastating news this year is that the ram we borrowed was firing blanks so there will be no lambs, but there is always another year.

On a more serious note, there has been a lot that has been interesting and energising about working in a global company.

First, I have enjoyed gaining an in depth understanding of certain disease syndromes and pathogens in selected species – this tends to be what happens to veterinarians in industry. For me it has been coccidiosis and Eimeria species, Clostridium perfringens and necrotic enteritis in broilers, Lawsonia intracellularis and ileitis in pigs, the Mycoplasma species in broilers and turkeys, and mastitis and the mastitis pathogens in dairy cows.

Second, I have really enjoyed learning and participating in the entire development process for medicines – from discovery, to early ‘proof of concept’ work (does it work, is it safe and can it be made?), to development (enormous studies that are designed to satisfy the regulatory authorities that the product is indeed safe and efficacious and that the manufacturing process is reliable), to regulatory approval. I was involved in one new product that cost $50 million over seven years to develop and the regulatory submission consisted of 200,000 pages of information. We then had to answer questions from the regulatory authority that required a further 2000-page submission!

The other area that has been fascinating to me as a biologist, rather than a chemist or an engineer, is the scientific complexity and difficulty associated with the development of large-scale manufacturing processes for new molecules, vaccines or proteins, and then the ongoing quality processes required to make the same products time and again to the same standards in large quantities.

Lastly, I consider it a privilege to have been part of the global livestock industry and to have worked with and supported Elanco's customers (veterinarians and producers) who produce livestock in order to help feed a growing global population. The scale of the task is significant: for example, in the UK alone, one chicken is consumed per four people every week, which means we need to produce about 18 million broilers per week and that is before we consider the great, increasingly urbanised countries and cities of the world – Shanghai (26 million people), Lagos (24 Million), etc.

Concurrently, livestock products contribute to healthy diets and they need to be safe and affordable. I was struck by a recent statistic published by the European Parliament that 41 million people in Europe are ‘seriously materially deprived’ and that that included being unable to afford a meal involving meat, chicken, fish or vegetarian equivalent every second day (The Parliament magazine). At the same time, it is clear that the world cannot simply increase the use of land and water to feed itself in order to meet the needs of the forecast growth in population. This means for the livestock industries that global animal numbers cannot be allowed to increase and we have to find ways of doing more with less.

Simultaneously, there is the imperative of animal welfare and, like many of those who may be reading this article, I took an oath on animal welfare when I joined the RCVS and we must support animal welfare through this great challenge. My current role in Elanco is to work in a team of professionals (several of whom are also veterinarians) that communicates with governments and food companies in Asia, Europe, the Middle East and Africa, to ensure that science-based policies are in place, which enable our customers to use medicines and technology that help them sustainably and safely (both for animals and humans) provide food for a growing global population.

I would recommend a veterinary science degree to anybody with an interest in the biological sciences and a passion for animals. It provides an incredibly diverse range of options and I am very grateful for all the opportunities that the profession has given me. I did manage to persuade one of my sons of this and he is currently in his fourth year at Bristol university, toiling now but looking forward to the future.