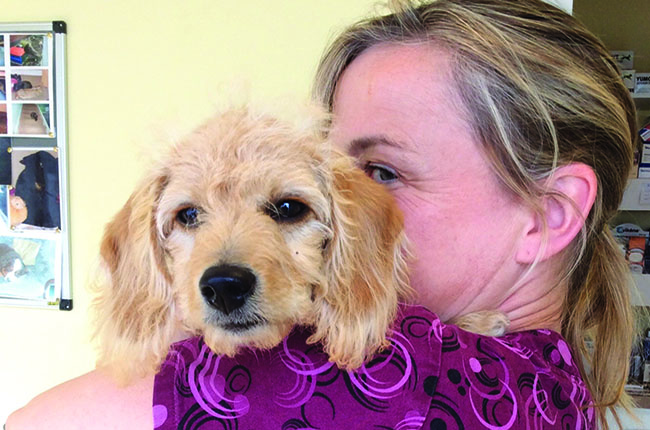 I never really saw myself as a general practitioner with my own surgery, but twists and turns have led me along a very fulfilling path. At Bristol university I found I enjoyed learning and I thought that maybe I'd go back into the university system to teach. With that in mind I took an intercalated zoology degree, thinking a good degree would set me up for a PhD and further studies. I loved the zoology year, the ability to choose courses that I was interested in and to be able to pick any viewpoint that I could argue, so long as I could back it up with research. After three years of heavy memory-based learning it was very appealing. I won't lie, the time for extracurricular activities was welcome too; my love of dancing still continues.

However, I admired the interns and lecturers at vet school who had actually worked in practice. I felt they had a more useful and realistic viewpoint, so I planned to do at least two years in general practice. In those days, jobs in mixed practice were relatively common so that seemed an ideal starting point to see where my interests really lay. I was lucky enough to get a job by the seaside in Christchurch, Dorset. How times have changed! I was given the job because I was the best female applicant and the other four vets in the practice were male, even though they didn't really want a new graduate. There isn't much rarity value in being a female vet these days!

Despite their not wanting someone straight from university, I was lucky to find myself in a supportive practice with superb nurses. The two head nurses were able to get any vein that I was struggling to find, they taught me to extract teeth, and I was lucky to do minor ops or cat castrates (nurses were still routinely performing these procedures then). I've got to admit I was hugely stressed to start with – worrying that I was missing a foreign body in every vomiting dog, working out dosages correctly, and how to get through the next open surgery. Every night that I was on duty I worried about what I might be called to, especially where the cattle work was involved. I regularly rang my then boyfriend, who had a much greater interest in cows, for advice before I left home.

"I never really saw myself as a general practitioner with my own surgery, but twists and turns have led me along a very fulfilling path"

My personal nightmare was a prolapsed bovine uterus. At a petite five feet tall, I wasn't sure how I'd manage and whether I could appear confident at the same time. Sure enough, I got the dreaded call within my first few months, on a cold, dark, winter morning. On the pretext of getting more drugs from the car, I refreshed myself on the epidural procedure – which I managed successfully, much to my inner relief – and slowly, slowly I replaced the heavy uterus by tractor headlight. At this point the fireworks were going off in my head and champagne corks popping. Having been brought up on James Herriot, I was expecting – at the least – to be offered a cup of tea, maybe even with a bacon and piccalilli sandwich. But no, the farmer pointed to a cold, outside tap for me to clean up, said thanks and walked away. On another occasion I turned up at a small farm where the experienced farmer had been unable to calve a cow. I could see his disappointment as I got out of my car, probably not helped by the fact that, although I was 25, I could have passed for someone much younger. I got out my ropes and jack, and after a bit of repositioning and checking I was able to get the calf out alive, I did it! In fact, I had more of a problem holding it up to clear its mouth and nose. Again, I was patting myself on the back and, after his obvious unhappiness at me having been sent out, was hoping for a ‘thank you’ or a ‘well done’ from the farmer, but he just looked at me, pointed at the jack and said: ‘How much is one of them?’

What I did discover in my first few years was that I liked dealing with the general public because I am a people person. I also learned that some clients – often the ones who seemed to be the hardest work at first – become your most loyal clients. I first realised this when I complained that a client who I thought didn't like me, because they questioned everything I said, had been booked in to see me. Our receptionist laughed and told me that they had requested me specifically.

When I left to take time out to go travelling with a friend, locum work seemed the best way to earn money between adventures, and it was a great time to expand my knowledge and to see how many different types of practice there were. I had decided to give up large animal work, because I hadn't done that much of it, and didn't feel I was as competent with farm animals as I was with small animals and horses. My decision was compounded by the changes that BSE was bringing about. The smaller farms were closing and my last calving had ended with a dead male calf and the farmhand had shrugged sadly and said: ‘Well, we'd just have had to shoot it’. To me that was the final straw.

"Locum work forced me to be innovative and grow in confidence...I really recommend locuming to anyone a few years into their career"

Locum work forced me to be innovative and grow in confidence: in some practices there weren't many drugs available, while in others my two-and-a-half years in practice made me the most experienced vet around. I remember asking one practice manager why, as a locum, I had been asked to deal with an awkward client who was complaining about an operation I hadn't even been present for, and they said they felt I was best equipped to deal with it as the owner was away. I also learned lots of little tips, some of which have stayed with me over the years. I really recommend locuming to anyone a few years into their career.

At this point I was still meeting up regularly with friends from my year, and I remember a possibly slightly inebriated conversation about future plans. Many of our year had started down the academic route already, and, talking to Steve Tasker, who is now a partner at Watkins and Tasker, we decided some of us needed to stay in general practice, and that we seemed best for the job!

A planned one-week locum job in a small animal practice in the lovely town of Warwick turned into a summer job, and by the next summer I had a full-time job in a busy four-branch practice. For me, I was happier being able to build a relationship with my clients and their pets, and I still find this the most rewarding aspect of my job. Staying in one town means I have seen many clients through the cycles of pet owning, through the accident-prone younger years to the degenerating older years. I particularly love being able to help keep quality of life up during the golden years, and allowing people more time with beloved pets – to me, that is supremely satisfying.

As I moved practices I found I was comfortable with being in sole charge and building up my own client base. I felt ready for new challenges after many years as a first-opinion vet. The aforementioned Steve Tasker and his wife Séverine were instrumental in my next role, volunteering for the congress committee of the British Small Animal Veterinary Association (BSAVA). It would be more accurate to say that I was invited by Steve to come along to a meeting, without realising that he was putting me up to follow him in the role of exhibition chair. After I got over my surprise, I really enjoyed seeing the other side of the congress exhibition: all the work by the BSAVA staff at Woodrow House, and the amazing build-up in the National Indoor Arena in Birmingham (now the Barclaycard Arena) from a basic arena to the rows of shell-scheme and inventive stands that make up the exhibition. From the stand planning, the passing of the company's proposals, the rigging meeting to the final product – so much work is put in by staff and volunteers to make it bigger and better each year. I found it fascinating to see the profession and the event from the viewpoint of a company, and enjoyed making new contacts. Surprisingly, for someone who had often attended BSAVA's congress and loves to dance, I had never attended any of the social events, always choosing to meet up with friends instead. So I was amazed to find how lavish the black tie dinner is – it's the only banquet I know where you have a choice of dishes and the food is exceptional. I couldn't believe I'd been missing the party nights too; a chance to dance your socks off to live music with a great group of friends. I'm loving the latest VetFest version.

Setting up in practice

My latest challenge as a vet has been setting up my own practice with a partner, Mary Martin. As we took over an old shop we had to become experts in everything; there were so many decisions. We were lucky to find good advice and good builders, but we were literally involved from drawing the first plans on squared paper, through to choosing where every socket would go. Then we had to research everything from telephone systems to practice management systems, from our pristine operating table and lifting table, through scrub sink and right down to bins and files – all the while watching eBay for bargains, which saved us a fortune. When we couldn't find a logo we liked I resorted to drawing one, which is no mean feat for an art class reject. We learned how to populate our new website, how to run a Facebook page, and how to tweet. We learned the best resources for a health and safety file, and what needed to be included in a contract. Forums such as the startup forum and SPVS have been useful. But right from our first open day we realised that word of mouth is the best advertisement to gain new clients. 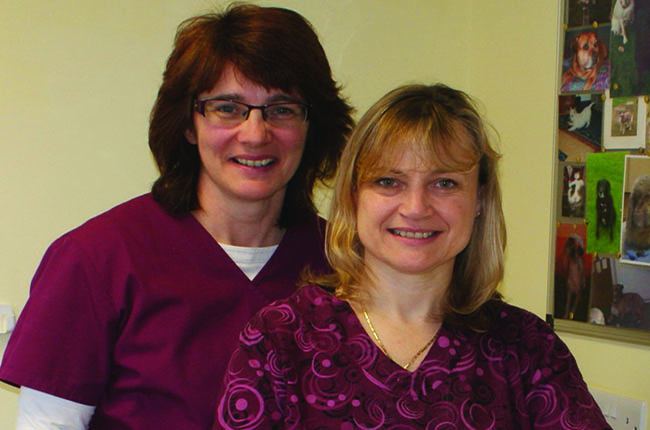 Setting up practice has been hard work for Mary and Paula, but good advice and good builders have been the key to success

We have been lucky to employ great staff, but have had the challenge of balancing quick growth with a need to watch the wage bill, and this led us into nurse training with placements from our local Warwickshire College.

We are about to celebrate our third birthday, and we have 10 members of staff already, including part timers and students, which is more than we ever expected. Just over two thousand clients is as quick a growth as we can manage and still deliver a level of service we can be proud of. It hasn't always been plain sailing but we are very happy with our decision to start up – it has been very rewarding and allows us to work in the environment we want to and, hopefully, when we look to retire it will have been a good investment too.

Working and living in the same small town might not be for everyone, but I really enjoy being ‘Paula the vet’ and not being able to go shopping or for a meal without having a conversation with clients. My husband has got used to our slow, chatty progress around town; we are happy to feel part of the community.