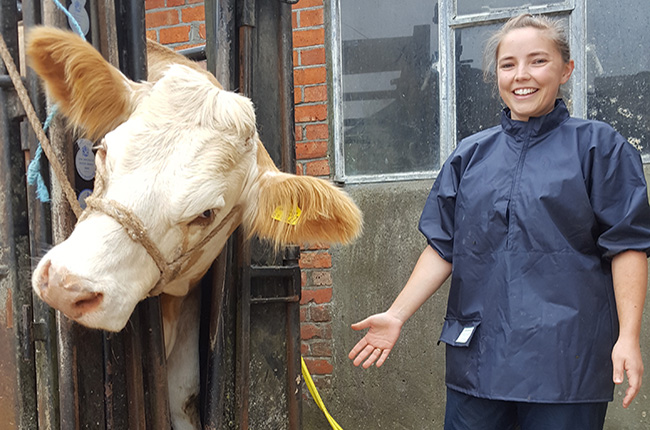 During her fourth-year studying veterinary medicine at Liverpool vet school, Rosie Perrett contributed a number of diary entries to try and give people a picture of what it's like to be a vet student.

The start of my summer break was packed with placements – equine, farm, small animal and public health too. During these, I encountered every weather system possible, from a heatwave to winter weather – all in June.

Placements began with two weeks’ equine practice with my own vet, who helped treat and manage my old horse’s respiratory problem. I already knew he would be great vet to work with.

I organised the two weeks during the principle breeding season for horses and improved my reproductive and breeding knowledge. The experience involved lots of rectal examinations, ultrasound and artificial insemination. One thing I hadn’t appreciated was the amount of driving involved in routine first-opinion equine practice, and in all honesty it has made me reconsider becoming an equine vet. However, the emergency, breeding and lameness work-ups I found interesting, so, who knows?

I spent the heatwave in waterproofs at a local farm animal practice. I had never really considered being a farm animal vet – the only contact I’d had with sheep and cows involved my vet school placements. I was pleasantly surprised at how much I enjoyed routine dairy work, and now definitely consider it as one of my options. I had several ‘light bulb’ moments when rectalling dairy cows, as I started to understand and recognise reproductive structures that are essential in pregnancy diagnosis.

"Basic concepts seem a lot easier, and my understanding of topics is becoming second nature"

My ‘public health’ placement was at a local farm shop with onsite butcher and abattoir. It was truly invaluable as I saw the whole package, cow in field to burgers on the shelves all in one week. The abattoir provided me with great insight into what happens and was humbling.

My other week was spent at Heathrow’s border control inspection point as part of ‘disease surveillance’. There is lots of legislation involved and despite being not very ‘hands-on’ it’s still a veterinary option. I also now feel confident that I know the requirements for animals entering the country.

My final two weeks in small animal practice gave me the chance to do my first cat castrate and spay, and my second dog castrate. Overall, I was pleased with myself, even if my incision for the cat spay did go slightly wonky.

I was hitting the cephalic and jugular veins first time and gained confidence in basic clinical skills, such as intubating for anaesthesia as well as improving my pharmacology.

Lectures are over: it’s official! I have finally started rotations and getting on with the good stuff – hands-on experience and caring for animals – after all, this is what it’s all about.

Being at Liverpool vet school, I’m now based in Neston, on the Wirral peninsula, which is back in the countryside where I feel I belong. (I’m not a city girl.) Our final lectures are at Leahurst, home of the university’s small animal teaching hospital, the Philip Leverhulme Equine Hospital and the university’s farm animal practice.

Full days were tough, not only because of the lack of stimulation (other than the lectures), but also staying focused on complex topics such as cardiology or neurology. 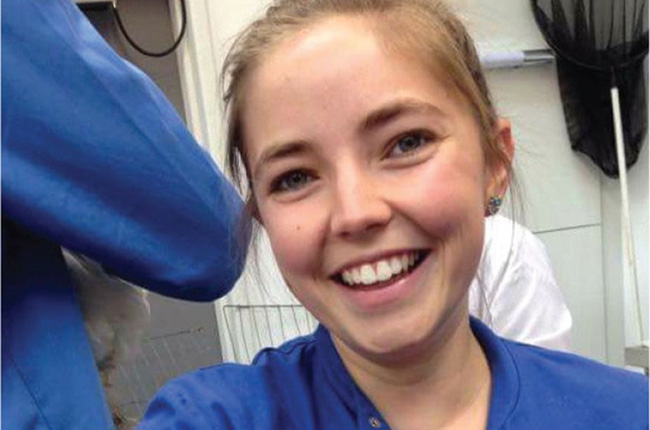 This year’s subjects are separated into major animal groups – farm animal (and public health), small animal (cats and dogs) and equine. They are organised like this because our exams are presented in much the same way.

We’ve built on topics from previous years, as well as covering a few new topics, including pigs, exotics and oncology.

The information is slowly coming together. Anatomy and physiology from first year links up with pharmacology from second year, leading into clinical application from third year. This year is about tying everything together.

During my time revising, I’m pleased to say that basic concepts seem a lot easier, and my understanding of topics is becoming second nature. Despite that, I think I’ll be learning for a long time to come. In the meantime, I’m keeping my fingers crossed that the fourth-year exams include some nice questions.

I recently did my first farm animal rotation. I didn’t really know what to expect but presumed that I would have the life of a cow in my hands and I would have to fix it. This wasn’t the case at all.

First, I learned about herd health – actually, population medicine – and discovered that most days were spent indoors looking at a laptop. I was given farm data to analyse, to work out what farmers were doing right and where improvements could be made and, in some instances, I presented my suggestions to the farmer. Being a maths nerd, I liked looking at the numbers, and there were lots of them to consider – body condition scores, lameness scores, fertility data, nutritional data, cow comfort quotients and youngstock data. Overall, it was a rewarding couple of weeks, especially when the farmer seemed willing to implement some changes we suggested about his cattle housing.

"It was a rewarding couple of weeks, especially when the farmer seemed willing to implement some changes we suggested about his cattle housing"

The next two weeks were spent more actively involved with animal handling and clinical skills. I got to grips with learning how to do disbudding and injecting local anaesthetic to desensitise the area. Other tasks involved blood sampling (which takes practice), suturing techniques, foot trimming and biosecurity protocols, to name just a few. I now feel much more confident about large animal practice.

I then completed two weeks of equine EMS at my local practice at home in Dorset. This placement has been one of my favourites so far. This time it was the middle of the breeding season and I got to handle several adorable foals.

My six-week rotation in the Small Animal Teaching Hospital began with butterflies – in my stomach. Interacting with clients and their pets was a completely new experience and I didn’t want to look stupid.

I soon found myself taking histories, doing clinical examinations and then relaying my findings to a clinician before considering the differential diagnoses. Until then, all the cases I’d seen had been in lectures with no opportunity to get hands-on. This was the real deal.

In the hospital, we got experience of dealing with in-patients and responsibility for day cases. This meant completing checks, feeding, following animals through any necessary diagnostic tests and discussing cases with the clinician in charge.

Consultations last one hour and, having being introduced by the clinician, it was just me and the client. I’m still vaguely embarrassed about my first one – it felt all over the place and my hands were clammy. However, the more I did, the more I found my own routine and by the end of the six weeks, I was really happy interacting with people and their animals.

"Rotations are helping me find answers to the questions, ‘where do I want to work and what do I want to do?'"

Following the fast pace of the hospital, the next two weeks at a behavioural referral centre in Chester were less frenetic. The experience was truly eye-opening; I thought I’d learnt a lot about dogs but watching a professional point out the intricacies and nuances of canine behaviour, I realised that our lectures only scratch the surface of this subject. I witnessed consultations involving a variety of breeds with diverse problems, ranging from ‘aggression’ (dog-to-dog or dog-to-human) to separation anxiety.

I was surprised to see the huge impact that chronic pain has on canine behaviour, the signs of which are frequently missed. On reflection, of course, it’s the same for us. If we’re feeling unwell or sore, we get grumpy and grouchy, so why should dogs be different? I learnt many options for alleviating chronic pain and aim to get better at spotting it.

Spending two weeks at the PDSA provided another perspective of small animal practice – the charity sector. It’s a completely different way of working and a vital service for pets whose owners struggle to afford the cost of treatment at a private practice.

With months rather than years until graduation, rotations are helping me find answers to the questions, ‘where do I want to work and what do I want to do?’

Along with the ecstasy of being this close to finals comes the realisation that I have one hell of a reality check ahead, as my full-time education ends after 21 years. It’s for that reason that I’ve decided to take six months out before finding a job, because there might not be an easy opportunity to do so once I’m working and have my own place.