Working as an equine vet at the Rio Olympics 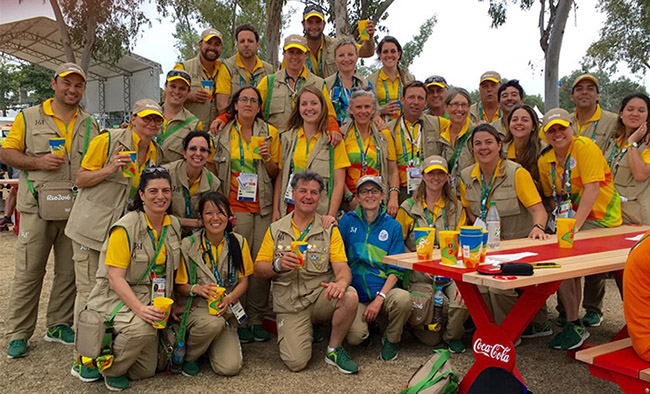 “Experience is what you get, just after you need it” is an expression, which certainly applies to the Olympic Games. It is particularly true for the equine events, where the host nation has to provide facilities for the 3 equine Olympic and Paralympic disciplines, namely eventing, dressage and show jumping.

Sometimes it is possible to utilise existing facilities. This was the case in Rio compared to the temporary venue in London’s Greenwich Park in 2012. The Olympic Equestrian Centre at Rio had been developed for the 2007 Pan-Am American Games. It was then modernised and expanded for Rio2016 to provide an excellent equine competition site.

To help surmount the challenges of running such a massive sporting event, a test event is held the year before to iron out as many wrinkles as possible. Also many people from different parts of the horse world are recruited as officials, workforce and volunteers to run the show, a large number of whom will have worked at other major equestrian events previously, with some on their fourth or fifth Olympic Games.

This is where I was fortunate to be involved. I had previously worked at both the 2012 and 2008 Olympic and Paralympic equestrian events, so I was lucky enough to be accepted as a volunteer clinic vet for the recent Rio Games, along with another colleague from Bell Equine, Edd Knowles. It was a privilege and an honour to be a very small part of this big event.

My role started before I left the UK, when I was involved in checking the first planeload of 34 horses heading to Brazil from Stansted Airport. When I arrived at the small Border Inspection Post at the end of the main runway, it certainly seemed an incongruous place to find many top quality horses waiting to board. There was real excitement as it signified that the games were about to start. There was also a mass of media present, all of whom I failed to recognise… a gold medal level social error on my part.

I then followed the horses on the lengthy 11-hour plus flight to Brazil. Within 24 hours, I was accredited, uniformed and reunited with the horses at the Olympic Equestrian venue at Deodoro. The Equestrian venue was part of a very large military zone outside central Rio de Janeiro. Within this military area 5 Olympic venues were situated. Consequently, we were well protected with armed soldiers positioned everywhere.

The equestrian complex was well planned and compact, with multiple arenas, an indoor school and lovely spacious airy stables, designed to stay cool, despite the sometimes very hot weather. There was a purpose built farrier’s forge and an excellent veterinary clinic with an equine operating theatre, imaging facilities, lab and several treatment boxes. This will remain in place as a legacy for the Brazilians to use after the Games. Thankfully it should be handed over barely used, as the vet clinic did not see much action during the Olympics.

The work of the international veterinary team 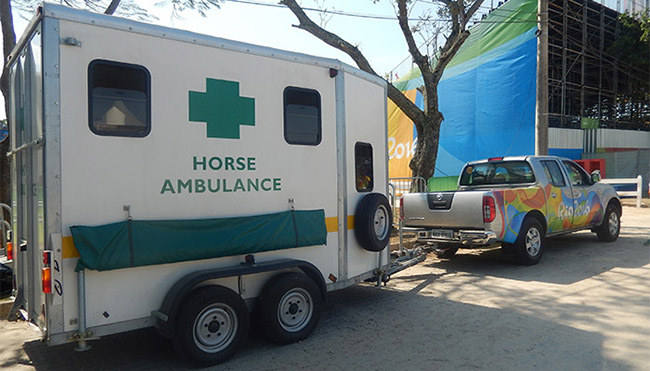 Once familiarised with the set-up, the day-to-day routine involved providing a vet support team at the side of every arena, whenever there were horses at exercise, as well as in the clinic, but also preparing for the cross-country phase of the eventing. This is the most complex aspect for the veterinary services, requiring vets positioned around the course. The whole clinic was run by the vet services manager (VSM), a Brazilian vet, Juliana de Freitas, however the cross country coordination was in the hands of GB vet, Jenny Hall, who had been VSM at London2012.

The vet team had been pulled together from all over the world, unlike the big events such as Badminton Horse Trials, which have a regular trusted team working together over many years. Consequently, several rehearsals were required to ensure everyone understood their roles and technology, particularly radios, worked. I am pleased to report that this went well, although it was the classic example of having experience after it is needed, which is always the way with these one-off occasions.

It helped that we had some incredibly talented horses and riders in all 3 disciplines. Michael Jung’s achievement of winning the individual Olympic Gold medal for eventing at both London and Rio, finishing both on his dressage score, is outstanding. Equally incredible was watching Charlotte Dujardin and Valegro’s performance in the dressage freestyle, which felt like history in the making. In the show jumping, it was comforting to have the individual gold medal won by a British rider who is older than the author!

Overall the equestrian medal table makes for interesting study. Germany reinforced their position as the equestrian powerhouse: 4 medals in London, 6 in Rio…WOW!  The French are the big risers with 2 team golds and a silver, yet TeamGB still has 2 of the best horses in the world.

Two Hearts: the intuitive bond between horse and rider

During the lead up to the Olympics and during competition itself, the Fédération Equestre Internationale's (FEI) #TwoHearts campaign really struck a chord, illustrating the closeness of horse and rider. With the help of social media, video clips, media coverage and live streaming of the event itself, I hope that this has been an inspiring Olympics, which will allow horse sport to continue therein. The expense and commitment required to stage eventing as compared to the relatively inexpensive dressage and showjumping competitions mean there may be recurrent questions asked as to its future viability within the Olympics. Another concern for Tokyo in 2020 will be the inevitable high temperatures in Japan's mid-summer. It would be a massive disappointment, if it were dropped from the Olympics. I really hope this does not happen. 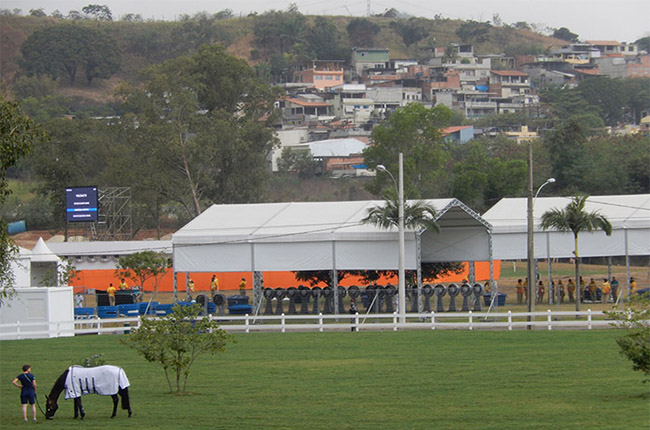 The equestrian complex included a number of spacious airy stables

Brazil was a great host nation, (described as perfectly imperfect by the BBC), in spite of Rio’s challenges, including massive poverty. This was only too apparent when driving past all the favelas (shanty towns) spread over the hillsides around the city. The Brazilian people were incredibly welcoming, helpful and friendly. The whole veterinary team and FEI delegation were great to work with, solving any equine-related problems in a proficient, but relaxed way. Also not all the horror stories in the press were true about the Olympics in Rio, some having been over exaggerated by one source or another!

I tried very hard to learn Portuguese in advance with language CDs in the car between calls and using the Rio Olympic on-line course, but it was frustratingly hard to communicate properly; even so, I enjoyed every moment. It was an amazing experience to have a small part in the team helping to look after elite horses at theRio2016 Olympics. Now it’s time to enjoy the Paralympics.

More on this topic