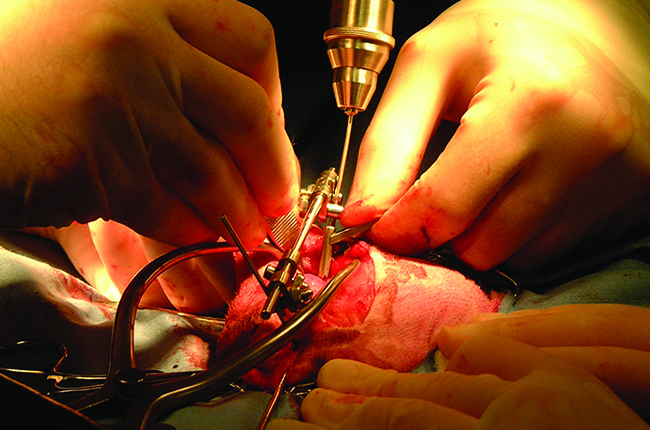 The problem in numbers

Of the 121 veterinarians registered as specialists by the Royal College of Veterinary Surgeons, only 3 women specify orthopaedics as their area of expertise, compared with 37 men. The advanced practitioner list has only 2 females and 34 males on the list, although this may be partially explained by the demise of the small animal orthopaedic certificate. The advanced practitioner list of small animal surgeons has 37 females compared with 96 men.

Of the 121 veterinarians registered as specialists by the RCVS, only 3 women specify orthopaedics as their area of expertise, compared with 37 men

In human health, orthopaedic surgery is the medical speciality with the lowest percentage of women. In 2015, in the USA, only 4% of board-certified orthopaedic surgeons were female. I recall going to a human orthopaedic meeting in London when I was a resident in 1995, and the presenter said: ‘Good evening gentlemen, oh, and lady’, as he spotted me in the audience.

Why are there less women specialising in orthopaedic surgery?

One reason for few women entering human orthopaedic surgery is the belief that it requires a considerable amount of upper body strength. It might take a few more hammer taps or two hands to tighten a screw, but efficient biomedical devices make strength much less of a prerequisite these days. Advances in technology have shifted the primary requisites from brute strength to manual dexterity, mechanical ability and an aptitude in three-dimensional visualisation.

Additionally, we do not have this same challenge in small animal veterinary orthopaedics as our patients are generally smaller, although there is the occasional giant breed dog that might weigh more than the surgeon.

In human orthopaedic surgery there has been, and still is, a lack of female role models to inspire medical students to take up this area of specialisation.

My early role models in veterinary orthopaedics were the surgeons who taught and inspired me at vet school. The fact that they were all male did not dissuade me – the challenge of breaking into a previously male-dominated domain was perhaps an incentive to achieve in this area; ultimately, orthopaedic surgery was what I wanted to do.

Female role models in veterinary orthopaedics include Gretchen Flo, Ann Johnson, Uli Matis and Bernadette Van Ryssen. Gretchen Flo co-authored one of the most comprehensive orthopaedic textbooks used by students and specialists alike and has published widely on cranial cruciate ligament surgery. The so-called ‘Flo technique’ is one of the most widely used techniques for stabilisation of the cranial cruciate ligament deficient stifle in the world.

Ann Johnson was one of the few female speakers on the AO Foundation courses. She co-authored a very practical orthopaedic atlas of surgical techniques and published some landmark papers on external skeletal fixation and growth plate fractures.

Uli Matis, now retired, has been an inspirational, productive and tireless small animal orthopaedic surgeon based in Munich and has been heavily involved in organising the biannual and European Society of Veterinary Orthopaedics and Traumatology meetings for many years. She has also published widely on feline orthopaedic conditions.

Bernadette Van Ryssen is probably one of the most experienced veterinary arthroscopists in the world and was a speaker on one, if not the first, practical arthroscopy course.

I am certain that the number of female specialists will continue to increase as more women enter our profession. In the UK, we are lucky to have some current female role models in veterinary orthopaedics to inspire our graduates; of course, there are many female veterinary specialists in other disciplines as well. They can be inspirational to veterinary students and new graduates demonstrating that they can progress in an area of specialisation.

Currently, most surgeons will have a diverse small animal orthopaedic caseload: a typical consulting list might include a dog with a one-year history of chronic lameness, an osteosarcoma in a Rottweiler, a dog with polyarthritis and an acute fracture in a kitten.

In veterinary orthopaedics, some sub-specialisation is possible, especially in the areas of rehabilitation and sports medicine, arthroscopy, rheumatology and joint replacement, among others. You do not necessarily have to spend all day wielding a power saw and operating on dogs with cranial cruciate ligament rupture, although that might be what attracts you to this discipline.

Even in areas of specialisation, it can be a challenge to keep up with the technology, equipment and procedures available.

If you want to be a specialist surgeon, it will involve making some sacrifices as well as financial input.
The traditional route is a one-year internship and a three-year residency, followed by some difficult examinations in order to become a European diplomate in small animal surgery. Becoming an advanced practitioner may not require such a commitment in terms of total focused time, but it will still take ambition, dedication and single-mindedness. The financial input for the training is usually going to be more than recompensed by what you can earn as a surgeon in a private practice.

Combining a career with family life and children

It is possible to take time out to have children, although most people plan to have children following the residency. Once you are working it can be difficult to combine bringing up children with being a surgeon. There is the inevitable operation that starts late or takes longer than you anticipate. The ticking clock towards school pick up time can make an already difficult procedure even more stressful. You need to have flexible childcare and be prepared to spend money on childcare, or have a partner who works more flexibly than you.