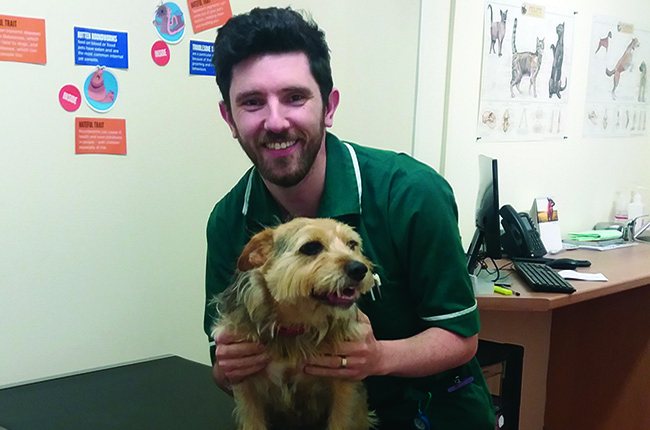 It feels like a long time ago that I began dating a vet student. After we had been together a few months, she suggested that veterinary nursing would be a good career for me. Until that point I hadn't realised that the job existed, but, as I had grown up with animals, what she said made sense.

Gaining an insight into veterinary nursing

I wrote to my local practice to ask if I could spend a day there to see what the job involved. Not only did I really enjoy the experience, but I learned so much too – I knew I wanted to do more. The first operation I saw was a cat castration. I had no idea that animals didn't close their eyes when under anaesthesia and that freaked me out more than the surgery did.

I was 23 years old when I decided to become a veterinary nurse. It took me a couple of months to sort out the logistics, including applying to colleges and getting a place at Telford College, Edinburgh. Meanwhile, I continued to volunteer at my local practice and felt on top of the world as I looked forward to my new career.

I had worked since the age of 16; part-time at Sainsburys while studying aquatic biosciences at university, and then as a security guard for a film and TV company at various locations around Glasgow. This was going to be a big change.

At my interview I met Brian May (no, not that one), a male VN who was on the interview panel. He told me years later that my answer to the question: ‘Why should we pick you over the other potential candidates?’, made me stand out from the rest of the candidates who had all said ‘I love animals’ or ‘I love working with animals’, etc.

My answer was: ‘I don't know, because I'm mad, mental, I'm me?’ Since then, I have told every student I have helped to train and every work experience student I have dealt with that they need to find a way to stand out at interview; this can be difficult to do when being asked routine questions.

My unusual answer got me a place at college and I started as a student VN. I'm the first to admit that I find learning difficult but, when it came to the practical aspects, I couldn't get enough of them.

During the course I moved to England to be with my girlfriend (she qualified in 2004). I got a job at a lovely practice in Yorkshire where I was one of only two males – the other being my boss. I learned that I was a rarity quite early on, but never really thought that a man shouldn't be a nurse and I hope I've managed to be a positive influence on some of the school students who have done work experience with us.

We married in 2010, and spent a couple of years in Yorkshire until we decided to move back home to Scotland to start a family. Initially, I joined Companion Care (Vets4Pets) and that was a great education in itself. The amount of exotic and small, furry experience I got was amazing – I got very good at sexing gerbils.

These days, my wife and I work at the same practice – an Independent Vetcare practice in Ayrshire. The Oaks Vets has four branches and the VNs rotate around the branches wherever we are needed.

Our RVNs have a range of roles including holding consultations on flea and worm treatment, giving nutritional advice, doing postoperative checks, and so on.

We additionally offer home visits: they are made by a vet and a VN and are usually for end-of-life care, but we do visit some clients who find it difficult to get out of the house.

My wife and I recently celebrated the arrival of our first baby, a daughter, who joins our family of dogs, cats and rabbits. She arrived the Monday after this year's BSAVA congress. After time off on parental leave, I'm back at work with a new perspective on the world.

Would I recommend this career? Yes, I would. Everyday I learn something new or see something that I've not seen before –what other job can give you that?