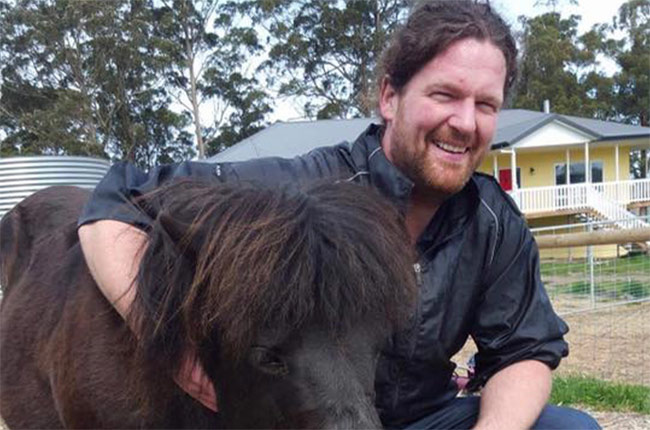 From my earliest memories, I always wanted to be a vet. I grew up on a mixed farm (horticulture, fruit farming and beef cattle) on the shores of Lough Neagh, in the orchard county of Armagh, Northern Ireland. The farm is surrounded by acres of wild Irish countryside and classified as an area of special scientific interest due to the range and diversity of native plants and wildlife.

Alongside our farm animals, we kept a menagerie of pets, from donkeys and ponies, to poultry and pond fish.

When vets arrived at our farm to tend to sick animals or deliver calves, I loved to watch or help where I could. To me, vets were superheroes, people who studied science and travelled around all day, treating animals and saving lives. I was inspired – I remember thinking it was what I wanted to do too.

My dad was a great storyteller and I used to love accompanying him to all the places where farmers would congregate and share stories, like the cattle mart canteen or the agricultural supply store. There would always be lots of laughter, no matter how bad the weather or the farming economy was, and I loved to hear their tales. As I grew up, qualified and started working as a mixed practice vet in Ireland and, later, in the southern hemisphere, I started to gather a few stories of my own.

'To me, vets were superheroes'

What are you doing now?

I returned to Ireland at Christmas last year (2019) after seven years of working in Australia. Since then I have been working on a part-time basis at a rural mixed animal practice.

We have a busy small animal department, with neutering, vaccinations, medical cases and occasionally more advanced soft tissue surgeries. In the farm animal department we are now busy with lambing and thankfully many of these cases are brought into our dedicated facilities.

I seem to have had quite a few very large lamb deliveries requiring caesarean section so far this spring.

On the other days of the week, I write and, I am delighted to say, I have recently published my first book.

When did you start writing?

About three years ago, I found myself in New Zealand with a few spare evenings while travelling and exploring. I had a story that I felt was worth sharing, so I sat down and started to write.

This story concerned a pet cow in Wicklow. Mamo, despite being around 35 years old, surprised an entire village by delivering a calf (with a bit of help from me). There was something of a whodunnit as to the paternity, the source of much laughter as a few local bulls were on the suspect list. The calf went on to grow into a very tall and the most docile bullock (a pet of course) and a real character too. I really enjoyed writing that story and when I shared it with some family members they responded looking for more.

Next up, I shared with them a story about a postman who went on holiday one spring and came back to discover his substitute had missed emptying a rural post box for the few weeks he was gone.

The postman came to me in a bit of a panic, as he had discovered the post box almost overflowing and had taken all the mail out, only to find a nest of young robins in the middle of it. The nest was beyond saving.

After that, under top-secret conditions, and with a bit of guidance from me, he went on to raise the chicks in a hat in the glove compartment of his van.

It was hard to keep a straight face when a few letters turned up at the practice with bird droppings on them! Even the receptionist joked about how the birds must be going in the post boxes – little did she know they were in the post van.

His dedication paid off, as he eventually fledged all five robins to his garden shed and then his garden.

After writing this story and sharing it, I just kept on writing more. I had more inspiration – the story of our childhood pet piglet that came from an indoor pig farm and how much she went on to adore outdoor living. Then some of my Aussie vet adventures, and so on.

'Vets enjoy hearing the funny things, the mishaps and the misheard things'

I have always had a tendency towards humour in my stories. One of my early readers suggested I should approach a magazine. I sent off the postman story above, to the magazine Ireland’s Own (a popular magazine in Ireland) and I kept my expectations low. Soon an email came back from the editor, asking for a series of animal stories monthly – and mentioned a payment. I was very shocked (and happy).

By that stage I had written quite a few veterinary short stories and from there I went on to serialise these monthly for the magazine. That was 14 months ago, and I have continued to contribute monthly ever since.

I also love to hear animal and vet stories myself. In my magazine series, readers are invited to send me their own tales and I have received some fantastic ones for my own enjoyment, from reports of a dog in rural Ireland that likes to attend funerals, to the story of a feral mouse that became a pet, and tales of amazing wildlife encounters – it has been a huge amount of fun.

While I have been writing, I have always worked as a vet, and it is likely that I always will. I love it.

I view my writing as a creative outlet – I always felt I had a storyteller in me, but I never seemed to have the time to sit down to write, until recently.

The reward is getting to share my stories and hearing a few more. I like to make people laugh and, while I am no comedian, I enjoy placing a few jokes within my stories. I think vets enjoy hearing the funny things, the mishaps and the misheard things that can arise in our work and make us laugh.

Some amazing things have happened along the way too. For example, Mamo’s calf was named after Michael D. Higgins (who had been appointed Ireland’s president a couple of days before the calf was delivered). Before publication, I decided to email his office. Then followed a request for the story and a very kind phone call from a representative saying the entire office had read and enjoyed it!

I have now published a number of stories from my work as a vet, and articles on my international travels, in magazines and newspapers.

I am delighted to say that on 14 March my debut book was published. It is called Whiskers, Feathers and Fur: Veterinary Tales. This is an illustrated, humorous collection of memoirs. In my free time I am part way through writing a second collection and also working on adapting some of these stories for children.

Any advice for budding vet writers?

I have no official training in writing. I reckon that means that if I can do it, anyone can give it a go. I hasten to add that I think the main challenge these days is finding the time.

Perhaps start with a short story or two and go from there. I highly recommend joining a local writing group. You may end up taking on some fiction writing challenges and then wondering when your veterinary experiences are going to be relevant, but this is all character building (excuse the pun) and growth.

When it comes to writing, I have to admit that having Temple Grandin read and give a positive review of my book was very special.

In my everyday work as a vet, I get great satisfaction from surgical cases. One in particular that stands out was an emergency nephrectomy that I did on a cat that had a bleeding tumour and was located hours away from any referral centre.

You can read about that one on my blog (https://austindonnellywrites.blog/) if you wish.