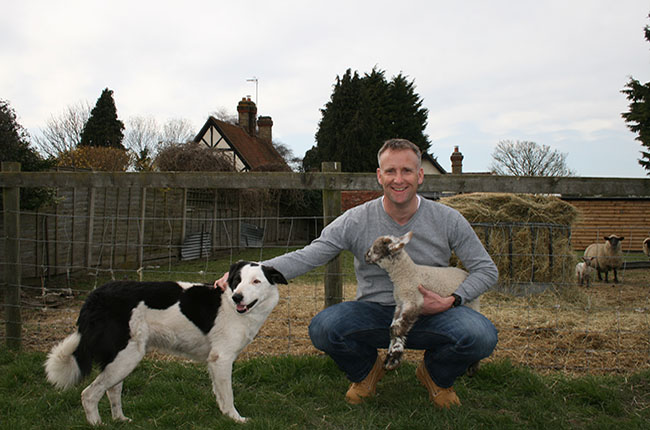 Growing up in the Netherlands

I grew up on a farm in the Netherlands and have always felt comfortable around animals. It was the veterinary surgeon who looked after our animals who sparked my own interest in becoming a vet. When I was a boy, I thought that driving around the countryside caring for animals and talking to people looked like good fun. As I grew older, I realised the profession could also offer opportunities to work away from home – possibly even to leave the Netherlands and work abroad.

When it comes to qualification, the Netherlands operates a numerus fixus (fixed number) system which enables some students to gain access to veterinary medicine, and others not. Unfortunately, it didn't work for me so I had to make my own way. I went to Ghent in Belgium and spent 6 good, but hard, years studying among the Flemish. Eventually, after qualifying in Belgium, I returned to the Netherlands for two-and-half years and worked in a three-vet mixed practice close to Rotterdam. It was a classic first job in which you make all your first mistakes while, fortunately, being well supported by the partners.

My first role in the UK was at a six-vet mixed practice in Carmarthenshire in Wales. I joined as an assistant in 2002. My English was rusty and this, combined with the complications of the Welsh language, frequent horizontal rain and my poor map reading skills, meant I ended up in many hilarious situations. 6 months after I joined, the partners invited me to become a partner and together we grew it into a 15-vet practice. I thoroughly enjoyed my time there and gained invaluable vet and managerial skills but, by the time we'd been in the UK for 12 years, it was my wife's turn to pursue her career. We sold our house and my stake in the partnership and moved to Buckinghamshire where she is the lead vet at Whipsnade Zoo.

Large animal medicine has always been my particular area of interest. Having been brought up on a farm, I can relate to farmers and I like the hustle and bustle of handling the large animals we work with. But, after Wales, I was unclear what to do next. As it happened, I had met Tim Davies, veterinary director at CVS, and he introduced me to the company. I joined in January 2014 as a regional director, responsible for a number of practices. However, it soon became clear that CVS had more in mind than just working with small animals and, in August 2014, I was appointed large animal director.

In this role, I am responsible for creating an infrastructure in which our large animal clinicians can practise effectively. I am also working to create a better understanding of the importance of large animal work within CVS as we move towards developing a stronger practice base in this area.

CVS's large animal division is still small compared to its small animal one, but it is growing quickly. In fact, 2015 saw significant growth as new colleagues joined us from Knox and Devlin in Derbyshire, Coast2Coast in Cornwall and Alnorthumbria in Northumberland.

We have also developed initiatives, such as MiFarmAudit, a system that enables our large animal veterinary surgeons to collect and store the disease data of a particular herd on our central farm management system. The collected data about several viral and bacterial infections will result in a health score per disease and ultimately per farm. Use of the data will enable our vets to plan optimal preventative health regimes to maximise the overall health of herds belonging to our farmer clients.

Perhaps the biggest challenge with my role is getting used to working with different teams in different places. When you are working in one place within one team, lines of communication are often short and straightforward and are not reliant on e-mail. I spend a great deal of time on the road because I want to be with all of our teams on farm as much as possible and I still operate on a cow or two, here and there.

The good news is that, with 2016 already well under way, we are working well as a team and looking forward putting CVS's large animal division firmly on the map.

Life outside of work

Outside work, I enjoy spending time with my two lovely daughters, aged 5 and 6. I also enjoy cycling in the Buckinghamshire countryside and long distance ice skating on a huge lake in Austria. It has been a while, but I intend to take part again in 2017 in a 200 km race and put myself through 10 hours of suffering (the first five hours are fine) to prove I can still do it!