Conserving wildlife throughout my veterinary career 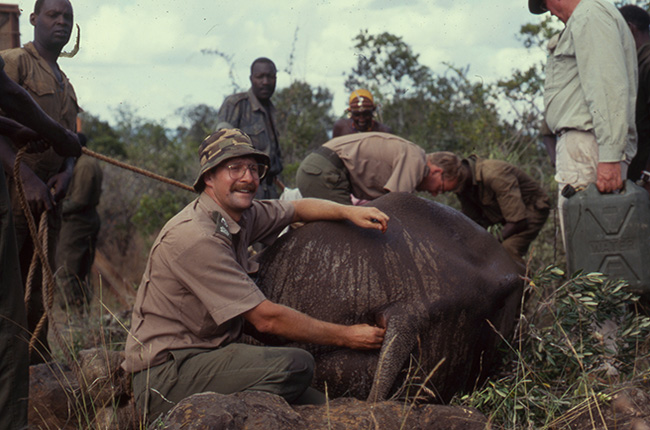 My career started in 1980, marked for me personally by the creation of a new state out of my native country Rhodesia, now Zimbabwe, a sort of severance from my past. Yet these roots had laid the foundation for my interest in wildlife and natural systems, which were to absorb me for my working life.

Small animal practice in the UK

As with all new graduates, the first priority was to get a job after a long hard slog to a professional degree. I took a job in a small animal practice in Southampton, but I soon moved on to general practice in the New Forest. I had three idyllic years working mostly with smallholders and a great variety of animals in one of Britain's only natural habitats. This provided a perfect consolidation of all the learning and the pleasure of the forest besides. I was even able to launch a publishing habit with the first case of Key Gaskell syndrome to be reported in domestic cats (Kock 1982).

Working in conservation with wildlife

Throughout this time my goal was to work in conservation and with wildlife, and a chance came with a job offer from the Zoological Society of London (ZSL). I was lucky. We moved to a small village in Bedfordshire and I cycled up the Whipsnade Downs every day to the park. I worked long hours out of the back of a Land Rover, in this extensive system of open paddocks and relatively unrestricted wildlife from all over the world. I was supported by a brilliant technician – we had a small shed for our equipment, a large postmortem examination (PME) room (we did at least two PMEs a day, and more in a harsh winter) and we had an office full of skulls – and a secretary who is still in post today. I was there for seven years and ended up as curator, in addition to my clinical duties. I left behind a small hospital carved out of an old experimental holding facility, much changed (heated) animal accommodation, more open paddock systems, integrated species management, new diets and, I hope, healthier animals and many good friends and colleagues.

My next step emerged when Richard Leakey, of paleoanthropological fame, launched the Kenya Wildlife Services (KWS), a government parastatal organisation to manage wildlife in this beautiful and extraordinarily diverse East African country. He had the foresight to want a veterinary unit in his team and he needed someone with wildlife veterinary skills to lead this. I moved with my family to Nairobi, with two boys and a girl, the youngest only three weeks old, and set up home in Karen under the Ngong Hills. I was seconded from ZSL and had only tenuous connections with it over the next 14 years as I forged my career in free-ranging wildlife.

I was content to be back in Africa, and happy to see my children grow up in this environment, as I had done. We settled well, despite the security concerns and frequent, sometimes dramatic, events that were common in Kenya at the time. The KWS was a large community with some 4000 staff and stations all over the country.

The veterinary unit was based in Nairobi by the National Park; it was basically a series of bungalows. I witnessed the emergence of a completely new professional body with the investment of nearly 300 million dollars of World Bank money. KWS was transformed and the veterinary unit was rehoused in our own designed facility with animal holding, labs and store/workrooms and offices.

My role was to mentor and develop a Kenyan team and we grew (each of us learning from the other) as competent in capturing, handling and resolving health issues in wildlife as any other group on the continent. I shifted the focus away from emergency care of snared and injured animals (the Daktari model as I called it) to a differentiated group working on: emergency care; surveillance and monitoring of wildlife health and disease; animal translocation; integrative research on zoonoses and wildlife-livestock interface disease concerns; field and laboratory diagnostics support to biological research activities; and development of local and international networks in support of our aims.

To begin with the work was still very much out of the back of a Land Rover, but now involved travelling many hundreds of kilometres and for many weeks at a time. There was an emphasis on elephant, rhino, large carnivores and herbivores, but we also at times dealt with birds like flamingos, and with smaller animals where there was a particular disease event or problem. 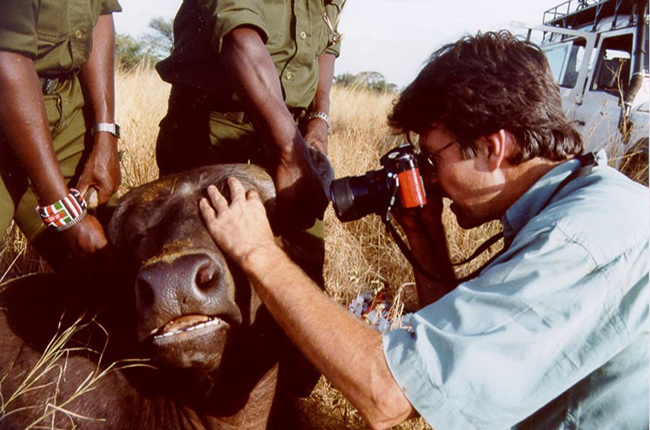 The rhino in Kenya were near extinction and the veterinary unit was pivotal in gathering together the remnant populations from all over the country and bringing them into intensive protection zones and fenced areas where they could be closely guarded. The strategy worked extremely well and from fewer than 300 survivors of the poaching wars of the 1970/80s, they began to recover.

One of the most interesting events, which in the end took me on to my next job, was a major rinderpest epidemic that spread across the country between 1994 and 1996.

This occurred at a critical time during a Pan-African rinderpest eradication campaign, when the authorities believed they had the disease under control. Without the formation of the KWS vet unit its presence would have remained cryptic and it might have spread widely before detection; it was apparently a mild virus in cattle, but with potential at any stage to revert to virulence and cause a major catastrophe in the livestock industry across Africa. It caused severe disease in wildlife species. Through our detection of the virus in wildlife we were able to bring the extent and persistence of rinderpest to the attention of the international community.

After eight years with the service both Richard Leakey and I moved on, and I look back proudly at this time in my life. Leakey left a legacy in conservation management and I left a thriving veterinary department at KWS, with 72 Kenyan staff, collaborating internationally and globally recognised as pioneers in this field. I moved on to work with a Pan African body of the African Union, the Inter African Bureau for Animal Resources (IBAR). My role was still with wildlife, but working on rinderpest eradication and other transboundary animal diseases. This was an expansion of my role into 10 African countries of Eastern Africa and occasionally beyond into Central and West Africa – for this I needed my pilot's licence and I graduated to a Cessna 185, the flying equivalent of the Land Rover.

I was again fortunate to join a brilliant team, an epidemiology unit, with colleagues from South Africa, the Netherlands, Ethiopia, Mali and Chad. They were all experienced veterinarians and together we worked on strategies, and in the field, to tackle rinderpest, and it was this core group that was instrumental in designing the final pathway that led to the eradication of rinderpest on the continent. This, along with the Global Rinderpest Eradication Programme orchestrated by the Food and Agriculture Organization, led to success and the global declaration of freedom from rinderpest in 2010. By 2006 my job was done, but I was glad to have established an office for wildlife health and a focus on natural resources in IBAR and African colleagues have continued in this role since, helping to shift the African Union away from a narrow view on agriculture to focus on natural resource management and sustainable use.

Returning to the UK

Somewhat reluctantly I returned to the UK to spend more time with my ailing father and to support my children as they entered tertiary education. ZSL embraced my return positively and I worked on conservation and health projects in Mongolia, Nepal, Saudi Arabia and Africa for another five years. I did not settle well though. I had become too critical of the captive animal environment and of conservation by remote control. I was frustrated by people who did not understand the needs or reality in target countries and who imposed what I could now see to be inappropriate conservation ideas and activities on others. To compensate I put my energy out-of-hours into completing a professional doctorate and co-chairing the International Union for Wildlife Conservation's wildlife health specialist group, the Species Survival Commission, and helping build this to an active community of over 400 wildlife health specialists in conservation. But clearly I had to move on.

I was fortunate to have the opportunity to make (perhaps) a final career step, this time into academia. I joined the Royal Veterinary College (RVC) in 2011, as professor of wildlife health and emerging diseases. I was privileged to be among the RVC's highly professional and academically gifted staff, once again learning, and contributing to teaching and developing research ideas. I have come to realise how important the nexus of people, agriculture and environment is in conservation and the key role veterinarians can play in moderating development to benefit all.

"I was fortunate to have the opportunity to make (perhaps) a final career step, this time into academia"

Over the past few years I have worked with colleagues to develop the first face-to-face One Health Masters course, jointly between the RVC and the London School of Hygiene and Tropical Medicine, which I now co-direct. I can bring in my experience to encourage a new generation to become more interdisciplinary in their work, to see health more holistically between humans, animals and their environments, and to embrace many disciplines in tackling health issues, which I believe is key to more balanced development, and a more ecologically and environmentally sensitive human society. I have also tried to continue to document my work and ideas, with now over 130 peer-reviewed articles or book chapters, all of which are a long way from my first experiences with a sick domestic moggy.