Combining work with travel in Australia

When I graduated from Nottingham in 2017, I planned to work in small animal clinical practice for at least two years before (hopefully) locuming in Australia for a year. However, I hadn’t realised there was an age restriction for the Working Holiday visa, and having graduated as a mature student, I was quickly approaching the cut off age of 31.

So, 18 months after qualifying, I found myself in Perth with my (non-vet) husband, about to start locuming. Eight months in, I have worked in 16 different practices across Western Australia, Queensland, the Northern Territory and New South Wales, with work lined up in Victoria and South Australia, as well as having fitted in plenty of time being a tourist.

First, I needed to get organised. I remembered an inspirational conversation I’d had with Australian recruitment company Vetlink at a British Small Animal Veterinary Association congress. I had kept the business card on my noticeboard and, when I realised I needed to get a move on, we scheduled a phone call. The advice I received was really helpful, especially concerning the moderately complicated process of navigating visas and the different state requirements as regards professional registration.

Australia doesn’t have an overarching veterinary board equivalent to the RCVS, so vets have to register in each state or territory (each one costing a different amount). Some have mutual recognition, but not all…for example, you can work with a Queensland registration in New South Wales, Tasmania or Victoria, and vice versa. But to work in the Northern Territory, Western Australia or Australian Capital Territory, the requirements are different. Even if you’re registered elsewhere, the Northern Territory requires you to register there (which is free). However, if you want to work in Western Australia, you have to pay to register (although other states recognise its registration).

My Australian adventure began in Perth so I first registered to work in Western Australia, and having (accidentally) let it expire after three months, I had to re-register in Queensland.

To complicate things further, different states require vets to have different licences that allow them to carry out certain tasks; for example, for microchipping (free) and to use radiation (approximately £90 in New South Wales). And, in order to work there, I had to have these in place as a requirement of several locum contracts. They are easy to obtain online, but are another thing to remember to do if you’re planning to move between states.

Of course, there is also the general admin – travel insurance (or backpacker insurance if you’re going to be away for a long period), professional indemnity insurance, obtaining an Australian ‘tax file number’, registering for Medicare, a pension account, a bank account, and informing the RCVS that you will be working overseas.

On the other hand, finding work has been fairly straightforward because the demand for vets is similar to that in the UK. I started off with Vetlink, which found me my first three jobs in Perth, but I also advertised myself on a couple of vet employment and locum Facebook groups, and received offers straight away.

This has been a great way to see places I wouldn’t have initially considered. For example, I advertised that I was looking for work in Brisbane, and received an offer to work in Alice Springs. At first I declined, but when a month of work in New South Wales fell through, I got back in touch to ask if they still needed someone. This led to one of my absolute favourite months so far, being out in the desert in the middle of nowhere, with a fantastic visit to Uluru (Ayers Rock) as well.

Unsurprisingly, the travel opportunities have been amazing. We have scuba dived the Ningaloo and Great Barrier reefs, swum with whale sharks and humpback whales, and stayed in a variety of places – from Perth to the far north of Queensland and the Blue Mountains National Park in New South Wales. We’ve seen wild cassowaries, turtles and platypus, we sailed the Whitsunday Islands, and took a helicopter trip over Uluru and Kata Tjuta. 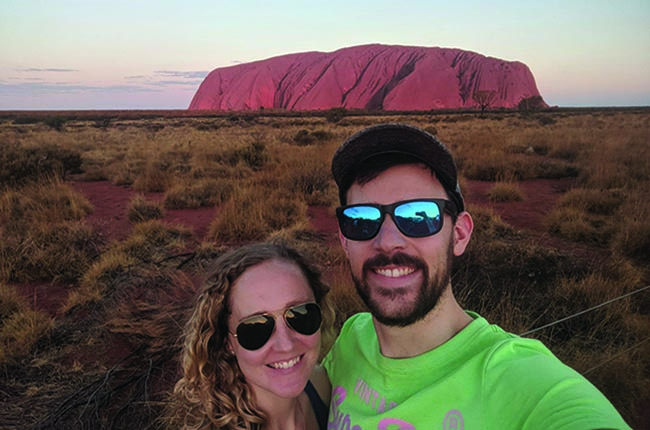 Alternating work and travel has worked really nicely as I’ve earned enough in short periods to have extended periods of time off, a luxury I didn’t have in the UK.

The pay is roughly equivalent to locum jobs in the UK, and we have often been given free accommodation. Many places offered it as part of the package, sometimes with a car as well. Many also offer flights if you’re out of state, so my return fare from Brisbane to Alice Springs was paid for. Of course, the quality of accommodation varies and we have often had (lovely) fellow locum housemates, but you can’t complain at all when it allows you to save so much money.

We have also discovered the world of house-sitting. There are people all over the world looking for sitters for their pets, and being a vet or a vet nurse gives us an advantage. We have done six house-sits across Australia, looking after 10 pets. These opportunities often come with a car, which has allowed us to save literally thousands of dollars on rent and car hire (and includes the bonus of pet cuddles).

Veterinary work is similar to that in the UK. I’ve seen all the standard foreign bodies, wounds, illnesses and preventive care cases. However, heartworm, tick paralysis and snake bites were new to me. It’s also worth remembering that in such a huge country there are big regional differences to take into account. In some rural communities parvovirus cases are a daily occurrence, yet are unheard of in the wealthy beach area of Sydney, where multiple cases of tick paralysis are presented every day.

Snake bites are complicated as there are so many venomous species and bitten animals often have unusual reactions, but thankfully I’ve only seen two.

'The pay is roughly equivalent to locum jobs in the UK, and often boosted by the availability of free lodgings'

As far as clients are concerned, Australian pet owners are, in general, more relaxed (although very few insure their animals) and Australian vets don’t seem to fear being reported to the board. Having said that, I have also had my worst experience of being verbally abused by a client, so obviously you can’t generalise.

Before I came to Australia I’d worked in a busy corporate small animal practice, and had learned a lot, but had never worked sole charge or on-call.

I’ve now done both of these, which I admit were well outside my comfort zone. On-call work is a challenge, but when things go well, you get a big confidence boost. I recently did a late night caesarean section with the help of just one nurse, in a clinic that I hadn’t worked in before. Thankfully, it went well. I’ve also been forced to attend to more wildlife than I would have chosen to, as exotics specialists are few and (very) far between, and Australians seem to be good at bringing in injured wildlife. I’ve met baby kangaroos, possums and parrots, sutured a green tree frog and treated a kookaburra. As someone who has always avoided anything non-furry, it’s been interesting. 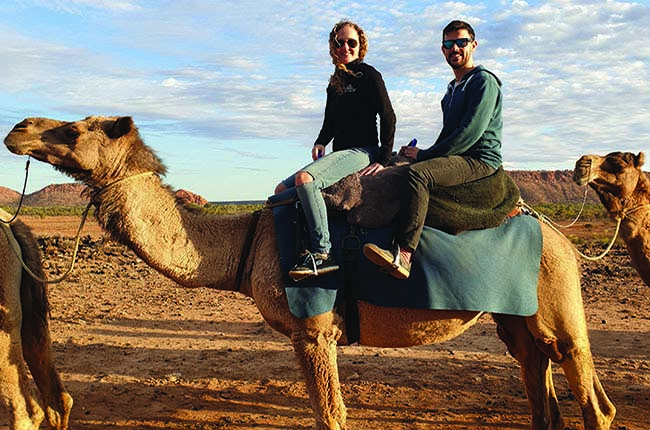 I’ve worked in a variety of areas and types of practice, too. From tiny old fashioned one-vet practices in rural areas to busy 24-hour hospitals with specialist departments on site and clients with extremely high expectations. I’ve met inspirational colleagues who have become friends, and have invited lots of people to visit the UK!

Many people have said how lucky I am to be able to have this opportunity. It’s true, we vets are incredibly fortunate that our job makes it pretty straightforward to work for a decent wage, while having incredible travel experiences. It has been a fantastic career experience as well, and I definitely know what I do and don’t want from a job when I’m back at home.

So, apart from coping with the initial paperwork and having to be incredibly well organised, I would say that if you want to do it too, go for it. You won’t regret it.