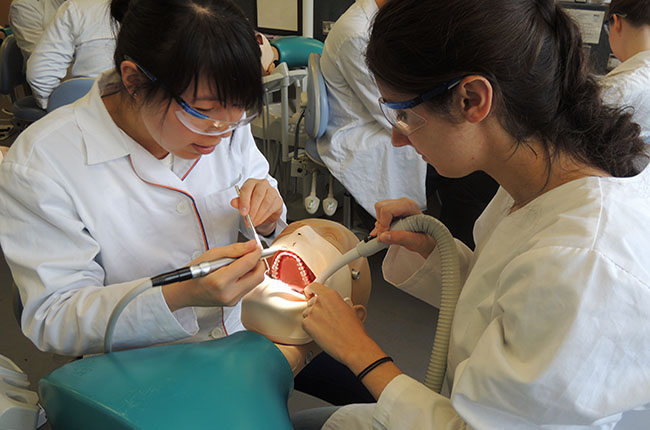 Dental disease was mentioned in a classic textbook of small animal practice, Frederick Hobday's ‘Surgical Diseases of the Dog and Cat’, first published in 1900 and reprinted for many years afterwards. Despite this promising start – the book recommends and illustrates use of the infraorbital nerve block for example – the subject somehow failed to take root within academic veterinary medicine. The situation only began to change with the establishment of the American Veterinary Dental College and the British Veterinary Dental Association, both founded in 1988.

Dental referral work is currently undertaken by a small number of American or European diplomate specialists operating from within private practice; there are no residency training programmes within UK veterinary schools. This has probably contributed to the lack of embedded teaching within the veterinary schools, which tends to be driven by the clinical specialty services.

For several years, we have tried to address this at Edinburgh vet school, both by giving dental conditions high visibility in vertical thread teaching such as anatomy, and also by implementing teaching within clinical skills, as well as on clinics and special rotations. The teaching is provided by experienced general practitioner vets with an emphasis on ‘everyday’ dentistry and the problems they face. More advanced dentistry is only taught in terms of when to consider referring complex cases, if referral is available.

Collaboration using a One Health approach

A recent collaboration using a One Health approach to teaching dental core skills at Edinburgh involves using the staff and facilities at the Edinburgh Dental Institute (EDI). The EDI was established in 1999 to develop educational opportunities for the dental team. It is located in Lauriston Place in central Edinburgh and occupies the top three floors of the Lauriston Building, which is a dedicated out-patient centre for dentistry and a number of other medical disciplines. It is a part of the school of clinical science and community health of the College of Medicine and Veterinary Medicine of the University of Edinburgh.

In 2014, a two-day pilot course for fourth-year vet students was organised in collaboration with lecturers on the EDI BSc oral health sciences degree. The course combined theoretical and small group practical instruction in the EDI's high-fidelity clinical simulation unit, which uses phantom heads incorporating realistic dental models with variable periodontal pathology. Setting up the course involved some cross-species and interdisciplinary reading on the part of both sets of staff involved. What was perceived as a possible disadvantage (teaching vet students on human models in a human clinical environment) actually turned out to be a strength as it opened up a variety of practical, clinical and ethical questions associated with treatment. Lectures and discussions ranged freely across human and animal diseases, treatments and patient/client communication and compliance issues. The pilot was deemed to be successful, receiving excellent feedback from students, so in 2015 was incorporated into whole-cohort third-year teaching. 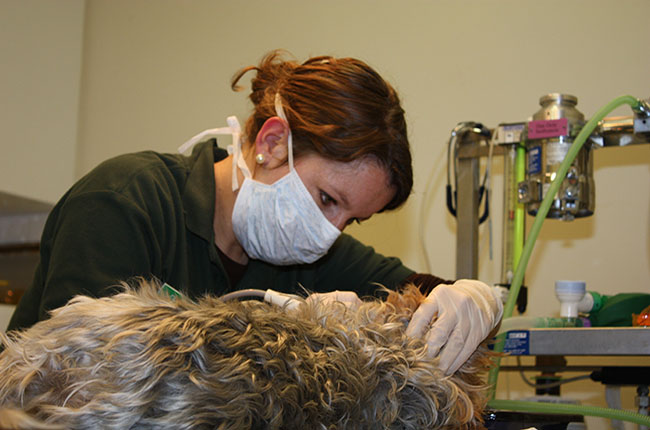 The 2015 EDI course was carefully designed to follow the standard third-year lecture course in dentistry at Edinburgh, and was preceded by two vet school practicals. One of these involved having the students make their own low-fidelity prophylaxis model based on a version of the model developed by Rachel Lumbis and colleagues at the Royal Veterinary College. Students seemed to enjoy the craft element of making their model, which they would subsequently ‘treat’ in a following class. Many models showed considerable artistic licence and creativity, while still managing to be anatomically correct! The aim was to establish (often counterintuitive) correct instrument holding and use on a flat ceramic tile surface, before moving on to 3D models and phantom head simulators at the EDI; also, that students should learn about the variety of instruments and equipment in dental prophylaxis and their safe and effective use. By having multiple exposures to the instruments and techniques several weeks apart, learning and skills acquisition could be built on. It is interesting to note that oral health students spend approximately 110 hours learning these basic techniques, before they move on to other techniques such as restorations and extractions.

At the EDI, third-year students rotate around a set of instructor-led stations, each of which features an instrument, piece of equipment or a technique used in routine prophylaxis. Students benefit from the high-fidelity simulation, the memorable learning experience aided by the novelty of working in a human clinical environment, and from constant reference to similarities and differences between human and veterinary dentistry, often using clinical cases as illustration.

Since this teaching was introduced, the number of students seeking a dental-based project for the student research component within their degree has increased considerably. These techniques are also useful for third-year students embarking on their first extra-mural studies placements. Armed with knowledge and practice on prophylaxis, they can confidently ask to be allowed to perform this procedure and thus gain all-important confidence in a clinical setting.

Extractions are not covered in the EDI class. Extraction wet labs take place in fourth and final years at Edinburgh. Further service-based teaching was introduced in 2015, when final-year students helped to manage dental cases at a busy charity animal hospital (PDSA Edinburgh PetAid Hospital) during a three-week dentistry and ophthalmology rotation. Around 80 cases were treated by three groups of four supervised students in a pilot selective rotation. Students also spent a day seeing referral dentistry at a local specialist practice, DentalVets in North Berwick, to gain an insight into the possibilities of this discipline at advanced level.

Dentistry seems something of a Cinderella subject in veterinary education. In general practice, it has a reputation associated with stress and difficulty, often because the extent of disease is hard to predict and also because some everyday procedures, such as extraction of major teeth, are technically challenging even for experienced GP vets. Dentistry, like orthopaedics, is heavily dependent on specific equipment and technique. It remains an area that is ripe for expansion in veterinary education in the knowledge that there is a huge amount of disease in the animal population – up to 85 per cent of cats are thought to suffer from dental disease, for example. Addressing this will not only relieve animal suffering but also contribute to the financial success of general veterinary practices and the evolution and expansion of the specialty discipline as new enthusiasts emerge.