Coll and Tiree Vets, based on the small Hebridean Isle of Tiree, may be one of the smallest and most remote veterinary practices in the UK. Despite the name, it has only one vet - the other member of staff is my husband Mark. He mans the reception, manages the accounts and credit control, helps out with support duties and much more besides.

We moved here from Devon in August 2015. I was working in a large mixed practice in rural Devon with a strong support team around me and life was good. So what made us decide to move 600 miles north, especially considering the job involves being on-call 24 hours a day, seven days a week?

It’s mainly because here we enjoy a chilled out way of life - there is less stress and a smaller workload, and being my own boss means I can take time out on a quiet working day if I choose to.

The move began with an advert in the Vet Record, seeking ‘someone who would be interested in a vivid frontier of land, sea and sky’ - it had been placed by the previous vet who was retiring after 30 years.

"The island also has a high school, three doctors, a resident optometrist, a visiting dentist, a film club and a visiting cinema, two gyms and a gin distillery"

Getting here from the mainland involves a four-hour ferry crossing from Oban. Many people would consider it remote; however, to us, ‘remote’ is only a state of mind.

In fact, there are twice daily flights to Glasgow and we have 4G phone coverage, fibre broadband and a Co-op that’s open seven days a week from 7 am to 10 pm. The island also has a high school, three doctors, a resident optometrist, a visiting dentist, a film club and a visiting cinema (known as the screen machine), two gyms and a gin distillery.

What does an average working day look like? Each day begins with open surgery from 9 to 9.30 am. No appointment is necessary. On the busiest days - when half a dozen people arrive - it may run on until after 10 am, but on other days nobody will turn up.

A typical surgery might consist of a dog with an infected ear, a cat that’s off its food and a couple of crofters coming in to collect cattle wormers or lambing supplies. There’s no rush and plenty of time to chat to our clients about the sunny weather that’s forecast or an amended ferry timetable. 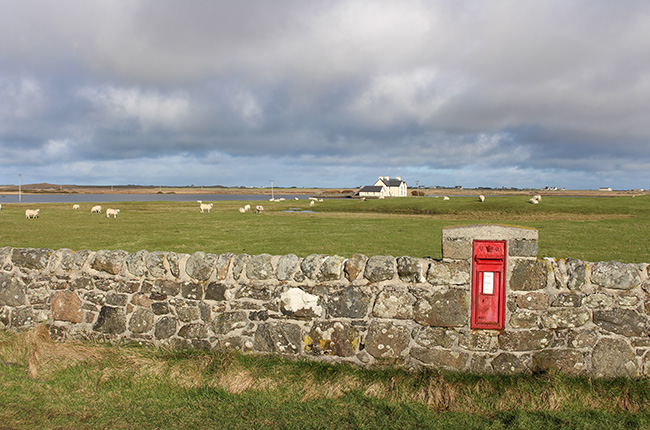 After surgery, Mark and I return to our office at home - a couple of metres from the practice building - where I might phone a client to book an appointment to take some blood samples from their cattle and Mark might deal with invoices and administration.

Small animal surgeries involves turning the consulting room into an operating theatre and bringing in the anaesthetic machine, surgical lamp and other equipment from the store room.

An afternoon might involve a call out to a seal pup that somebody has reported on a local beach. We are among 20 marine medics on the island trained by British Divers Marine Life Rescue. There might also be time for a visit to the pier to treat a collie dog brought over from Coll. I would aim to complete this while the ferry unloads and loads ready for its return journey. All being well, and treatment given, the dog would return home with the ferry, otherwise it would stay on as an in-patient for a day or so until it’s well enough to return back home the same way it arrived.

Evening surgery runs from 6 to 6.30pm and is very similar to morning clinics.

On the days when there are no large animal appointments booked, we may spend the day beavering away in the office, or we may decide to go for a walk or visit a retired friend.

There are no back-room staff in this practice, we share all the duties.

Would the life of a mixed vet in a rural Highlands and Islands practice appeal to everyone? No. It’s a long ferry journey to the nearest Marks & Spencer, McDonalds or Costa, although this isn’t an issue for us. 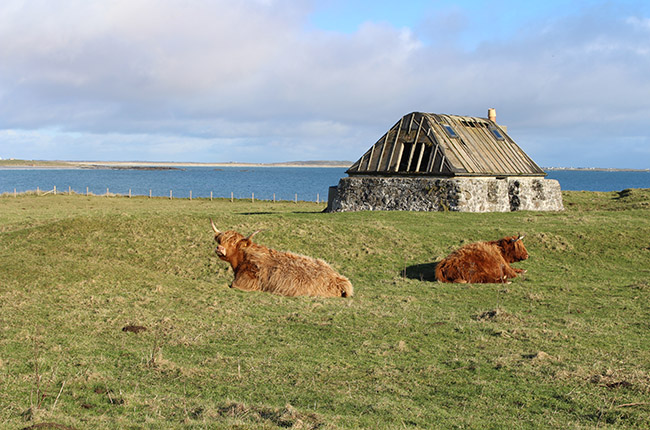 What would we say to others considering a similar move? You might regret not trying something new. Even if it doesn’t work out, the worst case scenario is that it has cost you a little money and you can go back to your old way of life.

The move here has certainly worked for us. We plan to finish our careers on Tiree and retire here too.

About the Islands of Coll and Tiree

Tiree, the most westerly island in the Inner Hebrides, is a tiny island of 30 square miles and a population of around 650 people. Its neighbour, Isle of Coll is almost the same size, but with a population of under 200.

The islands have mild winters (winter temperatures similar to coastal southern England) and cool summers. Farming/crofting and tourism are the main sources of income for the islanders. There are approximately 1500 breeding cattle on Tiree with a further 350 on Coll; sheep numbers are around 5000 on Tiree and 3000 on Coll. The island is popular for windsurfing and other water sports, and hosts the Tiree Wave Classic - the longest running professional windsurfing event in the world.