How to become a vet working in conservation medicine 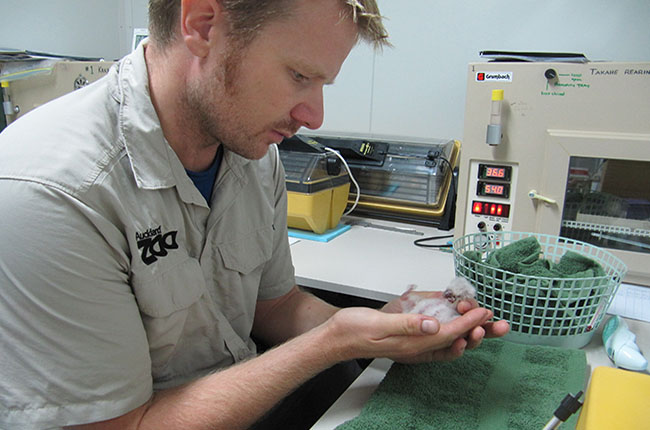 On the three-year anniversary of my arrival in New Zealand, I was woken up at 5 am by a male kakapo scratching and skraarking (their unique call) outside my bivvy bag. I was camping in the forest near a kakapo nest, which contained a sick chick that I had been checking on throughout the night. As someone who loves being outdoors, and as a vet who always wanted to work in conservation, this felt pretty much perfect to me.

Developing a passion for conservation

I was always interested in wildlife and knew I wanted to be a vet from a very young age. My parents were fairly tolerant, even when it involved temporarily housing some of Sheffield's wildlife in my bedroom (the smell of a tank of tadpoles being fed raw bacon, and the escape of my pet spiders and snails, being favourite family stories), although they drew the line at turning my wardrobe into a vivarium. The books of Gerald Durrell held just as much interest for me as the ones by James Herriot and so my interest in animals and being a vet started to evolve into my passion for conservation and the positive impact that vets can have in this field.

I felt particularly lucky to be accepted onto the vet course at the Royal (Dick) School of Veterinary Studies, as it has a significant amount of exotic and wildlife teaching in addition to the core domestic animal training. After qualifying in 2000, I worked in mixed practice and encountered the vertical learning curve experienced by every new graduate. Luckily, my training equipped me to deal with eggbound iguanas as much as cow caesareans and cat spays. I went on to work in small animal and exotics practice, initially in Surrey and then in Manchester. Although I enjoyed the work, I realised that the routine of domestic practice was not where my true passion lay. I started volunteering at an RSPCA wildlife hospital and attending meetings of the British Veterinary Zoological Society, and the vets that I met inspired me to pursue a full-time career with non-domestic animals.

In 2007 I was extremely happy to become a clinical scholar in conservation medicine at Chester Zoo and Liverpool university. This three-year zoo vet residency sent my learning curve vertical once again. Learning an eclectic range of clinical skills, including anaesthetising giraffes, darting angry chimpanzees and performing ultrasound examinations on venomous snakes certainly pushed me to the edge of (and sometimes well out of) my comfort zone. These amazing animals provided me with numerous embarrassing stories, as well as cases to write up for the RCVS certificate in zoological medicine, which I completed in 2008.

"Learning an eclectic range of clinical skills, including anaesthetising giraffes, darting angry chimpanzees and performing ultrasound examinations on venomous snakes certainly pushed me to the edge of my comfort zone"

During the residency I also completed an MSc in wildlife infectious disease control, which increased my knowledge in several areas, including critical analysis and research methodology. Performing research is an important part of zoological medicine and is vital to the long-term success of zoo-housed populations, as well as providing ample topics for publications and presentations. I enjoy the academic challenges of this side of zoo work, and seeing the results of research benefiting the animals in our care is its own reward.

After the residency, I spent two years working in a range of small animal, exotics and wildlife roles, before accepting an associate vet position at Auckland Zoo in 2013; in 2015, I became the zoo's veterinary services manager.

The veterinary services department is housed within the New Zealand Centre for Conservation Medicine (NZCCM) at the zoo. I enjoy working with a dedicated team of people and for an organisation that has conservation medicine at its heart. We provide veterinary care to the animals in the zoo and also to native endangered species in the wild, such as kakapo, kiwi, takahe, tuatara, sea lions and sea turtles. The varied clinical caseload provides regular new challenges to overcome and is the type of work I dreamed of doing as a teenager.

We are also involved in conservation fieldwork, in research, and in performing visitor engagement through our clinical work, as the NZCCM is on view to the visiting public. Having families walk into the gallery and watch through the glass as we take radiographs of a tiger, or listen as I talk them through a sea turtle stitch-up, was daunting at first, but is now a routine part of my daily work. This interaction allows the veterinary team to convey not only what we are doing, but also why conserving these species is important, and how the visitors might get involved in conservation themselves. In this way the veterinary team contributes to the conservation impact of the zoo as a whole. 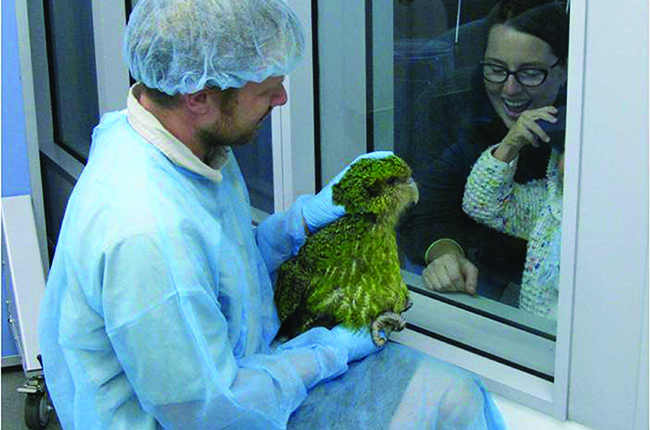 James in involved in conservation fieldwork, in research, and in performing visitor engagement through clinical work, as the NZCCM is on view to the visiting public

It is the conservation fieldwork, however, that provides some of the more unique challenges and most significant rewards. The privilege of working with endangered species in some of the most pristine environments that New Zealand has to offer has been an unexpected but welcome part of my work at Auckland Zoo.

New Zealand has a large number of critically endangered native species and kakapo are one of the biggest in size, but one of the smallest in number: at the start of 2016 there were fewer than 130 alive. They are flightless, nocturnal and the heaviest parrot species in the world, and only survive on pest and predator-free islands. Kakapo are long-lived, but have a slow reproductive rate, with breeding seasons only occurring every three to six years. The Kakapo Recovery Group, led by Deidre Vercoe of the Department of Conservation (DOC), has responsibility for overseeing the plan for the survival of this species and I have taken on the role of veterinary coordinator to this team. The work includes providing hospitalisation and treatment of sick birds, formulating a response to emerging disease threats to the population and, in a breeding season, coordinating a team of experienced avian vets to provide assistance on the islands.

Getting to the protected islands where kakapo live is not routine. After flying to New Zealand's South Island, we have to clear DOC quarantine (biosecurity is a crucial part of protecting these islands) and then wait for a break in the weather to allow a helicopter to fly us out. Once on the island, providing care to the birds requires a wide range of non-clinical as well as clinical skills, with the vet being just one part of a highly skilled team.

Each adult bird has a radiotransmitter attached with a back-pack and is located using telemetry equipment. Locating a bird can take up to five hours of walking off-trail through the hills and is tough going for the uninitiated. Even simple tasks can seem difficult: taking a bird's heart rate can be tricky with your own heart beat pulsing in your ears; and taking a blood sample and making a blood smear while on a hill in the rain certainly feels a world away from the comforts of a veterinary clinic. Similarly, learning to hand-rear one-day-old, 25 gram chicks of this critically endangered species certainly keeps me focused on the job at hand. However, camping out in the forest and tramping between nests at night to check on chicks has been a fantastic experience, and seeing chicks successfully returned to the wild makes all the stress and sleepless nights worthwhile.

This year has been a successful breeding season, with the addition of over 30 chicks to the population, and it has been a privilege to be a part of the team.

"Knowing that the survival of an individual animal can have a positive impact on the survival of the species brings a mixture of emotions: pressure, responsibility, excitement and satisfaction in equal measure"

Pursuing a career in conservation medicine has required a lot of hard work and dedication, but the rewards have more than compensated for this. I enjoy working for an organisation that inspires people to make a difference in conservation. Working with species such as kakapo and knowing that the survival of an individual animal can have a positive impact on the survival of the species brings a mixture of emotions: pressure, responsibility, excitement and satisfaction in equal measure. This is what the veterinary team at Auckland Zoo thrive on and it has been one of the most rewarding parts of my career so far.