A career in equine practice 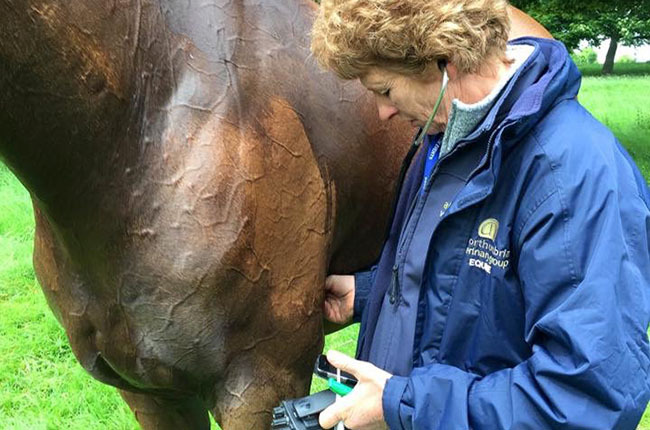 My parents were farmers in the Lake District so I was always out on the farm, helping my father with the cattle and sheep. I rapidly developed good practical skills with large animals and rode ponies from an early age.

From the age of 10, I helped out a local vet practice on Saturdays. It was all I ever wanted to do; however, I didn't get the A level grades needed for veterinary medicine so I took an agricultural science degree at Edinburgh university instead. As I passed with first class honours, I was then able to reapply to the Royal ‘Dick’ and was accepted to start my veterinary degree – studying for a total of nine years. As my parents are not from an academic background and I was the first in my family to go to university, it was quite a way to start.

A passion for horses

Horses were always my passion and, when I graduated in 1986, I was hoping to work in Newmarket but, at that time, it was preferred that graduates did two years in mixed practice first. I got a job with Aln Veterinary Group in Alnwick, Northumbria. At that time, it was a small mixed practice with four vets and little equine work. I was the fifth – and the first female – vet to join them. Thirty years later, I am still here. Today, as the Alnorthumbria Veterinary Group and a member of CVS, we have 28 vets, including six equine vets and a large equine clinic.

"I gained the certificate in equine practice in 1992, becoming the first vet in the north of the UK to receive this qualification"

Getting to this stage, of course, took a huge amount of effort. I gained the certificate in equine practice in 1992, becoming the first vet in the north of the UK to receive this qualification. As we had little equine work, we had no equine clinic facilities and I would place traffic cones outside the practice when I needed to trot up a patient. As the equine business grew, we were able to add an equine clinic and went on to open our full equine facility at our Morpeth branch in December 2011. Event rider Mary King MBE officially opened the facility with 300 clients in attendance.

While my clinical work in practice is my priority, I started work at Newcastle Racecourse in 1991, becoming Senior Veterinary Surgeon in 1996, a role that has grown over the years as the course has become one of the largest all-weather race tracks in Europe. My responsibilities include ensuring that the course has sufficient veterinary cover throughout the year and that veterinary work and course facilities meet British Horseracing Association standards.

In 1998 I joined the BEVA Council with equine welfare as my main area of responsibility and in 2005 I was elected president. During my time on the council, I worked with the Government and the major equine animal welfare organisations in developing the Animal Welfare Act 2006, the Equine Health and Welfare Strategy and the Welfare Compendium. I was honoured when my work was recognised with the presentation of the BEVA Equine Welfare Award by HRH the Princess Royal in 2006. I am currently honorary vice-president of the National Equine Welfare Council and a loyal BEVA supporter.

I am also an official FEI vet (Fédération Equestre Internationale), a role that enables me to work at British events. This involves health and passport checks when the horses arrive; trot ups for fitness to compete and, of course, working with the treating vet when dealing with emergencies.

One highlight of my career was working at Greenwich Park for the equestrian events during the London 2012 Olympic Games. The camaraderie among the equine vets made the experience memorable, as I'm sure it will be in Rio de Janeiro this year.

The majority of my time is still spent in practice and I take satisfaction in driving up clinical standards. I particularly enjoy working with performance horses, trying to maximise their results or getting them back into work after injury. My main areas of clinical expertise are lameness, respiratory disease, dentistry and their impact on performance.

Outside work, I have two horses of my own and enjoy hunting and eventing – I managed to compete at 10 British Eventing fixtures in 2015.

If I have one message to pass on to younger veterinary surgeons who are thinking about their own career development, it would be to say that there is always more to learn. Keeping up with your education is critical and always say yes to any opportunity that comes your way. Nothing is impossible if you set your sights on what you want and keep working towards your goal.