Building a career within wildlife and zoo veterinary work 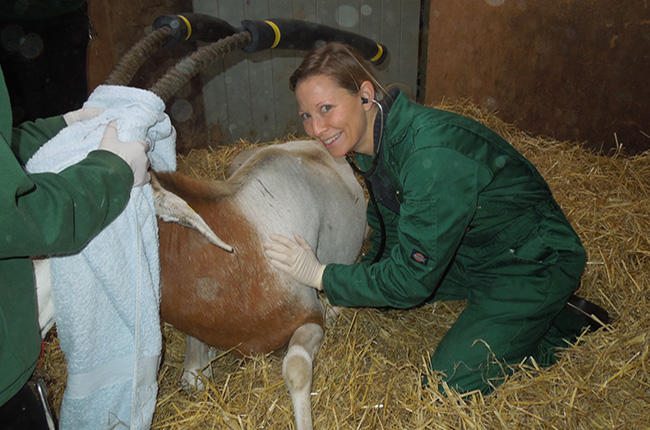 Like many of my peers, I knew from a very young age that I wanted to be a vet. Throughout my childhood, I pleaded with my parents to get various pets and saved up my pocket money for a year to buy fencing for the garden to contain pygmy goats. The goats never materialised, but the fencing was put to use when we got a dog, so I couldn’t complain.

I was lucky enough to get into Bristol university, but before embarking on such a tough and long course, I needed a year to explore the world, so after working on the production line at BMW, I had saved up enough money to fly to the southern hemisphere to travel.

Vet school was fantastic but hectic, juggling academic workloads, EMS, summer travels and a growing group of friends. Wanting to give an edge to my future career plans, I managed to get a place on the intercalated veterinary pathology degree at the Royal Veterinary College (RVC), where my interest in virology was piqued through a project on bovine viral diarrhoea virus.

That summer I went on the prestigious Cornell Veterinary Leadership Program in upstate New York, which was a fantastic research-based summer school, bringing together veterinary students from around the world. This gave me a grounding in robust scientific methodology and evidence-based research as well as a wealth of experiences I had not previously acquired.

Throughout vet school I continued to have a long-term goal of working with wildlife, and I tried to get as much experience with as many different species as possible. I was selected for the final-year exotics elective at Bristol Zoo, which gave me hands-on experience in the role of a zoo vet.

After graduation, I travelled with three friends from my year to Central America. We started out working at a sea turtle project in Guatemala, where our job was to patrol the beaches through the night looking for turtles. It was legal for the locals to take the eggs of the turtles for the food markets, where they were a delicacy. The basic principle was first one to the turtles got the eggs! Although everyone respected this rule, it was unnerving walking along a beach at night when the opposition would come along on quad bikes armed with machetes!

We then went on to volunteer at Guatemala’s largest wildlife rehabilitation centre in the jungle, helping feed, clean, medicate and perform pathological investigations on the animals that were destined for release. We lived in shacks with resident tarantulas, coral snakes and scorpions as our roommates. These experiences of real-life conservation work helped me understand the complexities and challenges of wildlife conservation in developing countries, and furthered my motivation to become more involved in these areas. Before coming home, I volunteered at a neutering and veterinary clinic on an island off the Honduran coast, giving me invaluable surgical experience.

My formative years as a newly qualified vet were spent at my former foster practice in Oxfordshire – a busy mixed practice, where I dealt with all species from stud boars to backyard hens. I became especially interested in camelid medicine, involved with some of the largest alpaca herds in the country, and I volunteered to see pet birds and reptiles.

I spent five years there, building up my experience and enjoying the closest to a ‘James Herriot lifestyle’ that was available for a young vet in the 21st century. But my long-term passion was still to pursue a career with wild animals, and so I saved hard and in 2013 I took the plunge, leaving practice to embark on a full-time Masters course in Wild Animal Health at the RVC and Zoological Society of London (ZSL).

The MSc year was intense, interesting and exhilarating. It was wonderful being back in a learning environment, but the zoo clinical rotations maintained a practical aspect, and most of us were also working as locums at weekends to help fund the course and keep our clinical skills polished. The networking opportunities created during this year were unparalleled for a future in wildlife conservation and zoological vetting work.

I was lucky enough to undertake my research project in the Kalahari Desert, western Botswana, trapping and placing locomotion tracking collars on wild cheetahs living in farmlands. 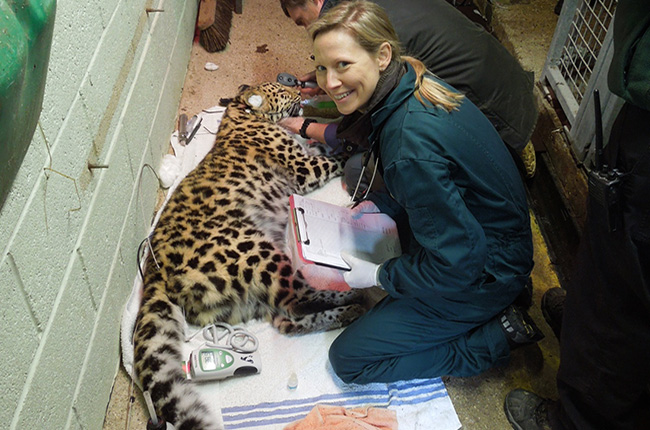 This clinical field experience was amazing: I will never forget the sensation of standing on top of the wooden crate, opening the door and releasing a wild cheetah back into his territory as he shot out with incredible acceleration into the bush. The MSc year gave me a broad education, not only in clinical work with wildlife and zoo species, but also in exploring successful practical approaches to conservation.

Following my Masters degree, I joined ZSL to work on reintroduction projects with native UK species, which I greatly enjoyed. This involved not only detailed pathological investigations, but also report writing for national strategies and disease risk analysis of translocations and reintroductions.

After a spell in this role, an opportunity for clinical work with wildlife came up, and I was thrilled to be appointed to the role of zoo veterinarian at Marwell Zoo, a beautiful zoo and conservation charity in Hampshire.

Zoo veterinary work is both similar to domestic work in some ways, and very different in other ways. The basic clinical approach and evidence-based decision making is identical, regardless of whether the patient is a 1 g critically endangered snail or a two tonne rhinoceros.

Obviously, a full clinical examination is often restricted to animals under anaesthesia, but I was surprised at how well-equipped I was to deal with zoo species from my broad mixed practice background and by working from first principles. Although there are no clients, the keeping staff are highly experienced and professional, knowledgeable people, from whom I have learnt a lot.

On the whole, the animals are fit and healthy, and the emphasis is much more on preventive medicine and high welfare than on sick or emergency cases, although these do also come up. I will never forget my first giraffe anaesthetic or my first tiger health check. A challenge of zoo work is that very few pharmaceuticals are licensed, and that there is limited published data on many species, so each case requires a large amount of research to come up with a clinical plan. My research experience has greatly helped in the approach to these cases, and highlighted the necessity for all vets working with exotic species to be encouraged to publish their case reports and drug doses widely, to increase the evidence body available for other zoo clinicians.

At the zoo, as in practice, no two days are the same. I now run the Marwell veterinary team, so being a manager has added a new dimension to my role as a vet, and has given me a whole new skill set.

It is fantastic to be involved with the design of zoo projects, to be able to put veterinary input into enclosure design and animal handling facilities, and to lead the animal training process to maximise animal welfare by training animals for veterinary examinations, to avoid the necessity of darting and anaesthesia where possible. I am also very lucky to work for a charity whose core mission is conserving natural species and environments.

Our zoo animals have been involved in many global reintroduction projects, so it is very fulfilling to be involved with the bigger picture conservation element that I have always been passionate about.

While there is a lot more office-based work than in domestic ambulatory or small animal practice, it is varied and interesting.

Being a small team, we are involved in practice management, running the pharmacy and diagnosing and treating clinical cases, but also ethical discussions, public education, teaching students, developing animal welfare assessment tools and other behavioural and nutritional research. There is associated legislation and regulation involved with moving zoo animals between zoos across the world for conservation breeding programmes, and a lot of the routine veterinary work is based on diagnostic testing pre- and post-move.

It is wonderful for me to be involved in the development of such a progressive, conservation-based charity, and I am greatly enjoying the varied work it entails. I am hopeful that in the future there will be even more scope for skill and knowledge sharing in developing countries and across international conservation projects, in parallel with the daily zoo clinical work.