Becoming a vet…is it worth the student debt? 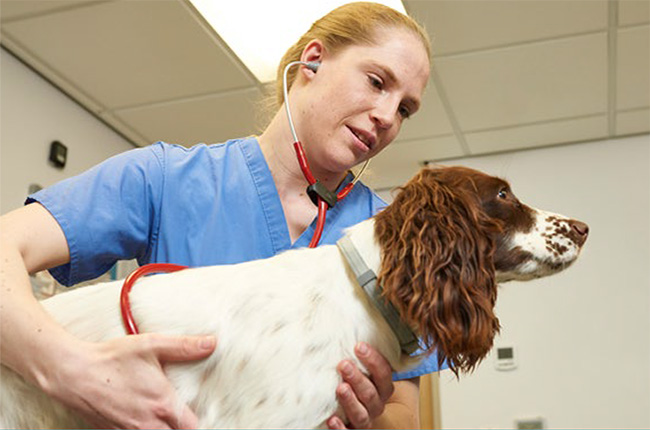 Like many members of our profession, becoming a vet was an aspiration of mine from a very young age. I spent my teenage years focused on obtaining the all important vet school offer and I doubt that anyone could have put me off if they’d tried. Whilst applying at the age of 17, I thought very little about the issue of student debt and how it might affect me in later life; it certainly wasn’t something that was going to dampen my ambition.

I was lucky enough to train in Edinburgh when undergraduate vet school tuition fees averaged at £3,000 per year (which seems a modest sum compared to the current £9,000 per year). I qualified with approximately £37,000 of debt; when I say that figure out loud, it sounds a staggering amount but, the reality of it is, it isn’t something that concerns me. I view my monthly student loan payments as an ’additional tax’ - money I never see - and I feel that accumulating this debt was worthwhile to be part of a profession that I love (most of the time!)

It is true that my debt has in some ways shaped my job selection, but only in the sense that I have felt uneasy about applying for internships or further university studies because of lowered income and/or additional tuition costs.

BVA recently surveyed some of their younger members and asked them how their debt impacts them. They were asked if they were aware of the amount of debt they would incur during their studies and whether having debt post graduation causes them anxiety or affects their career choices. The case studies are refreshing to read as it seems that both undergraduates and postgraduates feel similarly: that their debt does not cause them great worry and that they feel it is both manageable and justifiable.

I graduated from the RVC in 2013 from a six-year BVetMed course with integrated BSc. I had calculated a rough estimate of the likely debt before starting my degree but was about £10,000 short! I graduated with a £63,000 student loan debt.

After the initial realisation that I would likely be in debt for the rest of my working life, I would not say it has impacted on my life choices as, unlike other debt, it is a relief to know that if I take a career break, earn significantly less than anticipated or am out of work, then I will not have to pay contributions. Had my family situation been different, my sizeable debt may have discouraged me from pursuing internships and residencies due to the significantly lower average pay, but circumstances meant that I was already eager to advance within general practice instead.

Advice I would give to someone considering veterinary medicine as a career is that student debt only becomes a 'relevant' monthly figure as your wage increases. As it is taken directly out of your salary on a percentage basis you only have to start paying larger contributions when you start earning more, and as such, you don't notice the difference (just feel as if you are getting a smaller pay rise). I am a firm believer that I am very fortunate to be a part of this profession and would strongly urge any student keen to pursue the training not to be put off by the debt.

I was aware of the majority of costs involved in completing my veterinary degree when I started university, however, living costs in Edinburgh were higher than I expected causing me to look for a term time job. Throughout my five years at university, I worked one night a week at the Scottish Agricultural College as a librarian, and during each summer holiday I worked harvest at home. The money I earned working was not strictly necessary but allowed me to run a car in the later years of vet school and to enjoy some travelling, I would certainly have struggled to do these things without a job.

My student debt did put me off applying for veterinary internships as I felt I needed to look for a better-paid position in order to support myself. In the past year (three years post-graduation) I have considered the possibility of returning to education to complete a masters and/or PhD but do not feel at this stage that I would be financially able to without the help of further loans.

My advice would be – don’t let the finances stop you from applying to vet school so long as it is something you truly want to do. It is an expensive degree and it will more than likely result in debt but the debt is worth it if you end up loving your years at university and your future career. There is plenty of time to pay the debt off and plenty of support to help you do so, just be sensible about how much debt you allow yourself to get into i.e. don’t take out any extra loans or credit cards that aren’t absolutely necessary, and use your student loan carefully. Although tuition fees are now far higher than when I was at vet school my advice would remain the same.

It’s commonly known that getting into vet school is tough, and despite a raft of work experience, extra-curricular activities and good A-Levels, I did not make the cut. I made the decision to accept a place on a course studying animal science as I felt that gave me the strongest chance of successfully reapplying to vet school three years later. However, at the time I did not comprehend the financial aspects of this decision. The government will award a tuition fees loan for a person to undertake a degree, however if you choose to complete a second degree you must fund your tuition fees privately. The universities are able to set the fees for graduate entry students however they see fit. I was fortunate to get a place at a university which had chosen to cap graduate fees at £3,000 per year, however this varied considerably between schools to as much as £22,000 per year at some schools.

It was possible to apply for a student loan to help with living expenses which I did for the five years of my veterinary degree, in addition to the three years of my animal science degree. I did not live an elaborate lifestyle whilst at university, but the vet course is expensive. Travel costs and accommodation for placements mount up, and the amount of placements to be completed each year means earning money during holidays. This meant that I graduated with a student loan of £37,000 (three years at £4,000 per year and five years at £5,000 per year), an overdraft of £1,800, a private bank loan of £28,950 (£25,000 borrowed plus interest accrued over the five years of my studies) and credit card debt of £1,500. This meant having completed two degrees I left university around £70,000 in debt.

Student loans are repaid directly from your salary at a rate proportional to your annual income, and accrue interest at a nominal rate so the largest portion of my debt is not a serious concern. Over payments do not make financial sense so I will slowly pay this off throughout my career. However the credit card, overdraft and private bank loan all required regular payments commencing immediately, or shortly after, graduation. In the first instance this put some pressure on me to get a job immediately. I got a job in farm animal practice with a salary of £24,500 plus a car and fuel allowance which is roughly in line with average new graduate salaries. My monthly debt repayments are manageable but not easy, so saving for a mortgage deposit has not been achievable for me yet. However, I live comfortably (albeit not flamboyantly) but absolutely love my job which is worth a lot more than hard cash!

My advice to anyone who is in a similar position would be to consider if undertaking another degree is the best route into vet school, and if so, then consider how you will finance it and whether a career as s vet is important enough to justify entering a relatively modestly paid profession with a significant level of debt. I have no regrets about studying veterinary medicine as a second degree and have an incredibly fulfilling job that I love as a result.

I was aware how much debt I was going to be in when I graduated. I actually graduated with slightly less debt than I expected - £20,000 of student loan and nearly a £2,000 overdraft. Within a few months of working the overdraft was gone and I started paying off the student loan the following April (2005). I have about £5,000 left of the student loan exactly 10 years after I started to pay it off. I expect to have paid the lot off within the next three years (what a relief that would be). So for me I was at university for six years and it will have taken me twice that length of time to pay off the debt I accumulated. That, I think, is reasonable.

The size of the debt has meant that I have not been interested in internships or residencies due to the low pay, and so it has hampered me in terms of preventing me from specialising or becoming an academic, it did effectively force me into practice straight away. Once I have paid it off it will be a weight off my shoulders, I can then focus on mortgage, business loans and family.

My advice for those going to university with £9k a year fees would be just to forget about the loan. It is so high that most people will not pay it off. Best to concentrate on the career you would like and focus on. Do not be tempted to pay the student loan off early unless you are wealthy, as higher interest loans like mortgages and business loans are likely to creep up on you and you should focus on paying these off first.

If you have any feelings regarding veterinary student debt, members can share their thoughts or questions on the BVA community, it would be great to hear your views. The Vet Helpline offers a free 24-hour listening and support service (0303 040 2551) for anyone struggling with debt and needing support.

You can use the government's student finance calculator to work out your loan entitlement, track applications and check when payments are due. There is also information available about student loan repayments through the Student Loans Company and Money Saving Expert.