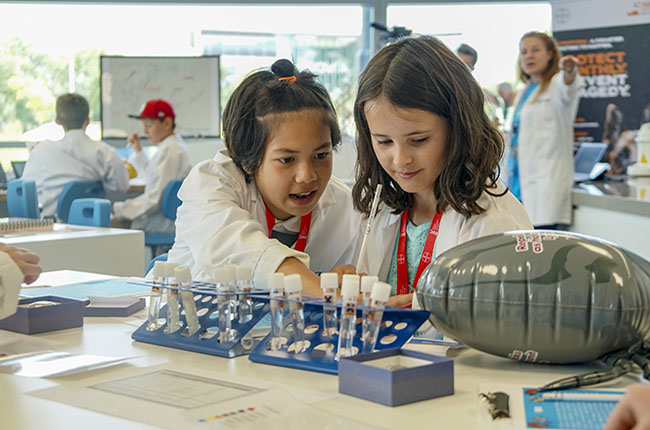 ‘What is the first thing we do when examining a dog?’ Gary Rutland, a vet nurse and practice support adviser at Bayer asked, as the company hosted an educational meeting at its HQ in Reading.

‘Cut off its head!’ exclaimed someone in the audience!

Laughter – as well as some expressions of concern – ensued before Rutland set the record straight. Working with Bella, a cavapoo, he then demonstrated a veterinary examination and explained what vets and vets nurses check for. His audience? School children keen to learn more about working with animals.

Rutland’s live examination of Bella was just one of the many hands-on workshops during two ‘Careers with Animals’ events earlier this month. The educational days, jointly hosted by the Royal Veterinary College (RVC) and Bayer, were attended by nearly 100 local school children. The first event was aimed at children aged 9 to 11, and the second was for those aged 14 to 17.

Veterinary teams from the RVC and Bayer led workshops on various career options that are possible through studying science and the vital roles the children could one day play if they pursued careers with animals.

The first day began with an encouraging start – a shower of hands flew up in the air when the children were asked ‘Who wants to become a vet or a vet nurse?’

Vet students from the RVC followed up with further questions such as ‘what animals would you like to work with?’ (answers ranged from dogs, cats, horses and reptiles) to ‘what pets do you own at home?’, with one child proclaiming ‘a giraffe’.

The children were divided into two groups, with the first group learning how vets use x-rays, look at skeletons, measure the heart rate of animals and apply bandages – all acted out with toy animals. The atmosphere was energetic and fun, with many positive interactions between the students and pupils clearly visible. 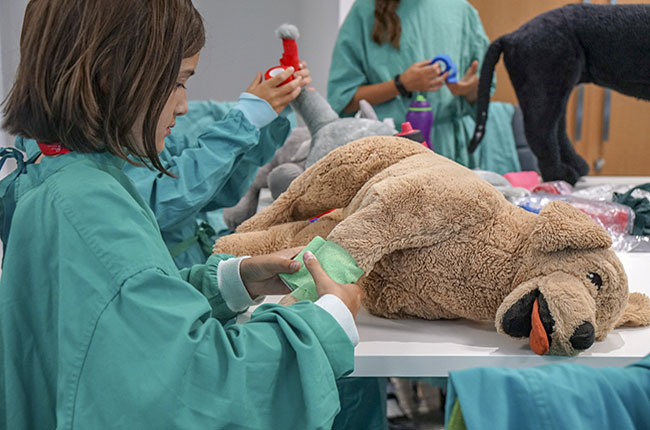 Lucy Eckersley, wild animal biologist and science presenter for the RVC outreach team, led one of the workshops. She was keen for the children to leave the event feeling that they were aware of the range of opportunities available to them: ‘It’s really important that days like this happen so that children can understand there are loads of different ways to work with animals. You can be a vet, or you can be a vet nurse, or you can be a biologist like me.’

The children relished the opportunity of examining parasites under the microscope though a few were a little cautious. One child nervously asked: ‘Are they really dead?’ and looked relieved when Wyatt confirmed that they were.

Next, the children were encouraged to complete a quiz on parasites and were asked practical questions on the kinds of organisms they may have come across in their own pets. Impressively, a couple of the children already understood how ticks spread Lyme disease, with one of the younger children confidently explaining the effects of the disease on dogs to her classmates.

Wyatt described the reality of working with animals: ‘We want the children to understand that it’s great to be passionate, but it’s also really hard work as well. They need to know the reality of it, especially the pee, the poo and the blood! But also, the really nice parts of it such as preventive health and animal welfare’. The aim of the sessions was to provide hands-on learning and honest experiences that children wouldn’t necessarily get from a traditional careers chat, she explained.

In an adjacent meeting room children had the opportunity to compare their jumping heights to some of the world’s highet jumping animals. Among the chatter of ‘I can jump the highest’, many children were surprised to learn that it is the flea that is the best jumper in the world. ‘But it’s so tiny!’ exclaimed one young boy with a very confused look on his face. 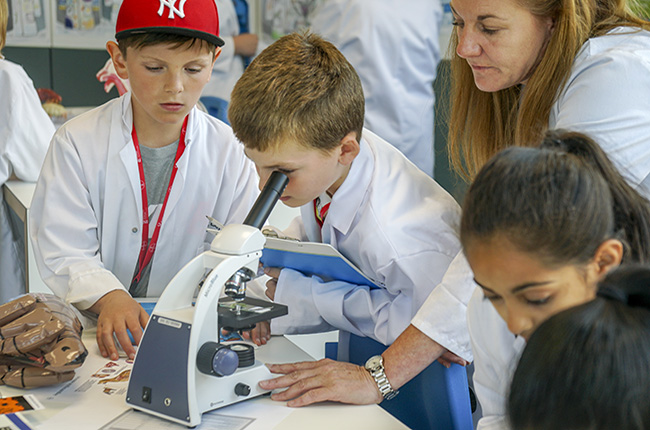 Back to the live dog examination. Bella held the school children’s attention during her live examination as Rutland explained the myth of dogs’ wet noses, the importance of brushing their teeth and how to check for ear mites, fleas and ticks on their coats. He also stressed the importance of dog walking and having access to water and healthy food.

All participants had shown an interest in pursuing careers with animals through individually submitted applications before the event, so Rutland asked the children about the types of science careers they were keen on. Many declared their intentions to work as vets, with a few children wanting to become marine biologists. To that end, one child had already been diving with sharks.

Another child said: ‘I want to become a vet nurse instead of a vet because I don’t like blood’. Rutland promptly cleared up this misconception.

Since 2015, the government has been reporting a skills shortage in science, technology, engineering and maths (STEM) subjects. It was this that prompted the RVC and Bayer to proactively nurture the next generation of vets and vet nurses via outreach work.

As a pharmaceutical and life sciences company, Bayer wants to enable children to be able to make confident decisions about their careers, by giving them a taste of what to expect from working with animals. As part of its widening participation programme, the RVC has a commitment to make sure the veterinary profession is a career option for all social groups. Both organisations are aiming to hold more educational events in the future. Ultimately, their joint aspiration is to encourage outreach on a bigger scale, going into schools and encouraging wider participation. 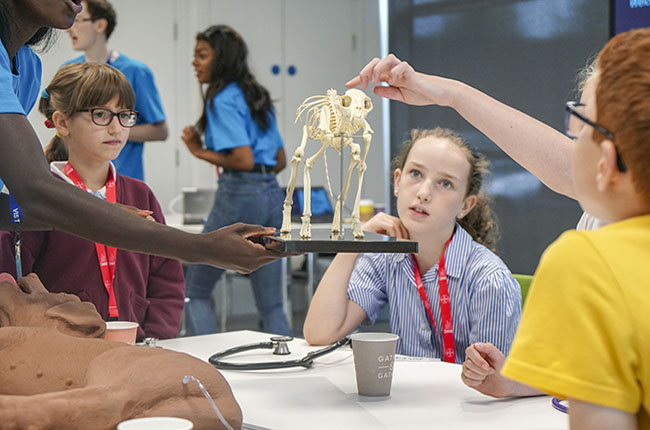 ‘Positive early experiences are important for young people choosing their careers,’ explained Grace Mackintosh Sim, RVC outreach manager. ‘We want them to be inspired and be able to make informed decisions about their next steps.’

It is also important to clarify that all careers are available to boys and girls, said Rutland. One of the reasons men showed little interest in becoming vet nurses could be down to a general lack of knowledge and understanding about the career, so it is important to address this early. ‘I think most men don’t know about it to be honest. That’s why this event is really useful, at a grassroots level; to actually say I’m a vet nurse, I’m a man, and that you can get a decent career out of it. They don’t realise what you do actually as a vet nurse, you do so much more than people think.’

The education sessions not only provided the opportunity to inspire young people to think about future veterinary careers, they were also great fun.

Rutland recalled a lightbulb moment when the children used a stethoscope for the first time and heard a heartbeat: ‘The look on their faces was priceless. It’s spark moments like that which make it worthwhile and real inspiration for the future.’